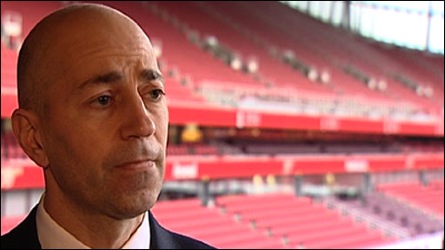 These in my opinion are the principal questions that should be asked of Ivan Gazidis (all in relation to Le Dictator of course) at the upcoming Q&A organised by the Arsenal Supporters’ Trust.

1. Why is Arsene Wenger not here? He is the manager but is unavailable for a Q & A? Is this acceptable? (Ed’s note – I assume this is a reference to the annual shareholders’ event with the manager, customarily held in May, which in fairness is a totally different one, not organised by the Supporters’ Trust)

2. Prior to this season starting, Arsene Wenger unequivocally declared that Arsenal would win a trophy this season. This has not happened. Period. Excuses aside (this means overlooking injuries that every team gets and ill-fortune) do you acknowledge that the management has failed in this regard? Unequivocal promises that are not delivered on surely amount to broken promises. Do you concur?

3. It was apparent to many that there were several shortcomings in the squad last summer that were not addressed. In particular the paucity of quality options in the goalkeeping department and the lack of cover in attack. Yet nothing was done. Now although we all appreciate that injuries are a blight, football has evolved into a squad game. And teams such as Chelsea and Man United have had injury situations as abysmal as our own - yet they have coped. There can be no excuse for the refusal to strengthen the team adequately last summer. Do you accept this?

4. In 2005 after Patrick Vieira was sold, Arsene Wenger and the Arsenal board asked supporters to give them their blind faith. Five years down the line and Arsenal have won absolutely nothing at all since the endemic culture of not replacing top players began. And it continues today: 'I would simply ask the supporters to trust us'. Do you accept that this trust has now been irrevocably broken?

5. Despite the supporters craving success for this club, the manager continues to systematically and effectively disregard the domestic cup competitions. This decision is rendered even more bizarre by the fact that more successful clubs like Manchester United go all out to win the League Cup and Chelsea make sustained efforts to win the FA Cup. In terms of a winning mentality and culture this is, again, an unacceptable mindset to foster in the club. It effectively tells highly paid professionals that they can pick and choose which competitions they turn up for. Do you accept the frustrations of the fans and the truth that this appears misguided and arrogant?

6. The money situation does not seem cloudy and yet, the paradox and culture of Arsenal secrecy seems to continue. Here is an example: this month we have heard Arsene Wenger claim that 'for the first time', he has 'money to spend' in the transfer market. (Ed’s note – I can’t locate this quote, but we’ll run with it) This strikes me as a peculiar statement, especially due to the fact that Manchester City acquired two of our key players for a combined total of 40 million GBP last summer, and Wenger publicly claimed that the leftover 30 million (after the acquisition of Vermaelen) was his to spend. So why do we now hear that he has money to spend 'for the first time'? Is this not at odds with what we were told last summer?

7. Arsenal's wage bill is extremely high. There is nothing wrong with paying top players their worth in a lucrative industry. However it is a constant source of bemusement that Arsenal continue to reward players excessively with new contracts despite targets having not been met. As a man with a strong knowledge of the business world, do you not find such a modus operandi strange?

8. Of course; this is unless targets are being met. In which case can we please clarify what the targets and objectives of this football club are once and for all please? Because my interpretation is that if Arsene Wenger is offered contract extensions and the players are also rewarded, this would intimate that they were performing and meeting targets. Yet there seems somewhat of a discrepancy here: Arsenal have won nothing for five years. Neither the manager, nor the players. Fans accept money might have been tight the first two years after the stadium move but now there can be no more excuses. Therefore is finishing third or fourth now the limit of Arsenal FC's ambition? If manager and players are being rewarded so handsomely, does this mean the targets are being met? And if they are not, then why are so many being rewarded so much for so little?

9. Fans want to win but accept that no team has a divine right to win every season. This is fair. However one thing that is nigh on unforgivable is a lack of effort. The annual reports tell us Arsenal have money. Deloitte tell us Arsenal are cash-rich. Equifax tell us that Arsenal is an extremely profitable business. Forbes also inform us that Arsenal are wealthy. Yet there are glaring deficiencies in the team that are not addressed summer after summer. This borders on negligence. Worse still, it now appears that many players are not trying and seem patently unaware of what certain matches mean to the fans. The end of the 2009/10 season has seen aloof and abject performances, with the manager at times even excusing this by claiming the players 'lacked motivation'. Considering the high premiums Arsenal fans are being charged, I find such statements unpalatable. There should never be an excuse for lacking motivation when paid princely sums for an honour most Arsenal fans would die for. Fans can accept not winning but fans will never accept lack of effort. Because effort requires no technique. It requires pride and self-respect. Do you accept that the fans decrying the lack of application towards the end of this season have a valid point?

10. Of most concern to Arsenal football club is that there seems to be no progression. Indeed Arsenal have been caught up. Just to clarify, Arsenal have not been a terrible side and have performed well in patches. Again however, it points to an intrinsic problem when you hear the manager claim that finishing in third place is an 'over-achievement'. Arsenal are a big club, we are not (with respect) Canvey Island. This season that was preceded with a cast-iron promise of trophies and no excuses has been met by no trophies and plenty of excuses. It has also seen Tottenham finish closer to Arsenal than they have in over thirteen years. Of course in part this is testament to how well we have done in this respective thirteen year period. However it does not disguise the fact. It has seen Arsenal also concede one of the highest goal tallies in the past ten years. It has seen Arsenal lose, an alarming almost 25% of their football matches. This is unacceptable. It has seen Arsenal lose, in resounding fashion, to every single big club we have faced this season. Considering that you Mr Gazidis, claimed just last summer that 'Arsene is subjected to the same pressure as every other manager of a big team', can you please tell me what you meant by that statement? Considering we have not once heard a public rebuke from the board or any concern about the performances and lack of trophies for the past five years? The only bits of leaked news we have heard concern contract renewals for the manager and season ticket price freezes. There seems to be very little emphasis on winning anymore and this will only serve to alienate a growing number of fans who fear they pay excessively for what they witness. The fans are the lifeblood of this or any club. Do the board take their feelings into account and accept that this culture of secrecy needs to change?

11. Arsenal have struggled in defence and this much is plain to see. How come a defensive coach has yet to be employed to improve this aspect of our play? There are former Arsenal greats that would love to become involved such as Tony Adams and Martin Keown. Tactically Arsenal have also struggled in big matches. Do you not think a new tactical recruit could have helped on the coaching side? This cannot be cost-related surely? The same can be applied to the goalkeeping situation.