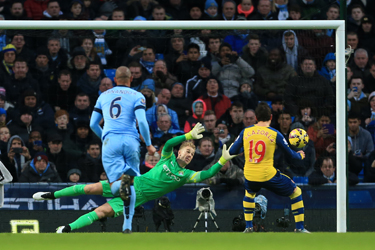 It’s Arsenal Jim, but not as we’ve known it. For once, an Arsene Wenger team went to a place no-one expected them to get anything, and played the game from the start with a plan not to lose the match. From this solid foundation, they were able to build attacks without going gung-ho, and beat the defending champions on their home turf. A fantastic achievement right up there with the best results Wenger’s teams have achieved in his long reign at the club.

When people ask me why I think Arsenal should contemplate a different manager, I ask them this: Do you think another manager could have won more honours with the players Wenger has worked with since the stadium move? And the win at Manchester City was proof that, playing in a more disciplined manner, with a tactical approach specifically tailored to counter the opposition, the Gunners can win big games, even when the odds are against them. It is possible that the players can adapt their approach even under Wenger. The huge frustration of course is, why it has taken so many seasons for this to happen. Still, better late than never. The hope is now that the discipline of this performance can be built upon, and the needless concession of avoidable goals can become a thing of rarity.

Santi Cazorla deservedly took the plaudits, covering literally every inch of grass and giving his finest ever performance in an Arsenal shirt. However, perhaps more key to the victory was Francis Coquelin. A player effectively rejected by Wenger (loan spells at Frieburg and Charlton in the last eighteen months for a player in their early 20s do not indicate someone in the manager’s plans). Mikel Arteta is out for three months. Mathieu Flamini is fit again, but first choice ahead of him is the younger Coquelin. Frank McLintock was on the radio yesterday morning bemoaning the lack of leaders at the club, prepared to ball people out. Thierry Henry on Sky Sports cited the need for the players in front of the defence to protect them more. Coquelin looked like the de facto captain on the pitch yesterday. With less than 20 Premier League starts in his seasons at the club.

Rather like Ashley Cole, it looks a case of a player that Wenger almost allowed to slip through the net might come good and solve a problem. Certainly, the performance at City will give the manager reason not to bolster his squad in the areas they are patently short, although an injury to one of Coquelin, Mertesacker or Koscielny would weaken the team, so financial prudence should not be the order of the day.

Coquelin was ably supported in midfield by both Cazorla and Ramsey. The latter was perhaps a little too keen to join attacks when the team were 1-0 up, although Cazorla was playing in a more disciplined fashion, which slightly mitigated the Welshman’s forays. It should be remembered that others also took turns to add to the numbers on counter attacks once the Gunners were in the lead – Bellerin and Flamini come to mind. It’s about finding the balance. Was it gung ho Gunners? By all staying back constantly, they would have invited too much pressure, so one can’t be too critical of measured attempts to relieve it. If the players work as a team, it’s ok for one man to join the attack from deep. Football intelligence.

And three points for Arsenal with Mike Dean in charge. That, in itself, is another collectors’ item. The penalty was a pleasant surprise. Kompany knew what he was doing, but fully expected to get away with it. It would have been called clever defending if he did. Cazorla’s strike was good enough to beat Joe Hart even though the keeper went the right way. Arsenal’s defending at set pieces was so much better than we have seen for most of the season. So many corners, so little danger. There looked more of a policy to attack the ball and physically challenge the opposition rather than mark space. City had one excellent chance to level the scores, but the slightest touch from Koscielny took the ball away from the path of Aguero who just needed to make contact to convert. It was a key moment.

Arsenal had a plan to deny David Silva the ball, which worked a treat. Yaya Toure is at the African Cup of Nations, and with him as one of the midfielders at the expense of Fernando or Fernandinho, different problems would have faced the visitors, but that is the price you pay for having African international players in the squad. City’s defending for the second goal (which might not have been scored if Toure did indeed play) was almost Arsenal-like, with Giroud having a free header due to a lack of concentration in the home team’s defence.

The pundits were calling it a ‘blueprint’ for Arsenal in the big matches. However, it was all very simple. This was no tactical masterplan, it was rather a case of doing the basics well. Winning a football match is partly about the positive things that your team can do, but when you do not have the ball, stopping the other side. Too often, the latter has seemed like an afterthought. But yesterday, Arsenal stayed compact and rarely gave away possession cheaply in their own half. They worked as a team rather than a disparate collection of individuals, and Coquelin, at the centre of the organization, was fundamental in this. With this approach, Arsenal can become a winning club again, by which I mean trophies. It is probably too early to happen this season. Chelsea are out of sight in the League as far as Arsenal are concerned. And the quality in the squad isn’t good enough to go all the way in the Champions League. But more results like this will breed confidence, and start to rebuild the aura that Arsenal have not had for a very long time. This result also means the Gunners can feel confident whatever the FA Cup draw brings them, assuming complacency does not return at Brighton next weekend.

If you want evidence of a sea change in approach, the fact that Arsenal enjoyed their lowest possession percentage (35%) since OPTA started recording the stats 12 years ago, yet put in one of the best performances seen since the regular trophy winning days, is highly significant. This was old style Arsenal. 1971, 1991, Cup Winners Cup 1994. Not always pretty, but damned effective. Soak it up, go forward in numbers selectively, but always keep an eye on defence. Whisper it quietly, but Arsenal looked like they were sent out by Jose Mourinho yesterday.

Aaron Ramsey did not credit Arsene Wenger with the change in approach, and the manager himself was bemused when asked in the post-match Sky Sports interview why he has waited so long to do this. His preference is for the players to work things out for themselves on the pitch. Which begs the question who exactly formulated the plan to play deep, deny Silva and soak up the pressure? Ultimately, it doesn’t matter as long as the team remain as tactically aware in the games that follow, and start building the kind of consistency and performance levels that can challenge for silverware.

The main thing is that, this morning, it feels like we have our Arsenal back.

I am now on Twitter@KevinWhitcher01.

The new issue of The Gooner can be bought online here. It will also be on sale at the away games at Brighton & Spurs and at home v Villa & Leicester.

DIGITAL ISSUES
The Gooner is also available in digital form, through The Gooner App on iPhones and iPads, the Exactly App for Android devices and now Kindle Fire owners can also get their fix by searching the Amazon App Store for The Gooner.

You can also subscribe at www.exacteditions.com and read it through your internet browser as well as receiving a code which will enable you to access issues on all the above devices.

All digital subscriptions include access to our digital back issue library which dates back to August 2010.

Further Reading
A sequel to Arsènal – The Making of a Modern Superclub and entitled Arsène and Arsenal The Quest to Rediscover Past Glories has been written by myself and co-author Alex Fynn. It takes up the story of the club from the last update of the previous book, and can be bought online here. Use the promo code ‘Gooner’ to get 10% off the publisher’s price of £8.99.