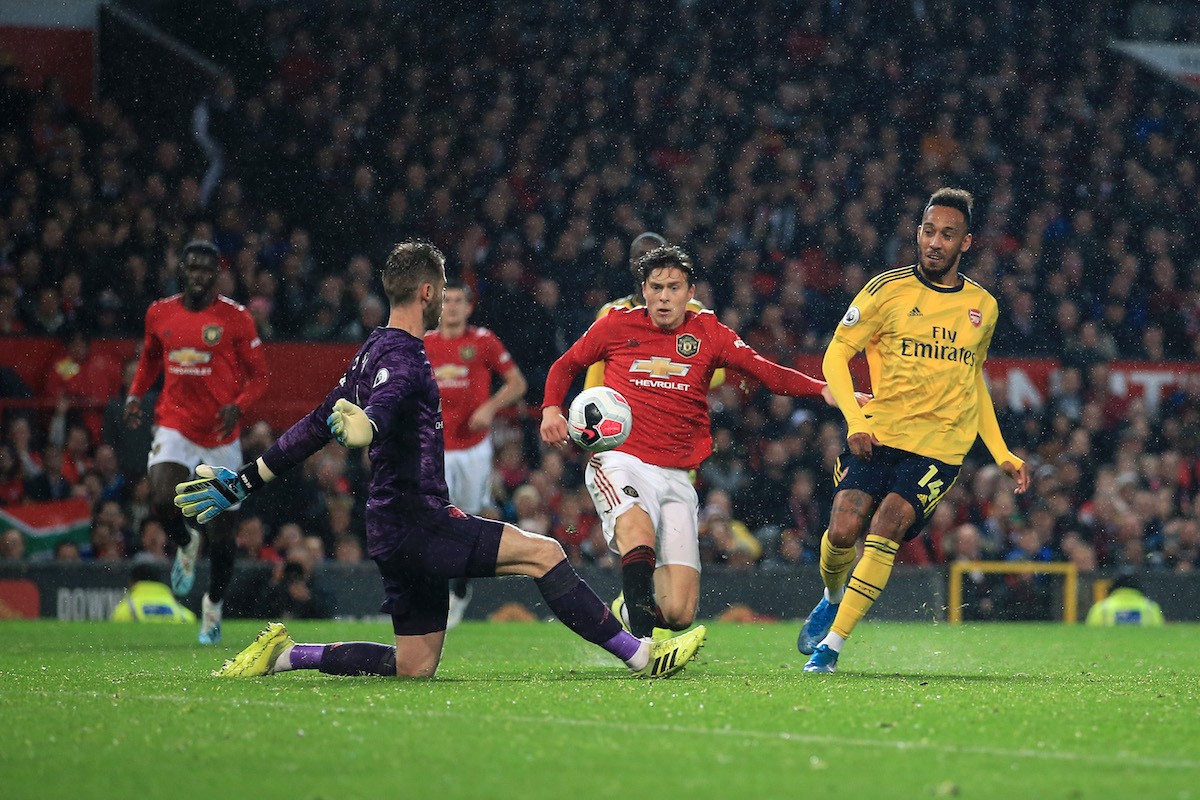 Auba nets and VAR does the rest

Man Utd and Arsenal? It had the feeling of two once great boxers coming together for a final payday, neither of them having the sharpness they once enjoyed to land the killer punch. These two clubs went head to head for the title during the Highbury years of Arsene Wenger’s tenure, and at times before enjoyed some memorable clashes, enough to ramp up the intensity to another level once it became a case of one or the other being the champions (between 1996 and 2004 no-one else got a look in).

Fast forward to 2019, and the reality is that we are looking at two average teams with coaches who can’t find a solution to bring back the glory of the days of old. Solskjaer will remember those as a player, but in spite of the riches his club has, cannot find the right blend to make them a feared side anymore. The fact is they were there for the taking, if Arsenal had any kind of bite in attack beyond the ability of Pierre-Emerick Aubameyang to shoot on target. Alex Lacazette cannot return to fitness soon enough. As for Pepe, I get that it is going to take him time to adapt to England and be on the same wavelength as his team-mates, but are you telling me you need a period of time before you can strike a decent shot on target?

Pepe wasn’t the only guilty party there though, plenty of his colleagues tried and failed on that score, rarely testing David De Gea in the United goal. The home side weren’t much better in truth, although credit to some of the Arsenal defending (some being the operative word here, it was poor on occasion) that prevented dangerous situations becoming more costly.

Arsenal rose from eighth to fourth thanks to the point gained, and on the upside, they are where they would settle for at season’s end having played three of the ten matches they will face against the other ‘top six’ sides, although Leicester might have something to say about that.

Unai Emery played safe with his defenders that were returning from injury. Rob Holding was on the bench, with neither of Bellerin nor Tierney in the eighteen. He gambled with a backline of Chambers, Sokratis, Luiz and Kolasinac. That they only conceded once has to be viewed as progress.

In midfield, Gunedouzi was immense, an example to many of his colleagues. For effort, the surprise selection Buyako Saka should be commended – he genuinely competed. However, it was the lack of challenge for a header on the edge of the United box from two Arsenal players (I’d have to watch it back to identify the culprits) that presented United with the break from which, ultimately McTominy scored. Too many of the away side did not look interested in really competing for the ball too much of the time, playing at less than 100%. Maybe they were wary of being reckless due to the difficult conditions. But it’s not something that is new.

VAR came good as Aubameyang was a good metre onside in the build up to his goal. And well played referee Kevin Friend for not doing what he would have done until this season and automatically blowing the whistle. The United players might have been distracted by the linesman’s flag, but they are all playing under the new rules now. It was a quality finish from Aubameyang who spent much of the game foraging on the left flank to try and get involved.

A good deal of the Arsenal crossing was suspect, so with that and shooting, there is work to be done on the training field. The attack normally get the defence out of jail, but it was more even last night in terms of performance. Good and bad moments at both ends.

However, given Arsenal have not won a league game at Old Trafford in the previous 12 attempts, the abiding feeling at the conclusion of the game was one of a missed opportunity. United really aren’t very good at present, and like Arsenal, have a good deal of rebuilding to do. Knowing this, perhaps Emery approached the game too cautiously, with the selection of his midfield trio. Perhaps starting Ceballos instead of Torreira might have paid dividends, but of course, we have to consider protection of a fragile defence. It’s all ifs and buts, the only certainty that United are not the force they once were, even at home, and that you cannot ever second guess the team Unai Emery is going to put out.

Ultimately, that probably doesn’t help. Granted, injuries are a factor, but once Alex Lacazette is fit, and the defenders are not being protected after returning from lenghty injuries, it would be a plus to see the same line up start a run of Premier League matches. That should help with understanding and a familiar tactical approach to games. Liverpool manage it, although they have been fortunate with the fitness of key players.

At the moment, it all feels like it’s a bit random, unsettled. The team cannot establish a groove with all the uncertainty. Yet, what was interesting last night was that, Chambers aside (who came on as a sub against Villa anyway), Emery began the same players in defence as he did for the last league match. So it’s not as if he drops anyone for a bad performance. Other factors seem to influence selection.

Still, in most seasons, a point at Old Trafford is regarded as a decent result. Arsenal now have a run of league matches against Bournemouth, Sheffield United, Palace and Wolves before visiting Leicester. Three of those at home. The trip to the King Power is then followed by games against Southampton, Norwich, Brighton and West Ham before Manchester City come to the Emirates. So nine matches to try and rack up the points.

It does already have a feeling of last season about it in terms of the Premier League table. Liverpool and Manchester City will decide the title between them (although Spurs and even Arsenal were involved for a while last time around), whilst the teams below them drop surprising points, stretched by European involvement and the development of clubs knocking on the door. People rate Leicester very highly this season, and they've certainly had a decent start.

Arsenal’s rebuild requires regular Champions League participation as the first step towards returning to the glory days of 1988-2005, when the club started every season with genuine hope that they could be in the mix for the title. Since then, there have certainly been opportunities to do that – 2008, 2010, 2011 and 2016 come to mind, but consistent failure has dented hope. It’s a phase United are now experiencing, so it can happen to anyone and is confirmation that football moves in cycles.

There were moments of genuine quality from Arsenal last night, but not too many, and given the opportunity, it was a shame they were not able to make more of a statement. Onto Liege and Bournemouth before the next international break then.

NB – The new issue of The Gooner is at the printers and will be sent out to subscribers later this week. If you do not subscribe, but wish to get the issue in the post, if you order it before 8am tomorrow (Wednesday) through our website store, we’ll send it to you post free (UK addresses only). If you wish to save yourself a bit of money, here's the link to order