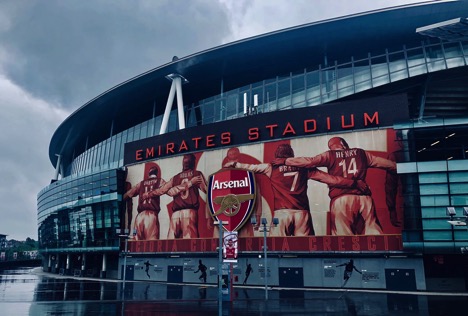 The life of a football fan is one of highs and lows. It's one of the adrenaline-laced surge of righteous victory or ignominious defeat. And then comes the excruciating percolation of drip-feed tension as the next match grinds ever nearer. There's always a long, restless night before a battle's grim dawn, and sometimes the best thing to do — the only thing, really — is to keep busy.

Here are a few ideas for how Gooners can stay busy between matches.

1. Make The Pilgrimage to Highbury Square

Highbury Square is now a swanky North London apartment complex, a glittering glass-scape of luxury urban dwellings, somehow stark and incongruous against the threadbare fabric of city life wrapped around it.

But set all that aside.

Ignore the couple in matching skinny jeans as they walk their designer Weimaraner Poodle mix to an upmarket bakery while discussing the intricacies of becoming a Wealthy Affiliate — because you're standing on hallowed ground.

Yep. This patch of well-cultivated soil was once the mud-churned battleground and the 38,000 seat stadium of Arsenal. We'll never see the team we love playing here again. Nor will we hear the combined throaty roar of near forty thousand believers pledging their undying fealty to the grimy, London sky.

But it's worth making the pilgrimage. It's right somehow, to see where so many champions trod the ground; to relive where their battles were hard-fought and narrowly won.

Based on the Nick Hornby novel of the same name, Fever Pitch is, before anything else, a love story. Set around Arsenal's First Division championship season of '88 and '89, Fever Pitch weaves the tale of a well-meaning teacher torn between two loves.

Any sports fan is likely to invest a lazy few hours watching a movie about their sport, especially if the story directly involves their team. But Fever Pitch, oddly, isn't really a movie about football, or even about Arsenal directly.

Ultimately, the story is about one fan's love of Arsenal, and how he struggles to fit the oddly-shaped peg of devout fandom into the square holes of his everyday life and human relationships.

If you've ever felt the stinging pain of your team's loss, and the following awkward transition into a happy family life, you'll "get" this movie. If you've had moments where you feel torn between the eternally unrealized hope to see your team achieve everything it was destined for and the simple demands of practical everyday existence, you'll smile at the complicated life of its protagonist.

You may also squirm a bit in awkward self-recognition.

3. Have a Pint at the Tollington

Yep. I know. There are a lot of pubs in North London you can visit for a pre or post-match drink, from the ridiculously desirable location and swanky flair of the El Comandante to the laid back, quasi-kitsch griminess of Tommy Flynn's.

The Tollington is — and I choose this word carefully — different.

Just over five minutes’ walk to the stadium, the Tollington falls short of being picturesque, lacks the claustrophobic shadows of a pub-goers den of beer-hazed iniquity, and isn't particularly historic (in a city where historical significance is measured in centuries, not decades). But the Tollington Arms is an Arsenal pub. You go there to eat, drink and feel the passion of fellow fans wash over you, like an old man's conspiratorial beer-whiffed whisper of loves long lost.

Whether you lift your eyes up to its wall of giant plasma screens irradiating any unfortunate soul within a six-foot radius is entirely up to you. The main reason to go there is to drink, eat, and for a brief blink of time be one tiny footnote in one small chapter of the grand Gooner story.

The Art of Keeping Busy

It's odd. It's easy to forget that being a fan isn't mainly about watching a match. It's mostly about waiting: waiting for the next game, waiting for your team to get its act together, waiting for all those disappointments and rivalries to transform into a brief moment where your team is on top, and everything is as it should be in the world.

Being a fan is about waiting, and what you choose to do with that time.

Whether it's making the pilgrimage to Highbury Square, sitting down to watch a story about an Arsenal fan in love, or just grabbing a pint at a cheerful pub a few minutes walk from the Emirates, it's important to remember one thing via freshfootball. These acts of devotion are not just marking time. Making a relationship real and lasting is about these little things, every bit as much as those big, soaring moments the movies spend so much time and breath selling.

There's an art to keeping busy, and those fan fires burning ardent and pure. If you need inspiration, these places are a good place to begin.