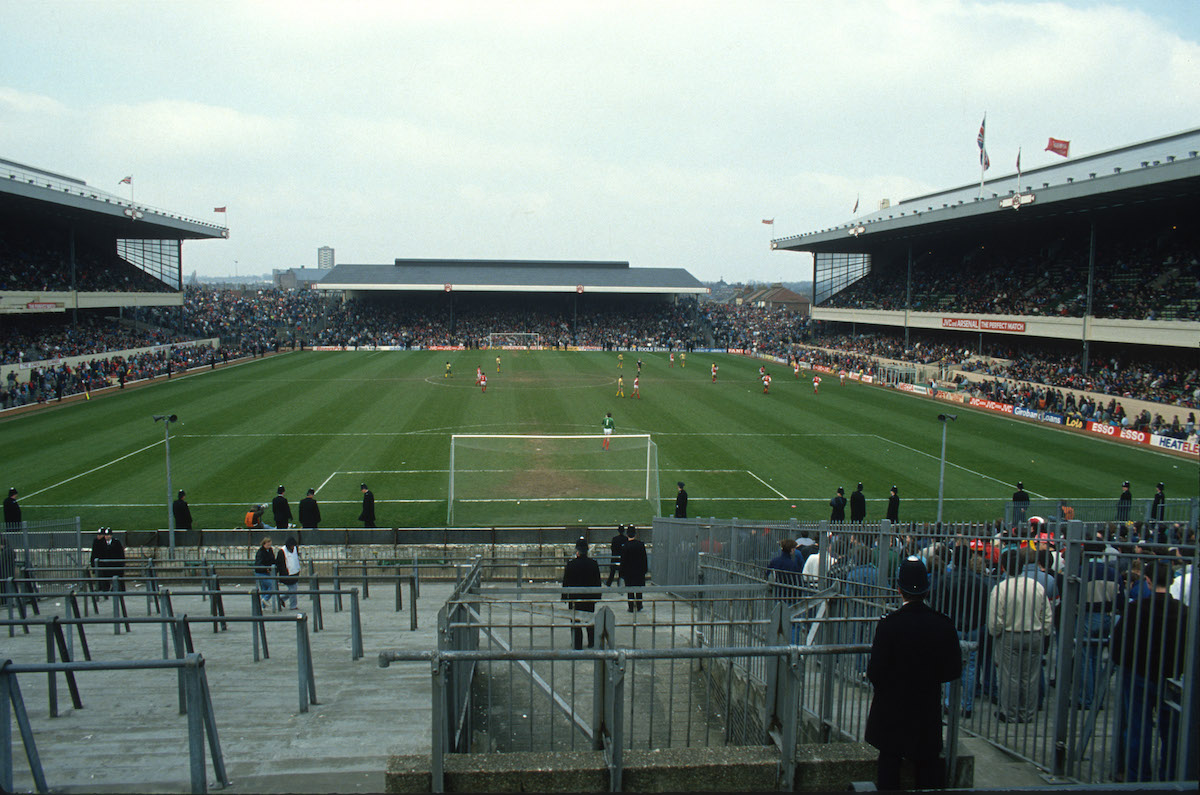 Arsenal Football Club has provided us with searing highs and crushing lows. Read on for a moving account of life as a Gooner - the good and the bad. Photo: Offside

I am about to watch my first ever Arsenal game. Islington is still predominantly working class. I clutch my dad’s hand, fearful but excited at what is about to happen, unaware that my life will change forever.

It is gun-metal grey deep midwinter. Already the light is fading. We are minutes away from the 3pm kick-off. A kick-off time that seems as immoveable then as it will become anachronistic in the years to come.

A tall, wide building looms at me, white-walled with indents for windows. The lettering reads Arsenal Stadium. We walk up substantial thick-set steps, my small legs aching with the effort. But what greets me when I get to the entrance is something that lives with me forever.

We are seated in the East Stand as dad has a bad leg. The crowd standing in the North Bank seems a vast, unknowable mass. Indistinct chants that I would soon come to know by heart create a sound that amplifies under the corrugated iron roof. All around me are twisting whorls of smoke and grumbling.

Grown men swear profusely. That, of course, shocks and attracts me. But it is the difference in tones of the swearing that intrigues. Some curse with real anger and aggression, others use it as a prop, more still use the words as nouns, adjectives and everything in between. But none are uttered without passion. Without caring. These Arsenal fans are loyal and long suffering. They feel the pain of every misplaced pass, of every miscontrolled ball, of every bad pass and failed attack. I begin to understand that passion comes suddenly, even though it takes me a long time to realise it can last a lifetime.

Dad looks at me. “Enjoying it?” he asks me, already knowing the answer. I nod vigorously, to show him how much I really love it. “It’s brilliant - but do you think we’ll win?” I ask with genuine concern. He looks at me with a slight uneasiness, aware of the weighty responsibility that comes with investing a love of a football club into his young son, with all that it entails. “Yes, of course”, he says slightly hesitantly. I don’t think anything of it at the time, I am simply reassured because dads are never wrong, are they? “Thanks Dad”, I say. “Thanks for bringing me”.

From the Junior Gunners enclosure to the Clock End terraces, then seats, via a couple of years in my early teens on the North Bank and now the Emirates press box as a full time journalist I reckon I must have seen more than 1,600 Gunners matches over that time.

Watching the Arsenal near and far is about the camaraderie

Watching The Arsenal near and far, is about the camaraderie, the sense of belonging, the dry humour, the gallows humour, the beers, the lock-ins, the joyous goal celebrations where, as a fan, you wonder if you’ll ever breathe again.

It’s about the crazy away days, the utterly miserable away days, the maddening, frustrating, brilliant, achingly awful, dreadful awful, wonderful, life-affirming days - and people you meet along the way – some of whom have become lifelong friends.

It’s also about the mishaps, the glory, the thrilling fightbacks, the crushing failures, the pain, the dedication involved not to mention the guilt at seeing loved ones hurt at the amount of time you invest in such an unfeeling institution.

I have been at the Parc de Princes and was part of the chorus that helped sing the first ever “1-0 to the Arsenal”. I sat in the Stade de France, 17 minutes from eternal glory; I have also sat stuck in a car in a muddy field in Wrexham after one of the biggest shocks in FA Cup history. I have had riotous nights out in Cardiff and Bradford on the back of crushing defeats and I have been surrounded by Real Madrid fans in the Bernabeu - before a kindly soul who couldn’t speak a word of English, thrust out a friendly hand offering me a full plastic cup of Rioja and a paper plate stacked with jamon. And when Henry scored one of the best goals in Arsenal’s history, the same man shook my hand and simply said, “Muy bien”.

Arsenal Football Club has provided me with searing highs and crushing lows, and despite our form, the quality (or lack of) of our players, our transfer news (or lack of), scandalous ticket prices and absentee chairmen, the fact is wherever I have travelled, Arsenal has been my lingua franca.

My friends and I spent once New Year’s Eve on the hard shoulder of the M6 after breaking down on the way back from Villa Park after a 3-0 victory over Aston Villa many moons ago. Sober.

I’ve drunk far more scrumpy than is necessary back in the days when pre-season involved a trip down to Yeovil in Somerset rather than Singapore.

I’ve been chased by Millwall fans through Dickensian back alleys, slept on roundabouts in France on European away games.

I’ve visited a mate in hospital in Copenhagen the day after the 2000 UEFA Cup Final – six years after we won the European Cup Winners’ Cup on our first trip there.

The same city, completely different outcomes on and off the pitch.

Arsenal always in my thoughts on my travels

I’ve seen us win every trophy we’ve won since the Eighties – if you discount the two and a half years I spent travelling a long time ago – and even then I managed to find BBC World Service in dusty Nicaragua to hear us win an FA Cup Final.

I’ve been stood on top of a stunning Mayan ruin in deepest Yucatan and had a conversation with a Mexican Gooner about the need for a decent reserve keeper.

I’ve been on a black granite Buddhist stupor in Java, chatting to an Indonesian about our transfer policy.

I’ve walked through Vietnam’s DMZ while a man whose grandfather was in the North Vietnamese Army asked me my thoughts on TH14.

I’ve been on a Roman fort in Sardinia and talked about the need for a back-up striker.

I have been on a ferry in beautiful Sydney harbour with my back to the Opera House and Bridge, engrossed in talk about Arsenal beating Spurs.

While working for a charity in Kampala, the capital of Uganda’s biggest slum, I had the unsettling experience of a child with HIV asking me about The Arsenal because he saw me wearing my Gunners shirt.

Although I had no way of comprehending his suffering, I could empathise with his passion. And when I told him just how good Bergkamp was, he smiled. It was the only smile I ever saw on his face.

With retrovirals in short supply I just wondered how long he would be able to support our team.

I cried from afar with David Rocastle and Paul Merson when they were forced out of the club, yet never forgave Ashley Cole, his traitorous crime amplified for me by the fact he was a former Junior Gunner.

I have seen moments of skill that have burned into my consciousness, from Glenn Helder absolutely skinning Stuart Pearce to Ian Wright Wright Wright twisting, turning and lobbing the ball over various Everton players heads before doing the same to that Big Nev Southall.

From Patrick Vieira blockbusters to my original hero Charlie Nicholas lighting up “by far the greatest team”, when to be fair there wasn’t much greatness about; a Kanu hat-trick at Chelsea, where he was so near the line they should have shouted “Mind the gap!” at Fulham Broadway.

I have seen Ian, Ian Allinson and Rocky scoring at White Hart Lane to send us through to Wembley, which still remains my favourite Arsenal game ever. I have also seen us ship five at the Lane, and seen us win the league there. I actually sat in the home end that glorious day. Unable to move when we went 2-0 up early on, my cheek started involuntarily shaking. It was nice to know at least part of my body still celebrated outwardly.

From a small shop counter run by Wales’ greatest-ever keeper, the kindly Jack Kelsey, to a global money-making enterprise known throughout the world. From Terry Neill, Don Howe, Gorgeous George and One-nil to the Arsenal, to the best attacking team that I have ever seen, which could also defend a bit - the 2004 improbable, immortal, Invincibles.

A small boy is about to watch his first-ever Arsenal away game. He clutches at his dad’s hand, fearful but excited, unaware of what is about to happen. Grown men in Arsenal scarves and hats, loiter, drink, smoke and curse outside. Within 20 minutes Arsenal are 4-0 down. The boy looks up at his dad, crestfallen. The man takes a deep breath and tries to console his son, who is on the verge of tears. The best he can manage is a pathetic, “It’s not over yet”. The six-year-old nods uncomprehendingly as his eyes well up. Two hours later - two crazy, joyous, ridiculous, life-affirming, life-threatening, hours later - Arsenal win 7-5 in extra time.

I stare at my son with a kindly look. “Did you enjoy it?” I ask him, already knowing the answer. He nods vigorously, to show me how much he really loved it. “It was brilliant,” he replies. I look at him with a slight uneasiness, aware of the weighty responsibility that comes with investing a love of a football team into my boy, with all that it entails. “Told you we’d win,” I joke. My son doesn’t say anything but is reassured because dads are never wrong are they?

“Thanks Dad”, he says, “Thanks for bringing me”, and I feel my throat catch.