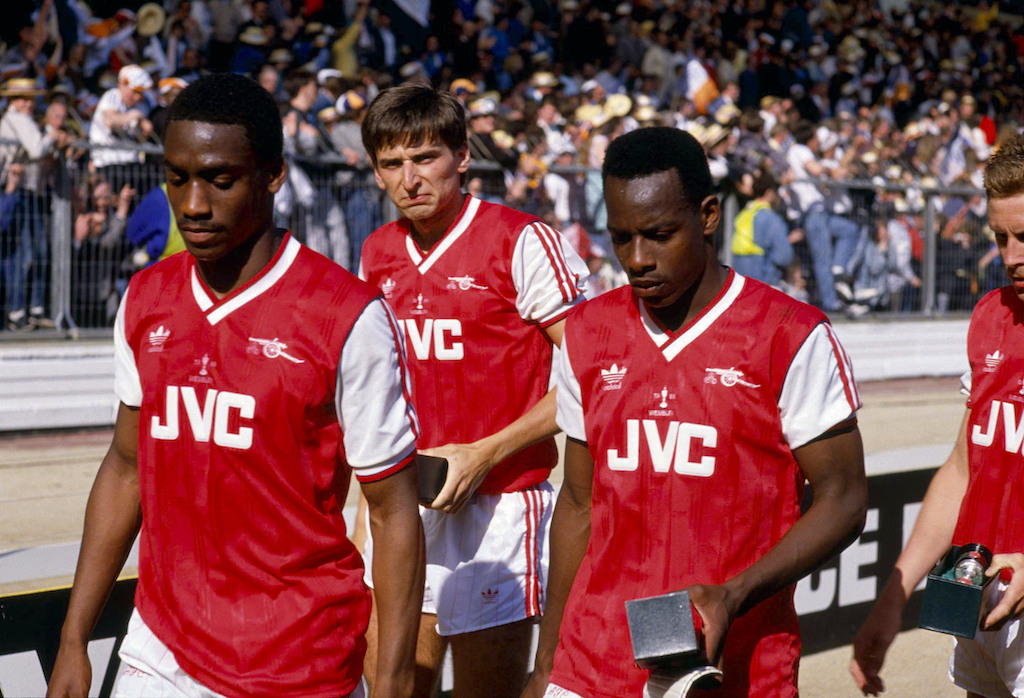 Dejected Gus Caeser, Alan Smith and Michael Thomas leave the field with their losers medals after Luton beat Arsenal 3-2 in the 1988 Littlewoods Cup Final at Wembley. Layth Yousif was there and recalls that disappointing day...CREDIT: OFFSIDE

It was one of those sunny days you always seem to get for Arsenal cup finals, against a team we had beaten at Highbury only a couple of months before, in Lee Dixon’s debut, funnily enough.

While Luton possessed a good side back then  - they were to end the 1987-88 season in ninth, only three places below the Gunners – as a kid still full of youthful belief Arsenal were simply the best team in the world, I was convinced we would repeat the previous season’s triumph against Liverpool.

I was there for that memorable 2-1 victory over Liverpool which was my first Arsenal final - and as I walked with my friends up from Wembley High Street for the showpiece final against Luton 32 years ago today I had utter belief George Graham's glorious team would win on that long-lost sunny day.

My pals and I had been to practically every game home and away that season and were all Junior Gunners season ticket holders, which meant we didn’t have much trouble getting our hands on tickets - but in a bid to get as many other mates into the game as possible we also applied through the voucher scheme in the programme.

I’m sure many of you will recall that in each home programme issued at Highbury back then there was a rectangular image on the inside back page, a small slice of a picture.

The thinking was that if Arsenal qualified for a cup final and you weren’t a season ticket holder, in a bid to assess your eligibility for the chance of a cup final ticket, if you collected all the vouchers, stuck them on a sheet and sent them to the club, you could qualify to receive one.

The theory was that the more vouchers you had, the more games you went to – meaning your reassembled photo full of vouchers you had assiduously cut out, each representing a match you had been to, would ensure you would qualify for a cup final ticket, as evidence of your constant attendance at games throughout the season.

Beating Everton in the semi's at a raucous Highbury

Or you could try and circumvent it as a schoolpal of mine tried to do.

Once Arsenal had qualified for the 1988 Littlewoods Cup Final by beating Everton 3-1 in one of the best atmospheres I can ever recall at Highbury – but that’s for a different article – my mate Sagey, went to Highbury to buy as many match programmes as he could, in order to boost the number of vouchers he had.

For those of you who think Arsenal’s shiny retail arm has always been about massive superstores then think again.

Back then the entire commercial output of one of the world’s biggest football clubs stretched to a small shop on Avenell Road, run by none other than Jack Kelsey.

Jack was an Arsenal legend who had loyally served the Gunners in the late 1950s and early 1960s as well as starring for his native Wales in the 1958 World Cup, where they were beaten in the quarter-finals by a Pele-inspired Brazil.

The club kept Jack on their books, allowing him to be in charge of the club shop, whose entire stock in the late 1980s appeared to be a selection of dusty key rings in stock, from the years before Terry Neill’s appointment.

Anyway, my pal Sagey eagerly bought an armful of programmes in order to bump up the number of vouchers as the watchful Jack looked on.

As soon as my schoolmate had paid for the programmes Jack inquired innocently. “Did you buy them for the voucher?”

Before Sagey had a chance to respond, Jack added: "…because they’re no good. They won't get you anywhere."

My horrified friend quickly flicked to the inside back page where the voucher was situated – only to see a big cross inked on it.

“See,” said wily old Jack, who had presumably spent the whole morning using a marker pen on the now-worthless vouchers to ensure cheeky scoundrels couldn't apply, adding with a wink, “they’re no good are they…?”

Memories of Wembley on that fateful day

I remember having to jump over one of those barriers that separated the pens in the terracing at the old Wembley to get to my pals who had tickets behind the goal but in the upper section.

After much squeezing through masses of humanity reeking of stale alcohol on those terraces with the big steps, I managed to find my pals a few minutes before kick-off. It seemed like a normal thing to do back then, but these days, without the safety net of a mobile phone to ensure you made contact, attempting to find your friends in a packed terrace seems like it belongs from a different lifetime.

That day the sun blazed down onto the Wembley pitch but large swaths inside the stadium and the stands were shaded. It was as if a spotlight was shining down on both sets of players. For me, this seemed to amplify the action on the bright green pitch, making the events even more vivid.

I also recall feeling slightly disappointed that there were ‘only’ 96,000 fans watching, when those big black boards behind both goals at Wembley announced the attendance midway through the second half - as my Spurs mates always used to brag about getting 100,000 for their FA Cup finals in the early 1980s.

(Mind you we did have the last laugh that year when Spurs lost to Coventry in the FA Cup in what they had termed, prior to the showpiece match, 'the proper cup'. Oh, how we laughed.)

Luton vs Arsenal, Gus Caesar and all...

We all know what happened during the match and it still scars me now, so I have no desire to revisit events in detail.

But, during the match, I do recall feeling far more upset at Martin Hayes hitting the post from two yards out, rather than Nigel Winterburn’s penalty miss, which was actually an excellent save by Andy Dibble.

I really don’t know if it’s an imagined memory or one from the moment it happened but in my mind’s eye I can – even now – recall Gus Ceasar’s hapless attempts to clear, before Brian Stein slotted home the winner.

I also remember, as the final whistle went, of not being able to talk. I literally couldn’t make a sound. I was too shocked and stunned. I was simply unable to speak, traumatised by what I had just witnessed. The only other time I felt like that was in Paris, at the Parc de France in 1995, after Nayim scored from, well, you know where.

Looking back an inability to speak was my way of coping with such an unexpected shock.

Even now it makes prompts pangs of regret. I used to work with a Luton fan in a newsroom and he only ever mentioned their victory four or five times a day.

I haven’t seen him in a while, but ‘JP’, if you’re reading this, on what you term Gus Caesar day, memories of the defeat still run deep - even if Arsenal's loss ensured I would never again take victory for granted...