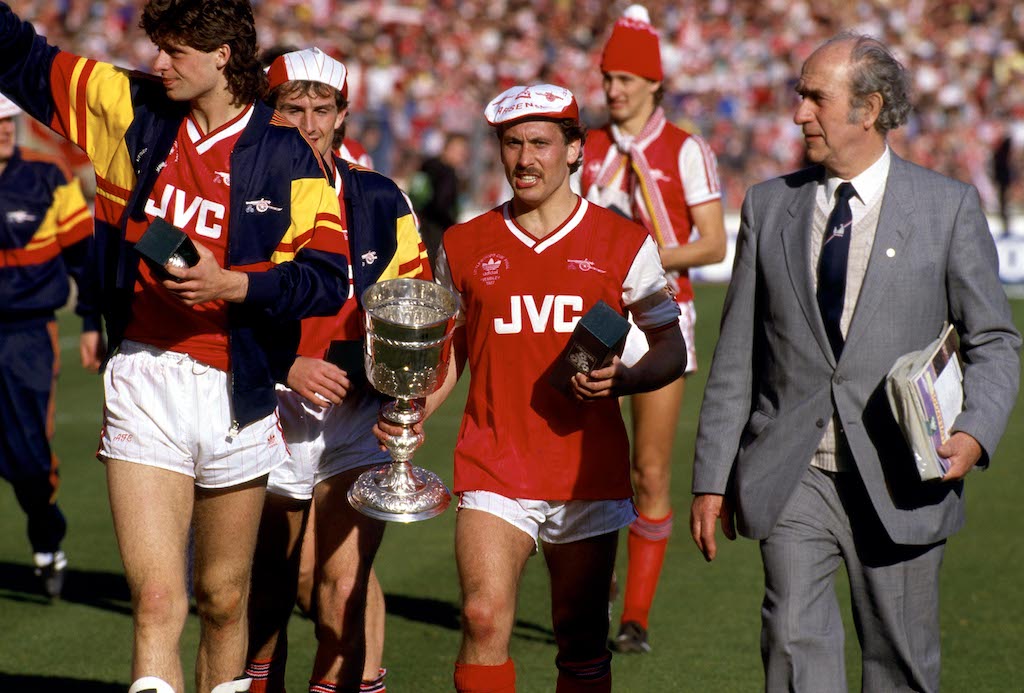 Kenny Sansom captained Arsenal to the 1987 Littlewoods Cup final at Wembley and will always be loved by true Gooners everywhere. CREDIT: OFFSIDE

It was with sadness but not altogether shock when the news came through that authentic Arsenal champion Kenny Sansom was back in hospital at the weekend.

The England and Gunners legend suffered a serious head injury during a disagreement but thankfully is well enough to sit up in his bed at the Royal Devon and Exeter Hospital, while his family keep a bedside vigil.

A source quoted extensively told them: 'He's not out of the woods yet. Ken's family and friends have been worried sick but he's a strong man. Things were looking bad but fingers crossed he's beaten the odds now.

'His family are still trying to make sense of what's happened but doctors say he had suffered injuries to his nose and head.'

The 61-year-old has suffered a string of a series of health issues due to a long-term struggle with alcohol, culminating in divorce, homelessness and depression.

'Kenny is currently ill in hospital,' it said. 'He is being well cared for and does not have COVID-19. Kenny’s family and close friends kindly ask the media to respect his and their privacy, plus that of the healthcare workers treating Kenny.'

Below is Layth's Take column where he pays homage to Kenny after watching the majority of his career and having spent time in his company and interviewing him a few years ago.

Kenny Sansom: Down but not out

I was a London boy. I wanted to go to Highbury. I wanted to be a part of the whole setup at The Arsenal. It was straight out of a Roy of the Rovers comic.
Kenny Sansom

August 1983. Kenny is at the height of his powers.

A summer previously he was ranked as one of the best left backs on the planet at the 1982 Spain World Cup. If not as good as Italy's Antonio Cabrini, or Brazil's Junior he certainly deserved to inhabit the rarefied stations that France's Manuel Amoros, or an ageing Paul Breitner held. He was certainly the best left back in England - Derek Statham, Alan Kennedy, Nick Pickering anybody?

Patrick cagoules, Fila tops, Diadora Pat Cash trainers and pink and grey diamond Pringle jumpers were the must have fashions in the North Bank and Clock End that summer of 83. KC and the Sunshine Band were No1 with Give it Up. Arsenal had just completed a tour of Indonesia, clinched an audacious signing by trumping Liverpool over a goalscoring centre forward, and there was hope in the air for a first trophy that decade.

Sansom mirrored the aspirations – he had just moved into a new house, been offered a new contract, was a long term England International, and playing for a club on the up as they took to the field for their first home game of the 1983/84 season against Luton Town. What could go wrong?

Three months later manager Terry Neil had been sacked, the final straw being a humiliating League Cup home defeat by Walsall - especially resonant for Arsenal fans as it brought back memories of the great 1930s team being humbled at Fellows Park in 1933, still one of the greatest upsets in FA Cup history.

The 83/84 team underperformed, weren't as fit as they should have been, didn't train as hard as they could and was riven with cliques. There was dissatisfaction with the board from the fans and any notional chance of the title had evaporated by early September.

The youngsters that would flourish under George Graham had yet to be blooded by Don Howe and there was a distinct lack of leadership.

Yet amongst the Arsenal players one man in particular stood up to be counted. "We are disappointed with our form as we know it simply isn't good enough for a club of our stature", Kenny was quoted as saying in November 83, "but Arsenal is my club and I'll always do my best for the supporters". This from a man who said joining Arsenal was "bloody marvellous".

Kenny shows character and loyalty to The Arsenal

For one of the best left backs in the world to show such character and loyalty to Arsenal at such a difficult time was taken for granted back then. It shouldn't have been. Imagine if it happened now? For Kenny back in that winter of 1983 there was certainly no agent planted stories of how the club didn't match his ambition, how he was unhappy with his new contract that failed to reflect his standing in the game, no mutterings of departure to pastures new, criticism of the club, board, manager, or fans, and certainly no self-pity.

Kenny was a true Arsenal man: he knew when to speak, when to keep quiet and when to let his football talk for him.
He also gave total commitment on the pitch, devotion, spirit and above all loyalty to this club of ours in one of our darker moments, even if he did like a drink even back then. What more can you ask of a player in the red and white of The Arsenal? Especially one that had true quality stamped all over him.

The team rallied somewhat, ending the season a creditable sixth considering the dire autumn they had experienced. Our South East Counties side was blooming, a certain Tony Adams had already made his league debut (in a miserable 2-1 home defeat by Sunderland) in that confused November of 83. There was talk of sparkling new talent coming through by the name of David Rocastle and by 1987 the club was resurgent, led by a passionate and hungry new manager called George Graham.

One of the few constants of that mid 80s era of turbulence and changing of the guard at Highbury was Kenny. He stood steadfast as a talented, loyal and honest symbol of the Gunners.

Of course nothing lasts forever, certainly not in professional football. Ironically at one of his highpoints, scoring a late winner against a determined West Ham side in front of a delirious North Bank on his 29th birthday in September 1987, the writing was already on the wall: the ruthless Graham had already given a debut to a former Wimbledon left back that month, albeit at right back with the name of Nigel Winterburn.

At the Mexico World Cup the previous summer the signs were there if you knew where to look. Sansom who had always relied on his deceptive pace despite his stocky build (and increasing penchant for alcohol) along with his uncanny timing and ability to nick the ball off attackers before starting dangerous counterattacks was left for dead by Maradona during his stunning non hand of god goal. It was the first sign that Kenny's legs were going, for Sansom had matched the young Maradona for pace in a 3-1 friendly win at Wembley in 1980.

Yet it was a sign of the respect and high standards that Sansom, (unbeknown to the majority already battling the demons that were starting to emerge from the shadows) kept his place at left back that whole season ahead of the burgeoning Winterburn.

However, Sansom knew his time was coming to an end. In an early training game Graham and Sansom watched the new lad. After a minute the Scot turned to Kenny and said: "now that's how you play left back".

It was a mark of Sansom's inherent decency that even in his autobiography, where points scoring from embittered ex pros is expected, he actually thanked Graham and Terry Neil for all their help, even wishing that he had listened to them more.

So it was on April 5, 1987 that Kenny, as captain of Arsenal Football Club, lifted his first and only piece of silverware after we had beaten Liverpool 2-1 in a glorious League Cup Final.

I was at Wembley that day as a kid. I couldn't understand why big hairy arsed blokes all around me on those huge terraces were hugging each other on the verge of tears; some even shouted "eight f*cking years" in an outpouring of emotion. I didn't realise back then the relief a trophy brings, the catharsis of it all, almost an exorcism of bad times past.

That is what those supporters were crying about even if they didn't see it in those terms. All they and I knew back then was that Kenny Sansom had played his part in my team winning the Littlewoods Cup. And I loved him for it, like I loved them all.

What has happened to him off the pitch since that marvellous sunlit spring afternoon only raises more questions than answers. Should football carry a health warning or does individual behaviour precipitate the road to ruin? Do the choices we make condemn us or are we helpless in the face of addiction?

Arsenal have lost Paul Vaesen and Tommy Caton to addictions. I truly hope Kenny Sansom isn't added to that list

Whatever you think of a man who once lived in a mock Tudor mansion ending up using his shoes for a pillow on a park bench, the fact is Kenny Sansom was, is and always will be a genuine Arsenal legend. He stood by us in one of our darkest moments: we should stand by him in his.

So Kenny, thank you for your faithfulness, dependability and allegiance, for the memories, good and bad, and for the fact, from the day you pulled on our glorious red and white you have always been an Arsenal man through and through.

Arsenal fans don't forget loyalty to our cause and even if our throats catch at the awfulness of his plight since leaving football, say a prayer for him and recall his magisterial pomp as the world’s best left back – it's the least we can do for a true Arsenal man who has fallen on hard times.