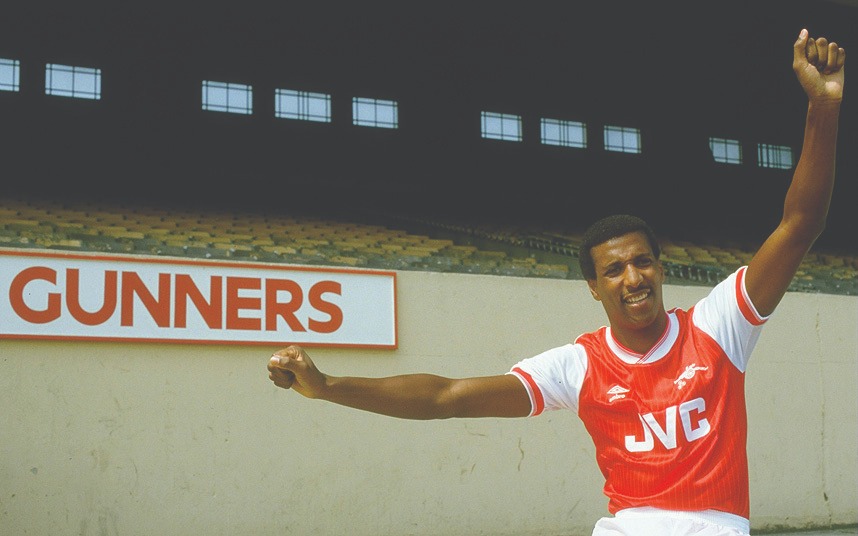 In the era of George Graham’s Arsenal, the development of the team was more revolution than evolution. PICTURE: Viv Anderson at Highbury. CREDIT: OFFSIDE

The Gooner Fanzine's Highbury Librarian casts his unique eye on Arsenal stories and players from the past.
Read on for his take on Viv Anderson entitled: "When A New Broom Starts A Revolution"
Picture the scene: our new manager has just completed his first season. He’s an ex-Arsenal player, and was appointed at a relatively young age, never having previously managed in the top-flight. Before his arrival, the club has been in the doldrums, and the decline must be reversed.
Encouragingly, the new manager’s first season has (following a memorable semi-final win) ended with a trip to Wembley, where we have faced a top team, beaten the odds and lifted a cup.
Things are looking up, but at the end of the 1986-87 season, George Graham is looking to make changes. One might say he is a new broom ready to sweep clean. If so, which players will be swept away to make room for Graham’s recruits? Well, just then, our international right-back – Viv Anderson – receives a call from Manchester United.
“At the time of the call, Anderson had just enjoyed his most successful season with Arsenal. The team, brimful of talented youngsters, had taken the First Division by storm in the first half of the season and had won the Littlewoods Cup in the second. Under the forceful and disciplined leadership of George Graham, there seemed little doubt that they had begun a promising new era. Anderson’s three-year contract finished at the end of July, but his experience and his example were badly needed to balance the club’s youth, and not only did Graham have every intention of keeping him, but Anderson had every intention of staying.”
Longmore (1988), Viv Anderson, p.106
Despite feeling optimistic and settled at Arsenal, Viv met with United’s representatives.
“Anderson’s first meeting with United’s top brass was unexpectedly comical. After the initial contact had been made, he was invited to meet the United chairman Martin Edwards and the manager Alex Ferguson. For talks that were supposed to be secret, the venue, the Albany Hotel in Nottingham, could not have been worse. Anderson arrived at the room booked for the meeting to find no sign of either Edwards or Ferguson. waited for a time and then Martin Edwards sticks his head round door: ‘Have you seen the manager?’ he asks. ‘No,’ I said, ‘Well, I’ll just go and find him,’ he said and off he went. A few minutes later, Alex Ferguson comes in: ‘Have you seen the chairman?’ ‘Yes,’ I said, ‘he was in here a minute ago looking for you.’ ‘Right, I’ll just go and find him,’ and he disappeared too. And I’m sitting in the room thinking, ‘What is going on?’ It was a bit like a scene from Fawlty Towers, but eventually we all got together and I was very impressed with what they had to offer.”
Longmore (1988), Viv Anderson, p.106
So, by how much would Viv’s departure help to fund Arsenal’s transformation?
“There was only one final wrangle to be sorted out. How much was an England international full-back, aged thirty-one with boundless enthusiasm, considerable skill and dodgy knees, worth? Arsenal said £400,000, United £150,000. The tribunal decided £250,000, £25,000 more than the sum Arsenal had paid for Anderson from Forest three years earlier. At least the currency had not been devalued too much.”
Longmore (1988), Viv Anderson, p.107
A few months later, in January 1988, a twenty-three-year-old Lee Dixon arrived from Stoke City for £375,000.
One might find it surprising that the market valued the relatively unproven Dixon more highly than a European Cup winner.
Viv’s valuation probably reflected his age and – though free agency was yet to arrive – the imminent end of his Arsenal contract.
To sweeten the deal, United welcomed their new star with a tasty motor.
“The club provided an Escort XR3i convertible – which had not been a perk of the job at Arsenal – and someone to look for houses and make appointments. Everything was done to make him feel at home. In return, though, Anderson felt that he had to do that little bit more for the club. ‘You have to treat every game like a cup final here,’ he said. ‘Otherwise you will get turned over, and for a club like United that would be lethal.’ A poor first home match, ironically against Arsenal, plunged Anderson into the depths of despair, from which he and his confidence took time to recover.”
Longmore (1988), Viv Anderson, p.108
While we can be sure that his dodgy debut against the Gunners pleased the Arsenal faithful, few, if any, of those connected to our club would have wished Viv any measure of misfortune.
For us, he had played with skill, elegance, an appropriate measure of brutality and tremendous commitment.
In that era of George Graham’s Arsenal, the development of the team was more revolution than evolution.
The brilliant Viv and Kenny gave way to Lee and Nigel. The new generation would reinvigorate the squad and set the Club on course for multiple League titles.
Now as then, Mikel Arteta is seeking to rebuild the club from cup success to league glory.
We should expect that, like Viv, some (even some solid contributors) among Arsenal’s current squad will be there at the start but not at the end.
Read more from the brilliant Highbury Librarian online and in our printed version of the Gooner Fanzine in the forthcoming season.
Save The Gooner Subscribe to the printed version to help keep us in print for the 2020-21 season Save The Gooner