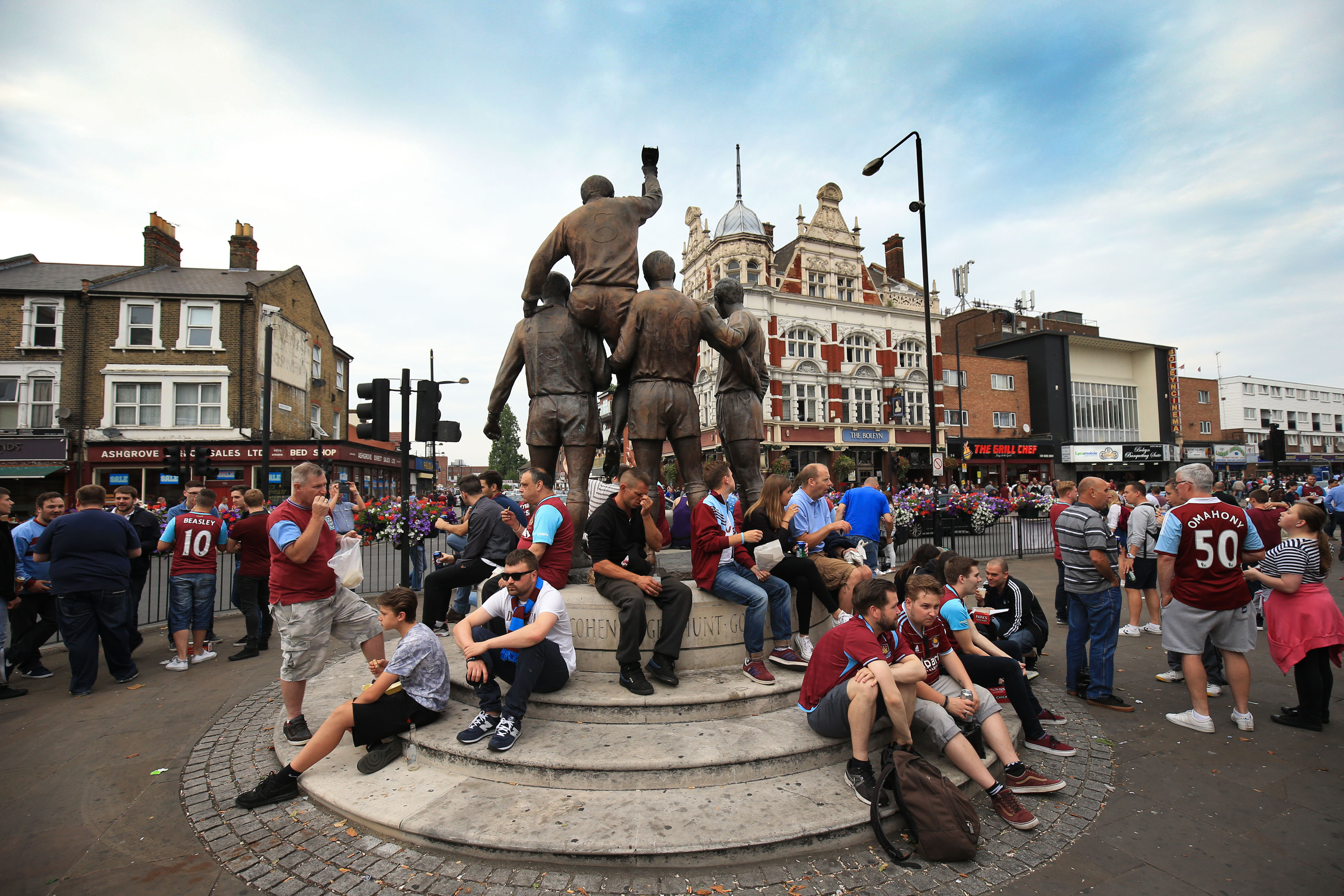 The statue of Moore, Hurst and Peters near Upton Park. Gooner writer Peter Le Beau recalls an Arsenal side taking on the 'World Cup winners'.

The day we beat  England’s heroes
It is always difficult to explain the way football used to be to anyone who has grown up surrounded by social media and who has watched a large part of their football on television.
During the summer, just after the death of Jack Charlton there was a lot of publicity about the World Cup Final of 1966. The game was shown in full on Channel 4 and Sir Geoff Hurst and most of the principals (many sadly passed on) gave interviews about the biggest moment in English football history.
That it was fifty four years ago suggests the English football history cupboard is relatively bare. But at least we had that glorious July day in 1966 (actually it wasn’t that glorious, it rained on and off all day).
But what has this to do with Arsenal?
Amazingly (although in the context of post lockdown football perhaps not) the new 1966-67 season began two weeks later.
Arsenal under a new manager Bertie Mee with a new coach, Dave Sexton, began at Sunderland, who played then at  Roker Park and won 3-1.
West Ham were basking in the glory of supplying three members of the World Cup winning team, Moore, Hurst and Peters. To be fair it was a pretty glorious moment.
Bobby Moore was imperious as captain, Geoff Hurst scored a hat-trick and the other goal was scored by Martin Peters.
If you ever went to Upton Park there is a statue outside the Boleyn pub of the three heroes but in the middle of the group is Ray Wilson who as far as I know never ever played for West Ham.
We would never have commissioned a statue with the Everton left back in a place of football pilgrimage. Little fans would be photographed in front of that statue giving the customary ‘Irons’ salute as part of a rite of passage in becoming a Hammer.
No accounting for taste.
I lived in South London and didn’t meet many Gooners, not that they were called Gooners then but fortunately I didn’t live anywhere near the East End.
Their fans were insufferable and lorded it for those two weeks until the season began. But then it all went very West Ham. On the day we were winning against the Mackems, West Ham entertained Chelsea.
There was no live football then, it was in black and white and only one game was shown on Match of the Day. No highlights from all the games then.
Charlie Cooke a mercurial Scot, a brilliant dribbler and a man who allegedly enjoyed a ‘ lively ‘ life away from the pitch dominated and England’s finest slumped to defeat.
Never mind Hammers, on the Wednesday, West Ham had to travel to Highbury to face an Arsenal team who had finished the previous season in disarray and had parted company (or were about to) with their two best players - Joe Baker and George Eastham.
Imagine losing Aubameyang and Ozil (imagine if he were  actually playing) let’s substitute him for Tierney in the same window!
West Ham were hot favourites to win at Highbury. That West Ham team won the FA Cup in 1964 and the Cup Winners Cup in 1965 ( at Wembley) so they were used to silverware ( not something you can often say about West Ham). Arsenal were a new young team.
The hub of the team was Frank McLintock and Jon Sammels in midfield. Sammels had the best mod haircut in football and a shot like a blast from an elephant gun.
That Arsenal team unfancied as they were started like a rocket. We were 2-0 up at half-time through John Radford and Tommy Baldwin who was shortly off to Chelsea as part of the deal that brought George Graham to Highbury.
West Ham battered us in the second half and reduced the arrears through Johnie ‘Budgie’ Byrne but an Arsenal defence with Jim ‘Fingers‘ Furnell in goal (older Gooners won’t need reminding how scary that wasn’t!) and Terry Neill and Ian Ure at centre back held out to record a momentous victory in a cracking match.
Going to any game with West Ham in the sixties and seventies was always a risky affair. The Inter-City Firm were notorious and not without good reason and there was always a battle to take or hold the North Bank.
That night we resisted the quality of a fine side and the following week drew 2-2 at Upton Park. A team was taking shape. The home game was Alan Skirton’s last match for Arsenal, Peter Simpson came on as sub (the only one allowed) for him. Storey, McLintock, Armstrong and Radford were double winners five years later.
Graham and McNab were about to join and Bertie Mee, the physio turned manager made a decent fist of the job after a rocky period a few weeks into the season.
As for West Ham that moment in July 1966 was the high- water mark for the East London Club.
A rather perverse fact really that the best thing ever to happen to your club actually happened in a match the club never played in!
As they face us on Saturday evening the fortunes of the clubs appear to be moving in very different directions but as that  game in August 1966 showed and as we saw in the first game three seasons ago London derbies, particularly early season ones can be very unpredictable.
Save The Gooner Subscribe to the printed version to help keep us in print for the 2020-21 season Save The Gooner