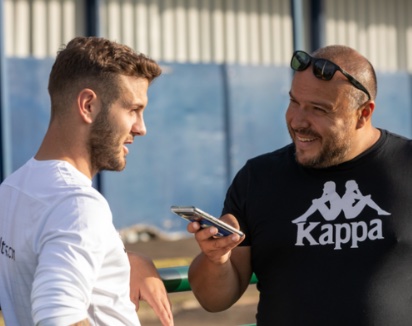 So, the tantalising prospect of Jack Wilshere returning to The Arsenal grows stronger by the day.

The former Gunners youth and academy star who played his first Premier League game for the club at the tender age of 16 could be returning to his spiritual home.

With Emirates boss Mikel Arteta making encouraging noises recently after saying that his door is always open to the 29-year-old former England international, could Wilshere really appear once again in Arsenal colours?

Read on for Five Reasons why Jack Wilshere and Arsenal would be the Perfect Match.

Having known Jack and his wonderful family for a number of years now he is a deep thinker on the game and his knowledge around the sport is second to none.

I have no doubt he will go on to become a successful manager should he wish to pursue that avenue further down the line. When he invited me to his mansion to conduct an in-depth interview a couple of seasons ago, he told me that Pep Guardiola ‘killed him’ with praise in a famous line that has been used many times elsewhere ever since.

The quote was in reference to the night 19-year-old Jack outshone the stellar talents of the mighty Barcelona team led by Guardiola back in February 2011, when the Gunners eclipsed Barca 2-1 in what has proved to be the best game played at the Emirates in its 15 year history.

If it were not for the injuries that even Jack has admitted have blighted his game and stalled his career, we could be talking about one of the best English midfielders in the history of the game.

And it is because of that unfulfilled talent that his motivation to succeed still burns brightly. Jack’s drive to lift silverware at Arsenal remains undimmed. After all, who will ever forget his now legendary celebrations the morning after the night before in the wake of the 2014 FA Cup final victory, when he let the world know what he thinks of Tottenham during that wonderful Sunday morning at the Emirates after the 3-2 victory over Hull City at Wembley.

At the still young age of 29 Jack still wants to savour those moments again with Arsenal.

With a pay as you play deal he could.

2 - No financial burden on club:

Which brings us to the question of cost – which is no cost at all as it’s a no-brainer.

No signing on fee, no burdensome salary. Simply an honest pay as you play deal. If Jack is injured the club won’t have to shell out a penny in wages or any other form of payment.

Knowing Jack as I do, he would literally work for nothing if it meant playing for his beloved Arsenal again.

If it worked out of course it would then follow that he would receive renumeration, especially if his presence inspired the club to greater heights once again. No-one would begrudge him that. Just like no-one should begrudge him a pay as you play deal.

The Gunners would certainly be getting the better of the deal even if he were to be injured.

Because, just imagine his presence and sheer will to win rubbing off on the squad, every day in training, even if he weren’t fit enough to play.

3 - Wilshere is made of the right stuff:

He hails from the same town as I now live in and my kids attend the same school he went to. Modest Jack is proud of his roots and kindly donated a shirt to the school in recognition of their support in allowing him to train with Arsenal as a young teenager.

Jack does so much unsung work boosting local teams in and around the community and further afield, whether it is through funding new kit for cash strapped junior sides or boosting a youngster fighting serious illness who plays for the local girls team Jack is always willing to help out.

He is fiercely private and normally refuses to allow me to publicise such events because he wants his work to be kept secret. Occasionally I simply write about it anyway because such good deeds deserve to be highlighted. Imagine the impact such a force for good would do as a role model to all those Arsenal youngsters.

4 - Wilshere understands the Arsenal Way and ethos of the club:

As someone who has shared a football pitch with some of the big names in the game Jack would have no problem fitting in at Arsenal. Imagine him lining up alongside Thomas Partey, allowing him to flourish, through his excellent positioning, tenacity, positional awareness and, yes, world class creativity.

Jack also understands what it means to be an Arsenal man. He knows the club inside out and he knows the fans. Who in turn absolutely love him. He would also serve as an inspiration to the club’s talented young players now that Project Youth is back on the table after Edu’s revelation recently.

Wilshere would take no time in settling back into the club and his work ethic and drive for success allied with striving for perfection each and every day in training – no slacking off for Jack, he wouldn’t understand what that meant – would result in the squad being far better for his presence. Further down the line, Arteta could even help boost Jack when going for his badges to ensure succession management. Because make no mistake, Wilshere will become a top manager If he so wishes, thanks to his perceptive and constant analysis of the game.

One of the things that struck me when spending time with Jack over the years is his passion and knowledge of the game. Whether it be through coaching youngsters through his commitment to youth football (one of my claims to fame is to have shared a kickabout with Jack on a full sized football pitch) or when simply chewing the fat about sport, Jack knows sport inside out.

I recall having a conversation about a mutual friend who is a rising star in boxing circles and Jack knew all his stats and where he had fought. As much as I agree our pal is going places we weren’t exactly talking about Antony Joshua – but Jack’s discussion was well informed and intelligent.

Whatever the topic in football, from the Champions League to non-league football to our mutual local team, Hitchin Town, when it comes to sport, quite simply: Jack knows.

‘I’m sure I’ll have a conversation with someone at the club over the next couple of days,’ said Jack this week. Judging by the fact he hasn’t replied to my WhatsApp messages  recently (he normally does) something is very much in the offing. Let’s hope so because Arsenal and Jack would be the perfect match.