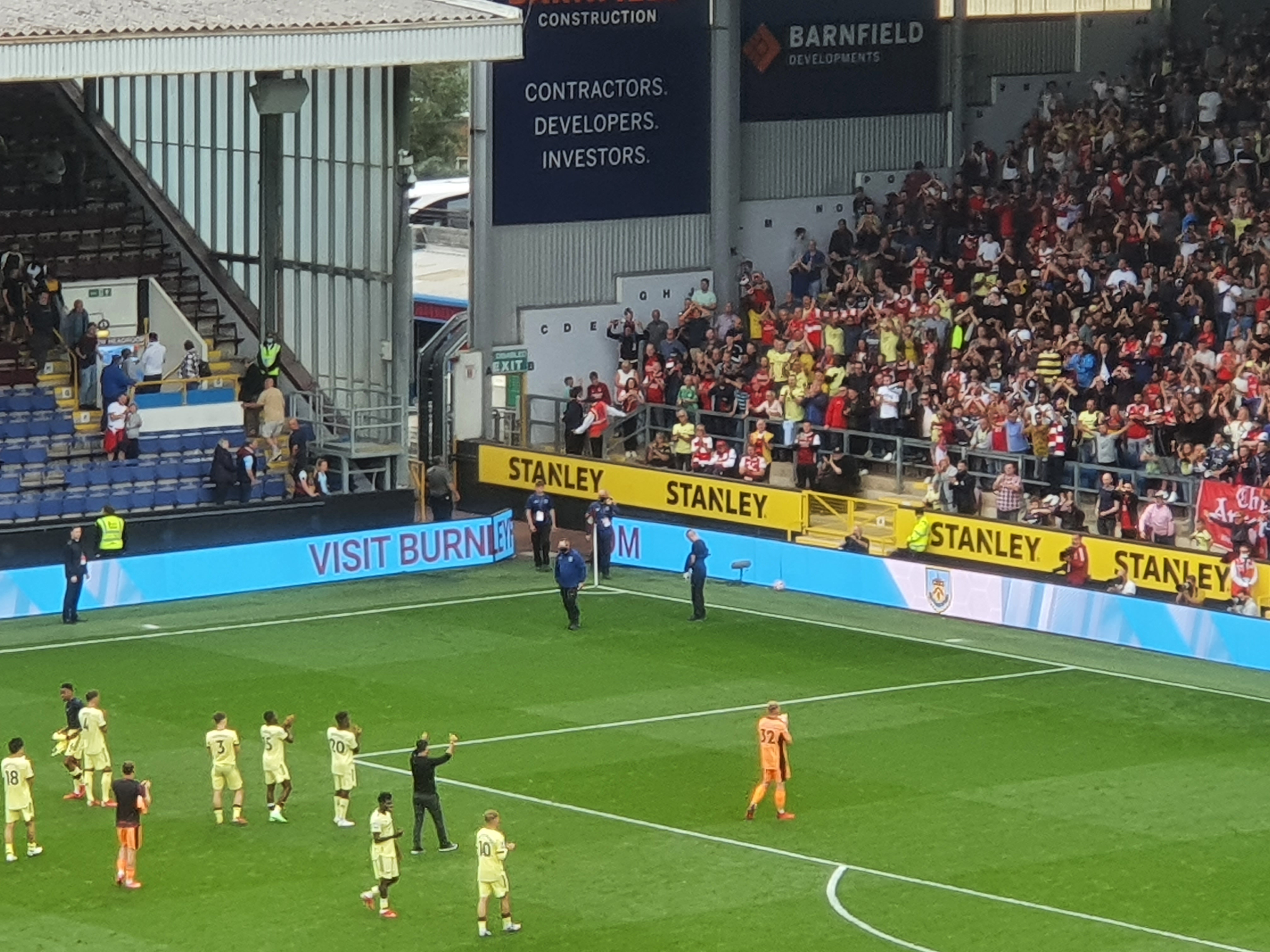 On the 22nd hour of away travel this season for me, a goal. A goal to brighten up one of the dullest, most backward places in England - at the least for the Arsenal fans that had made the trip up.

An early, early start greeted myself, Layth and Harry as we embarked on the test of true football loyalty, Burnley away.

A horrible place to go; the fans, the place, the atmosphere, the football - all of which make this potentially one of the worst away days possible.

Anyway, having miraculously made it to Htchin for 8am, we ill-advisedly embarked on the long journey north. As we neared Burnley, the importance of winning dawned and apprehension understandably followed.

I had an image of Burnley in my mind, completely unfounded, but still an image.

I suppose I could have deduced all I needed to know from the only sign for Burnley being as we turned into the town centre.

What greeted me was a much more emphasised dullness than I could’ve possibly imagined.

An post-industrial town which had ostensibly not become much else over the last 100 years.

Dim red brick buildings and cobbled factories, with the odd modern influence of a lone Aldi or Burger King.

The optimistic directions on a signpost towards ‘Tourist Attractions’ made one chuckle.

The only thing apparent which could be feasibly placed in that category: the visit of whichever team Burnley may be playing that week.

Even the stadium wasn’t full though (in the Burnley end) - surely you start to question as a manager the kind of football your team is playing when even the residents of Burnley have better things to do than watch Charlie Taylor lump it down the line for a hopeful but labouring Chris Wood to chase.

Loyal Gooners in the away end

The away fans, in full voice throughout, turned up to scrap out a victory however possible and clearly this translated to the players - who were visibly buoyed by the excellent support and encouragement from the travelling fans.

The away contingent also commendably drowned out the deplorable yet predictable boos from the Burnley fans - who clearly haven’t politically moved on from the 1920s either.

You never know what Arsenal you’re going to get, especially when travelling to places like Burnley, but today the Arsenal fans were graced with a side that were evidently willing to leave everything out there to come away with the victory.

New signings Tomiyasu and Ramsdale were emboyments of this attitude - flawless displays in what is often considered the most physically taxing game of the season.

Arsenal again started brightly, though again our early efforts came to no avail as a result of a quite often poor final ball. The moment of brilliance from Martin Ødegaard in the 30th minute was exactly what was needed to break the deadlock.

A perfect, curling strike with his often wondrous left foot which (understandably) sent the away section of the ground into complete bedlam. A moment of complete genius from a really talented player, which quite often is a moment of decisiveness in games like these.

Although this proved to be the case, the finish line - for the fans at least - was not in sight until Aaron Ramsdale again commandingly came and claimed the ball from a 91st minute Burnley corner.

The second half was a much more stressful affair than we would’ve hoped, many Arsenal fans optimistically expecting to see their side come out and kick on to a much more comfortable victory.

It didn’t turn out that way though, and Burnley started to overload Arsenal - resulting in an extremely nerve wracking flurry of set pieces and crosses. Nerve wracking not only for fans, but also for Lacazette - perennially warming up - who seemed to notice the shift in control and consequently urged the away fans to get behind their team more.

When Ben White played a hospital pass back to Aaron Ramsdale, who then (appeared to) take down Chris Wood and Anthony Taylor pointed to the spot.

The familiar Arsenal groan returned, a collective one of realisation that we were about to drop points yet again. Being an unwavering pessimist, there was no doubt in my mind as to whether Taylor would give it after the obligatory VAR check - however, Harry was convinced it was not a foul, telling me immediately that he got the ball.

He turned out to be right, Taylor overturned the decision much to the delirious delight of the Arsenal fans, who could again breathe.

Although this celebration was regarded as an invitation to Burnley fans to our left to begin to lob various plastic bottles at us. Lovely.

The penalty overturning was the last meaningful action of the game, although I don’t wish to completely omit the traditional hellish last ten minutes of a game that Arsenal are winning.

This was no different, with multiple moments causing the usual heart palpitations. Thankfully, we held out. The final whistle sounded and the players were greeted with rapturous applause from the Arsenal faithful. The players had battled, the fans had battled and a, more impressive than it looks, 1-0 victory at Turf Moor was the result.

The fans stayed to applaud the players, and were roused by Gabriel, an absolute Colossus on the day, who pumped his fists triumphantly towards the Red Sea. Even Arteta received a warm round of applause.

A massive victory for Arsenal. One that, despite not resulting in a complete click for Arteta’s side, felt like much more of a turning point than the scrappy home win against a really struggling Norwich side.

The victory only marred by the - Burnley instigated - trouble at the end of the game which continued into the Cricket Club (the base for most away fans) after the game, culminating in some amusing Arsenal chants of “Your mother is your sister, your father is your uncle”.

The song sung throughout the game, “Burnley’s a shithole, I want to go home” sums up the day. Home we went, and home with three points. Sp*rs beckons but, in the meantime, what a beautiful symphony the angry murmurs of Sean Dyche and the Burnley fans make.

For further insight, go to Spotify for myself and the fantastic Harry Costa’s podcast. Alternatively follow us @leftonredpod04 for updates on new episodes.