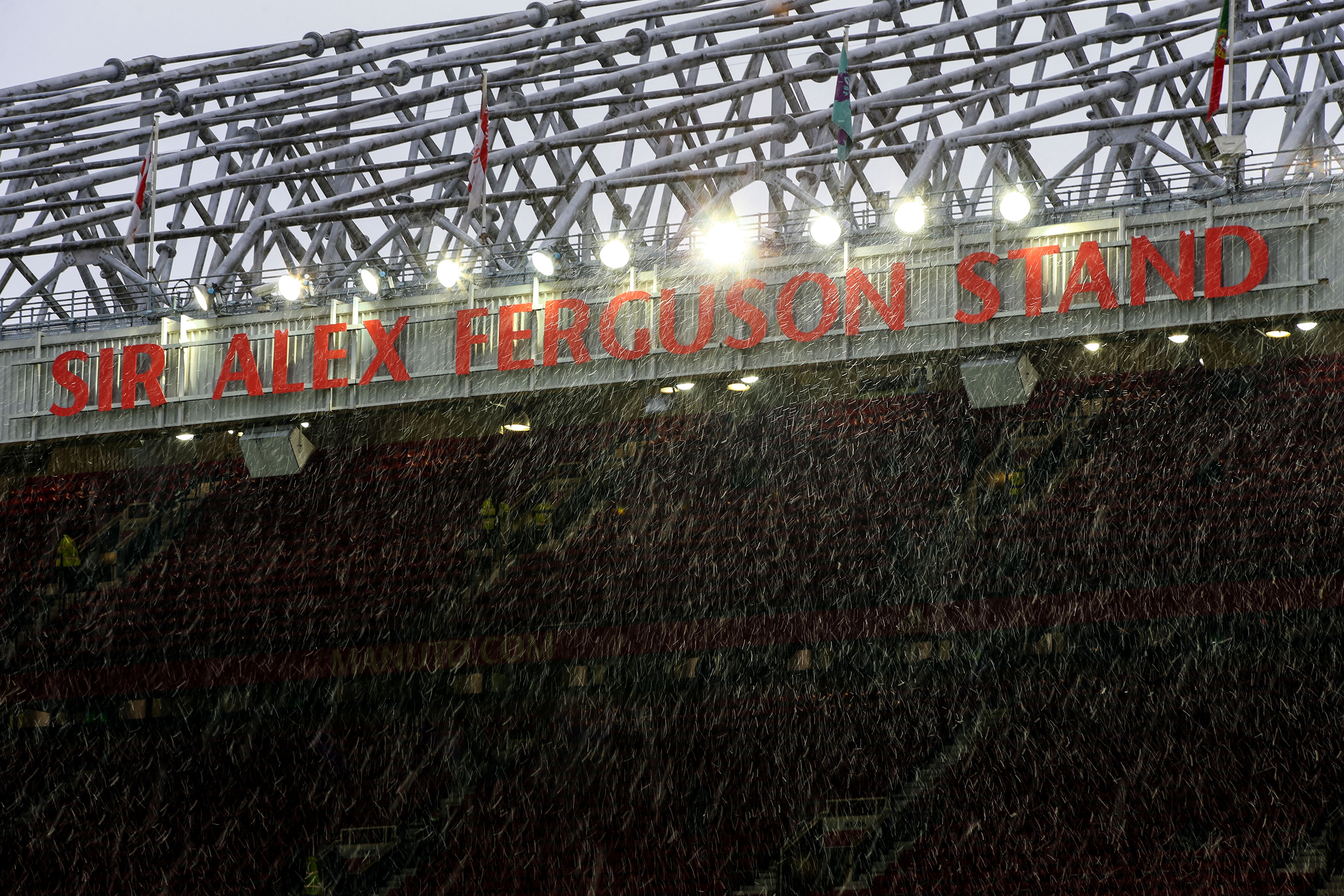 Tis the season to be railroaded into another subscription via Amazon Prime.

Cheers for that Jeff Bezos, just a coincidence I’m sure that Manchester United vs Arsenal if the first fixture that’s gone behind your paywall, purely innocuous innocent coincidence, nothing to see here.

54 seconds in and we're already two corners in our favour, please let’s have an early goal, If there’s any fixture that does get my blood pumping it’s this one.

If it’s possible to see veins popping whilst having your bum parked on a sofa, this is the one, this is the fixture that comes around that I must get to see all 90 minutes of.

I’m liking the way Arteta has set up here, cautiously minded with a stronger midfield, bringing Elneny in to help stop the flow of Uniteds attacking threat.

Martinelli up front to chase down their defenders, it’s a solid start after the opening eight minutes as United register their first shot on our goal which Ramsdale gathers with ease.

This is the game I want us to win more than any other.

Don’t get me wrong, I do love a north London derby win, but there’s history to be made here tonight - our best run of results at Old Trafford if we can nick a decent result here tonight.

In controversial circumstances too, oh happy days, thank goodness for VAR on this occasion, this would probably have led to a sending off for us somehow in seasons gone by - which only adds more fuel onto the fires of passion that fixture creates.

You can’t help but be reminded of fixtures gone past when it comes to this game.

I remember the rainy trip to Old Trafford in the 89 season, when we needed a result, and Tony Adams provided it by scoring at both ends in a 1-1 draw - throwing his head In for a diving header where he had no right to put it.

They were titanic battles around that time. Every one of them potentially edging the see-saw of power either down south, or up north, depending on which way the result swung.

And that’s how it stayed, for over 20 years.

So if it’s a scrappy 1-0 win from a long range strike from ESR whilst de Gea is down injured under a challenge from his own player - then so be it.

I am happy to rejoice in that all day every day.

So far so good. 27 minutes in and we are looking tight and in control and with the first signs of discontent coming down from the stands from the United fans.

The travelling Arsenal support are in good voice, and so they should be, it’s the champions section of the ground.

How many teams are fortunate enough to be able to say that? This fixture reminds me of the Overmars winner from an Anelka flick on in March 1998, that silenced the ground that day. The bulging eyes of that fella in the black jacket at the final whistle made a not to be forgotten appearance on our TV screens as a title edged inevitably closer to heading down south that year.

These are the fine margins that can cause a serious dent in an opponents hopes and dreams.

I wasn’t present at that fixture, nor the day we won the title at Old Trafford, what a fixture that must have been to be able to say I was there that night.

I was watching that night in a boozer in North London, not too far from Highbury. I was extremely comfortable in my belief that we would get the necessary result that night, whilst most around me were biting their nails.

I never truly felt under any threat from United that night, destiny would play it’s hand and we would close in on a double.

37 minutes into this fixture and I’m feeling equally comfortable, happier with a second goal maybe yes, but so far so good.

The boys are in good voice and the team looks set up to be in good knick for the second half.

Just keep it sensible now, nothing too silly, don’t over commit and keep it tight at the back.

If you want to put a marker down, where better to do it than Old Trafford. 40 minutes in and I’m screaming for Odegaard to be let loose on this free kick, just outside the six yard box - shades of Burnley from earlier in the season. But it’s Partey who steps up and slams it into the wall on this occasion.

Fast forward a couple of minutes and within the blink of an eye Fernandes pulls them level, not the best time to be conceding a goal either.

Fine margins between these two clubs, a moment of brilliance or a shady decision here and there being the difference.

I’m happy with that first half, would be happier if it were 2-0 to us. We didn’t look to be under any threat there and here we are heading into the tunnel at one apiece.

Should make for an interesting team talk at half time, whilst you have to respect them somewhat, that first half performance tells me we don’t fear them - nor should we.

We shouldn’t be selling our best players to them either, as in like never, I’m still only recovering from Viv Anderson making the journey up the motorway let alone Alexis or Van Persia’s frankly quite shocking transfer requests.

I’m not sure how you can pull on their jersey having pulled on ours, such is the history imbedded in this fixture. Only the footballers concerned can offer that explanation. I’m definitely more in line with a teenage Cesc Fabregas hurling a pizza at Sir Alex Ferguson’s bonce than I am interested in swapping shirts at half time - and this is the game that brings that side of me out.

Whilst I’m probably a bit too old to be sliding around on my knees for clicks and views on YouTube, I’m not too old to get fired up when we deliver a psychological blow to our Premier League rivals from Manchester.

Second half coming up and I’m desiring a winner. A draw would be a good result, but why not go and capitalise and have the belief that we can and should be winning at Old Trafford?

This is not the greatest of United teams by any stretch of the imagination, they are there for the taking and we should have nothing to fear, silence the crowd down, keeps the ball moving and open them up.

The teams come back out and play resumes, come on Arsenal, please let’s get on top and deliver a crushing blow in this half, worrying signs at the start as a few shots come raining in on our goal, need to keep this crowd quiet, don’t let them get riled up, only one way to do that, possession possession awwwww b*ll*x !!

Ronaldo makes it 2-1. Gonna have to show some character here now, 54 minutes in and Odegaard provides it, the champions section is going nuts, you love to see it.

Just what we needed there, massive goal to score, should do his confidence the world of good too, only the Arsenal fans can be heard now, what amazing support we have on the road, incredibly loyal incredibly loud, it’s a damn shame that everyone is not able to witness this on the Beeb.

This is exactly what I want to be seeing, controlled precise passing, with United struggling to get hold of the ball, Arsenal throw in  and another chance to use up some time, and eat into their confidence just a little bit at a time.

You can almost smell the confidence evaporating from the stands as 65 minutes ticks by. ESR is looking extremely comfortable on the ball and the whole team is playing well, Martinelli is prepared to go deep if needed and Ramsdale is holding onto everything.

Miracles will occur. We have got away with a penalty shout at Old Trafford, hold up no we haven’t here we go,

VAR Bites us in the rear, as if this ground needs the added of benefit of a second look, come on Ramsdale make the save, but it’s not to be as Ronaldo drills his penalty straight down the middle - and without even playing well Ronaldo nabs his second.

It was nice for the briefest of moments to see a ref not instantly give a penalty at Old Trafford, the timing for that goal could not have come at a worse time for Arsenal.

Once again this crowd needs to be shut down, it’s not an environment for shrinking violets, this is a time to step up, take a deep breath and deliver the goods.

73 mins in and there’s another opportunity for us to pull level, Odegaard throws in a menacing cross from a free kick that leads to another corner, we have to make it count boys getting another equaliser here is the least this performance deserves, Martineli breaks away and should have got it back from Aubamayang.

I’m expecting an avalanche of derision to come Odegaards way from the Arsenal community online, for the tackle that led to the penalty - but he had a good game to my mind, the law of averages says you are going to get penalised as least once in the age of VAR at Old Trafford.

Once again we are camped in their half, just need a stroke of luck, a bobble, a deflection anything that will get us back too 3-3.

Time is running out and the chances are getting ever further away, the clock is ticking down and we are past the 90 minute mark, it’s fair to say I’m not expecting an extra eight minutes of Fergie time tonight.

It’s gonna take something special to get a result here now. Overall I think it’s been a valiant performance, very hard done by if we are on the receiving end of a defeat here, but that’s how it looks like it’s going to stay, it doesn’t feel like United have played very well and their fans might well want to keep hold of the ball as the clock ticks down to defeat.

I feel there are positives to be drawn from tonight’s game, we had a lot of possession and looked like we carried some threat going forwards.

It just wasn’t meant to be, we lick our wounds, and we move forward.

I spare a thought for those of you who travelled up to see this game - you more than most didn’t deserve that sloppy penalty we gave away that proved to be the difference between a valuable draw and a frustrating defeat.

Safe travels home, hope the roads are clear, and try not to be too despondent, on another night that’s a comfortable win.