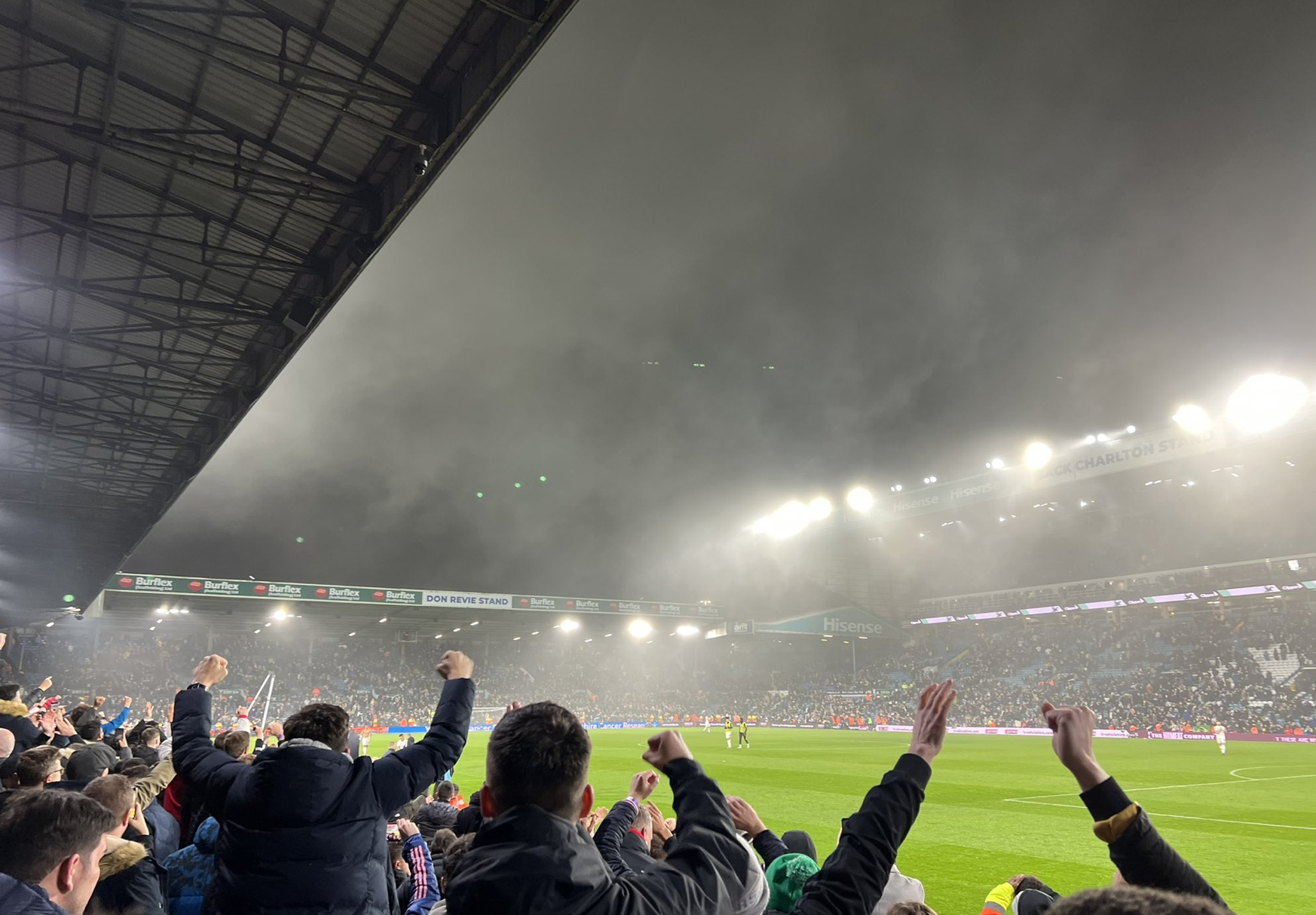 Arsenal supporters' view from the away end at Elland Road

I’m back, and what a game to be back for.

Despite being in the Leeds end, being back in a crowd was comforting (even if it was behind enemy lines due to away end ticket struggles) and to see that kind of a performance was an absolute blessing.

We play really good football. We have really good players. Might I add too, we have a very good manager.

The journey was a weird one.

Of course we got to Hitchin to meet with Layth, but on arrival, news of Aston Villa’s postponement (just two hours before their kick off) hit.

We set off nonetheless, but the drive was burdened with constant worries about the game going ahead.

These worries weren’t helped by people taking the p*ss tweeting things like “Martinelli has tested positive… for being the best youngster in the league” which obviously resulted in multiple instances of heart sinking - however it is a statement which is quickly gathering more evidence.

I had 14:30 on the postponement bingo, but as we arrived in Leeds at around 16:30 we started to believe that the game might actually go ahead.

Layth both nearly got a ticket and broke his car as we were saved from both by a very nice local who said he’d let us park in his bay because his boy supported Arsenal - rather than Layth essentially driving off a one floor building to get back off a patch off grass he’d somehow found his way up to.

I still had to push the car back up this jump so the gear box wasn’t crushed though!

We looked at the line ups on the walk to the ground. Unsurprisingly Mikel left the lineup unchanged, although Sambi Lokonga was absent from the bench after a positive test result (hopefully not the first of many). Leeds’ lineup was weakened as expected. It wasn’t that bad though, still starting with many players who had played first team football for Leeds before.

The bench was a different story, unbelievably featuring a player who had turned 15 (!) earlier THIS YEAR!

For all the talk of them having to play their kids though, the average age of their starting 11 was 25y 251 days whereas Arsenal’s was 24y 250 days.

You don’t see us complaining, to be fair though why would we!

Me and my friend (Lachlan in case he is mentioned again) were mostly concerned with trying to blend in with the home fans, convinced we would be castrated if our Gooner nature was uncovered.

Lachlan wore a flat cap and told me that it would make him look more Northern, all I did was cover up my cannon tattoo which was probably for the best.

Our attempts to blend in were limited though as we had to ask about six stewards where our seats were, despite having actual season ticket cards. Anyway, we got in. Not without a final ticket scare as I couldn’t figure out how to use the scanner at the turnstile.

What a stadium Elland Road is.

My favourite that I’ve been to this season I’d say, maybe on a par with Old Trafford.

It’s a proper ‘old school’ ground and a constant cauldron of noise. Our seats were fantastic, four rows behind the Leeds dug out - handy to see the Bielsa meltdown first hand.

‘Marching on Together’ belting out around the ground was special, more so than YNWA at Anfield, and of course to blend in I had to sing my heart out too. A great song, sung by amazingly passionate fans - the likes of which I haven’t really seen before.

I found it immediately hard to sit on my hands as the game kicked off, muscle memory telling me to join in with the chorus of the Saka and ESR chant.

I managed to keep quiet, but quickly realised that I wouldn’t survive just sitting silently, resorting to head shaking and swearing about how easy it was for Arsenal to get through (which it was) rather than skating Lacazette for missing a chance of that magnitude so early on. Given the result, I may just about be able to forgive him now.

The first half was delightful to watch. We were absolutely fantastic. Our front four were again unstoppable, ripping through Leeds’ midfield and back four at every given opportunity.

It was actually a surprise that the breakthrough came as late as the 16th minute. Lacazette did well to pick out Xhaka, who got into a tangle and hit the floor. Amid the calls for the penalty, Laca did brilliantly to pinch the ball from Forshaw which found its way to Martinelli, who again unerringly bent the ball into the back of the net.

The kid is on fire, and reminding me very pleasingly of some of the most talented Arsenal players ever - Henry and Alexis in particular spring to mind. In the 28th minute the kid on fire burnt through again.

Xhaka played a great ball through to Gabi, who showed great pace and physicality to fight off the efforts of the struggling Leeds defenders before dinking the ball over the onrushing Meslier.

I again would like to apologise, this time for questioning the strange man sitting behind us at the Palace game (if anyone remembers) for shouting that the game was “crying out for Martinelli”, every game would be the form he is in right now. 2-0, and it should’ve been five by that point though.

In the 42nd minute we made it three. Ø flicked a fantastic ball into the path of Saka who drove forward. He lost it for a second, but fought to win it back and deserved the deflection on his shot to take it past Meslier.

He was fantastic all half. I shook my head, turned to Lachlan and shouted “this isn’t good enough!” with creepily angry glee in my eyes. What a half, and I was envious of the jubilant away end. 11 shots on target, the most any away team has had in the first half since Premier League records began.

The only mark on an otherwise flawless first half was the racist abuse which Rob Holding was forced to report to the Fourth Official half way through the first half. It’s crazy that this is still happening, but thankfully an arrest has now been made. All the more reason for the players to continue to take the knee.

I made a tactical change at HT. Whilst on my phone, it struck me that my lock screen was very noticeably a photo of ESR and Saka, which was visible to the hostile pair of fans behind.

I found a picture of my dog and made him my lock screen although I’m fairly sure the pair behind saw as they more aggressively hurled Southern abuse in the second half.

That abuse was paired with some very dirty looks on the way out, but maybe they were just unhappy with the result and really hated Southerners anyway!

The second half was not as comfortable as we may have hoped. Leeds came back into it to an extent, with the Gunners noticably missing Tomiyasu who came off with a muscular strain. Cedric was often caught out of position and Leeds managed to fashion more openings than they did in the first, that’s not really saying much though.

A stupid tackle from Ben White gifted them a way back into the game. I celebrated like mad when it went in, but was shivering from the nerves and fear that were reinstalled in me after that goal. I thought we’d throw it away. Capitulate again.

On came ESR though, and what a weapon to bring off the bench. He brought control back, and Leeds’ confidence quickly evaporated. Three minutes earlier than against West Ham, he then again wrapped up the game. A fantastic pass from Ø, dare I say Ö esque, and Smith Rowe vollied home to make it 4-1.

I very nearly celebrated this one. My head shaking was even more vigorous, to the point where Lachlan actually looked worried about me.

Impressively on the FT whistle Elland Road erupted into chants of “We all love Leeds” as the players walked off to rapturous applause from the majority of the home fans who admirably stuck it out in the cold.

A wonderful performance, however terrible Leeds are right now. We are playing with supreme confidence, and have added a very pleasing entertainment factor to our game since that loss at Goodison Park.

No sitting off when we take the lead anymore. We looked like we smelt blood every time we got the ball, and 9 goals and points in eight days is no less than we deserve.

We’ve got some really special players on our hands. Martinelli looks the business, Saka starting to shake off his Euro woes, and Smith Rowe and Ø are providing Mikel Arteta with the best kind of problems a manager could ask for.

You know it’s going well when you’re 21 year old number 10 has scored the same number of league goals as Ronaldo.

The team is really coming together, and I think the entertainment factor aforementioned has everyone even more on board now than they were during the 10 game unbeaten run.

Three tests post Everton all passed with flying colours, and two more pre City that need to be passed too.

Who stops us if we carry on playing the way we’re playing? Sorry Mikel blah blah blah.

Norwich await, until then Gunners.