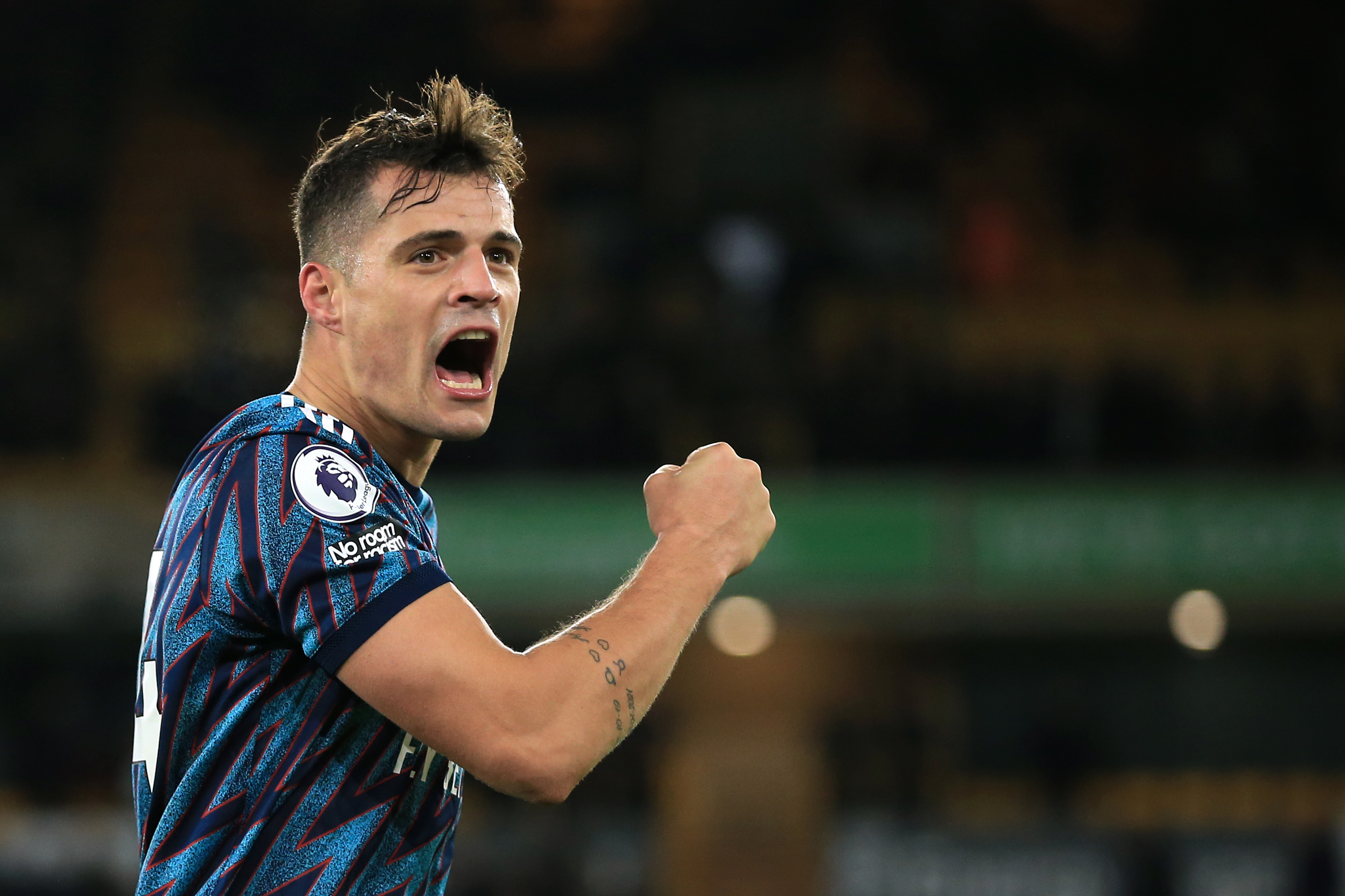 Just why are Wolves so annoyed at Arsenal celebrations? Read on for more. PICTURE: Granit Xhaka celebrates at Molinuex after the Gunners hard-fought victory two weeks ago. CREDIT: Offside

I've always liked Wolves... in that way that you 'like' teams who are never going to be a big threat to your own. Until now.

I still can’t see Wolves finishing above us, let alone depriving us of a Champions League place by finishing fourth. Seventh, maybe - but they'd be welcome to take our place in the the Europa Conference Losers-And-Tottenham League (sponsored by Poundshop). So what's their problem?

It's a shame to have to add them to the list of ars*h*les we want to beat because of something they said or did.

In this case that b*ll*cks about celebrating "as if we'd won the league" after beating them with ten men in their own backyard. Must have really hurt them.

Which makes it all the more reason, as Layth says, to get in their faces when we play them off the park* in the return fixture.

Celebrating goals, and celebrating victories, is the whole f*cking point of football.

It’s why we go to watch it. It’s why strikers get paid the biggest money. And when you haven’t scored a goal for six weeks, you’re bound to go a bit mad.

Sadly that’s something FIFA and UEFA and those joyless c*nts at PGMOL - yes, you, Mike Riley - seem determined to stamp out. If they had their way they’d chuck us out for standing up, or cheering, or raising our arms to celebrate.

As for the players, imagine being paid several million pounds a year to score goals and not being allowed to celebrate when you do. It's already hard enough for them when they're not allowed to rip their shirt off to reveal a photo of their new-born baby, or their team-mate whose auntie died, or a slogan in support of the separatist movement in Nagorno-Karabakh, without getting a yellow card.

And you definitely can't jump into the crowd and celebrate with the fans. Not unless you're that diving little shit Bernardo Silva.

If only Michael Oliver had been in charge that day, rather than his idiot friend Stuart Atwell with his blindfold and his finger on the VAR button, to flourish a double-yellow at the cheating shortarse. (Silva, not Atwell. Although... ).

Remember the days when Auba, at Dortmund, used to whip a Spiderman mask out of his sock to celebrate a goal and put it on in front of the fans.

Perhaps there's still a mask in his sock, along with an energy bar, a couple of phone numbers and an entire flock of moths, waiting to be released one day when... if... he ever gets another goal.

God knows he could have carried on playing last night for several more hours without the Napoli goalkeeper needing to look up from watching the Gomorrah box set on his phone. But that's another story.