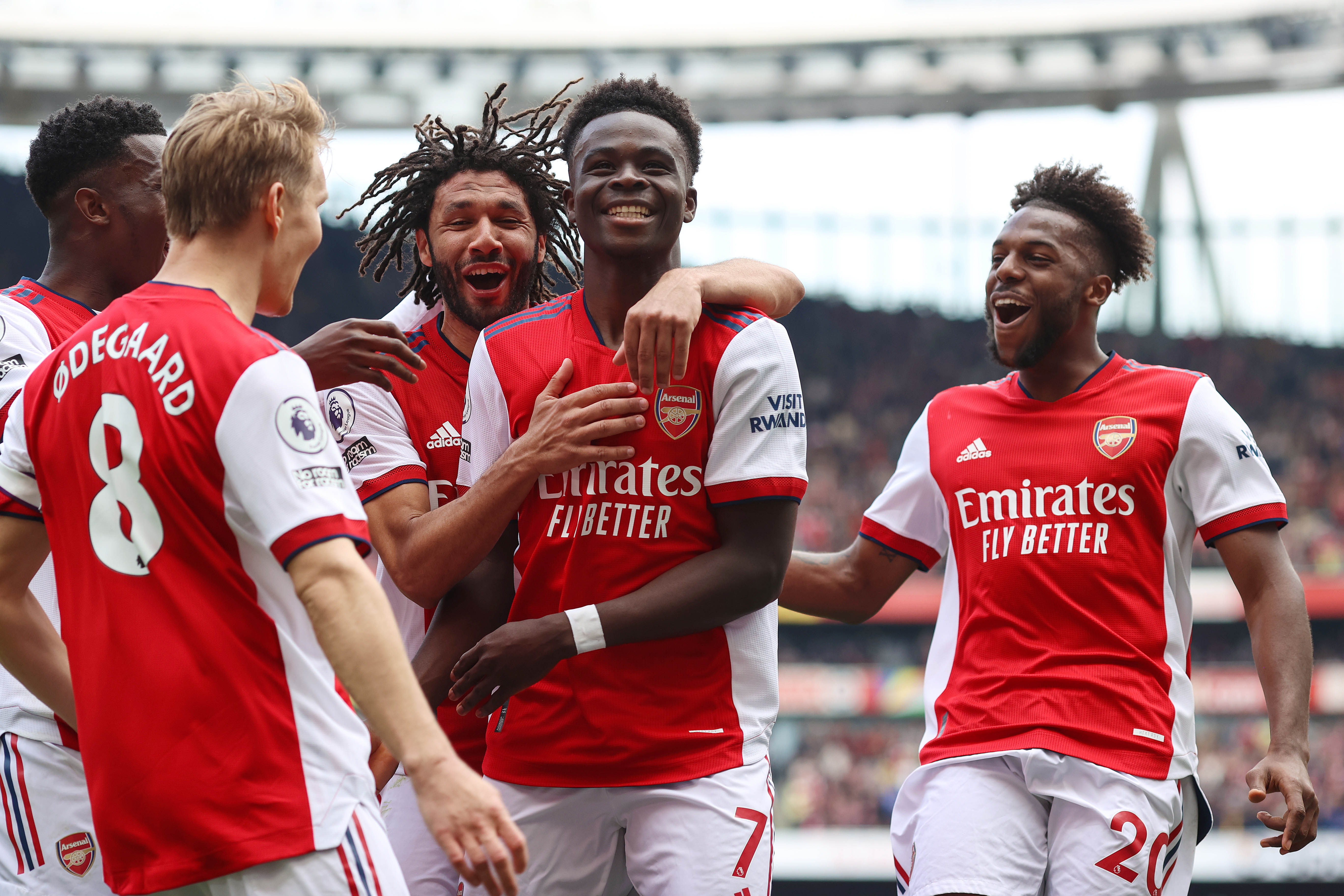 We love you Arsenal, we do

Get in. Four days, seven goals, and six points.

Lose to Palace, Brighton and Southampton and score one, and then for inexplicable reasons beat Chelsea away and United and score seven.

Weird team. Classic Arsenal, but would we have it any other way?

Well ideally we run away with the league but this is also quite fun. The hope that I said was gone, that’s back.

Five games to go and we’re still hopeful, and still care - that’s all we could’ve asked for this year. Mikel Arteta really has stopped the rot, albeit in two of the weirdest games I’ve ever watched. Spurs too!!! We are now 4th again…

The magnitude of the game was tangible.

With 30 minutes until kick off, there was a slight hush around the Emirates. The 1230pm kick off played a part, but nerves almost certainly had their say too.

The atmosphere started to pick up while walking around the ground to be fair, and the Ashburton Army were in full voice, with the wonderful tifo display already up too.

I have to say that block 25 in the North Bank has been a breath of fresh air this year, and has undoubtedly played a huge role in the ever improving atmosphere at the Emirates this year. It’s done the team the world of good, and you can see how much it means to them and Mikel.

We started the game fantastically. Swarming all over them, and forcing more errors on an error ridden side. Telles missed a cross from Xhaka, which Saka picked up and looked to curl into the corner. De Gea made a fantastic save, only for Tavares to follow in and put the Gunners ahead after three minutes.

The start of what we all hoped to be a beautiful redemption arc (which he didn’t quite manage to match the trajectory of during the game). Wild celebrations, but the game didn’t continue as we may have hoped.

Man United gained control, and began to look threatening. The nerves got the better of the players, and the defence in particular. Man Utd didn’t really press, but Arsenal’s makeshift back five panicked and flapped. Ramsdale played us into trouble a few times, whilst Cedric also hacked at a couple of clearances and lost the ball a few times in a disastrous period for him (which did come later in the half).

Arsenal weathered the somewhat feeble storm, and doubled their lead with 15 minutes to go until HT.

We thought we’d done so through Nketiah after the ball fell kindly to him as Saka was bundled over, only for that to be ruled out for offside. Jared Gillet (who had a chaotic day on VAR duty) then decided that Saka was fouled by Telles before the ball came to Nketiah.

Saka grabbed the ball with confidence again, and dispatched again. 2-0 now, and Bukayo Saka has put his penalty woes well and truly behind him. The relief of two goal daylight didn’t last very long, with some typically (of our post international break defence) calamitous defending Ronaldo fired United right back into the game.

Nuno was being an idiot with Gabriel at the back post, and Ramsdale was being an idiot half way between coming out and staying on his line. 2-1 reflected the game a lot more accurately than 2-0 did, United were causing us real problems - or rather we were inviting United to cause us problems (when I say we, in the last 10 of that first half, it was mostly just Cedric welcoming United attacks and corners.

HT, 2-1 and it was all very stressful. I took myself off for some water.

The second half started off really in the same vein. We didn’t really come at them, and they managed to regain control of the game fairly quickly - signified by Rob Holding’s looming presence as he was sent out to warm up with just 3 minutes of the second half played.

Cedric picked up, but it was Nuno who was causing most of our problems in the second half (any hopes of a redemption arc were fleeting).

As a corner was swung in by Fernandes, that man Nuno found his arm in an inexcusably unnatural position and the referee didn’t hesitate in pointing to the spot. I was almost certain it would be 2-2, but Fernandes (weirdly not Ronaldo) hopped, skipped and jumped, sent Ramsdale the wrong way and carefully picked his spot perfectly onto the outside of the post. Phew. Ramsdale and Ø made sure he didn’t forget that in a hurry too, taking some pages out of the well read books of Keown and Winterburn.

The miss didn’t really give us the kick up the arse that we needed though. Two minutes later Ronaldo swept home, only for the assistant to raise his flag seconds after. A lengthy VAR check, but the goal was ruled out.

At this point, it looked like it was going to take a miracle for Arsenal to win this game. The crowd’s frustration was more audible than ever, and Arteta resorted to geeing up the crowd himself as he turned to the West Stand to ask for their support.

Dalot then had his striker brilliantly turned onto the post by Ramsdale, and Arteta had seen enough. Martinelli came on for Smith Rowe, who despite working hard was somewhat invisible.

The tide started to turn after Gabi came on. He provided more energy and industry on the left-hand side whilst also covering Nuno more effectively. The killer came with 20 minutes to go. Saka’s cross was blocked after some probing, but Elneny pounced on the loose ball before Xhaka unleashed a pile driver.

The net rippled, and the roof came down at the Emirates. My celebration was delayed, as I saw the dreaded finger go to his ear for yet another VAR check.

This game, if no other, really shows how much VAR needs to be sorted, it so often takes the joy out of such momentous goals because of random checks bringing their legitimacy into question. It’s madness!

Anyway, Xhaka has been fantastic this season, and that goal is the perfect summary of the season he is having. What an amazing story.

He blew kisses to the Emirates crowd, who I’m sure would have all blown them back. A moment Arteta confessed he, and Xhaka, have “dreamed of. He deserves it.

We then took back control of the game, and Holding’s substitution pretty much spelt the end for Man Utd. The dreaded 5-4-1. No one wants to face that. It’s indestructible.

I wasn’t a fan of the premature Oles and my nerves were still jangling, but in all honesty the game finished when Xhaka smacked that in.

What a result. Not a fantastic performance, but the result means all the same. Back in 4th, and there for at least another week. What’s not to love? If we’d have just won one of those three games we lost, we would’ve been third!

Mikel has found a solution to our injury problems, and just in time. We’re right back in the race, and probably back into pole position after Spurs slipped up again. With Tomiyasu making a cameo, and Eddie and Elneny performing again, things are looking up again.

Hope is back, and to an extent expectations are too.

Arsenal go to West Ham next week, in between the two biggest games in their history.

Now then, it really is back on… Until then, Gunners.