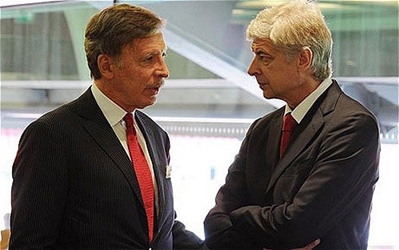 They say the pen is mightier than the sword, so - as much as it would delight me to take a metaphorical sword to some of the current Arsenal squad - I prefer to pen these thoughts instead.

A brief background: I am an Arsenal fan of over 30 years. I grew up in Islington as a young lad and Arsenal is a lifelong commitment for me. When I started supporting Arsenal, glory never came into it because, back in those days, that usually belonged to Liverpool. Nevertheless, I developed an inexorable bond with Arsenal FC and it is one that will remain with me for as long as I live. The players that were typically regarded as not good enough from Morrow to John Jensen to Lee Chapman and Selley etc were still players I gave my absolute backing to.

I read an excellent Arsenal blog the other day (Arsenal Truth, if you ask) and the author made a salient point: the one thing I have always traditionally had as an Arsenal fan, is hope. No matter what team was out there, there was always the hope that Arsenal’s immaculate pride and team spirit would overcome superior adversaries. This led to moments like the European triumph over Parma, or Anfield 1989.

However, my relationship with Arsenal has now changed and I am unsure as to whether it can recover in the short term. Arsenal were playing a Champions League match the other night and what did I spend the 90 minutes doing? Watching a BBC iPlayer repeat of ‘The Thick of It’, and then the second half of the Dortmund game. I found out the Arsenal score on my phone. It is not about whether we win or not – I care about a team that competes and a team that cares enough to compete, above the primacy of a balance sheet.

The situation at contemporary Arsenal is well known and for me there are two clear problems here: the first is the manager, Arsène Wenger, who has to go. The second is the fans. Allow me to elaborate.

On Wenger what more needs to be said that hasn’t already been done to the death? Seven years of no trophies. A man who complains about over-inflated wages in football but has contentedly amassed over £49 million in salary over the past seven years, despite having won nothing. Tactically deficient. Full of excuses, and an inability to motivate. An outrageous wage-bill that has constrained the club and a farcical incompetence in the transfer market that has seen over £35 million spent on Gervinho/Giroud/Santos, when the club refused to pay £20 million for Juan Mata. The most unforgivable thing Wenger has done in my eyes however, is to polarise the Arsenal support to the extent that the Emirates has become the home of civil warfare.

I am not forgetting the role of the Arsenal board in all this of course. The elusive dishonesty of Ivan Gazidis, a man who was ‘rewarded’ with a £2.3 million bonus despite sustaining an operating loss, the man whose appointment was ratified by Wenger himself, making a farce of his position as ‘CEO’. Mr ‘Self-sustainability’ who talks about ‘oil money’ but fails to explain what oil money has to do with losing cup finals to Championship Birmingham and being humiliated by Norwich, Man United and Schalke.

There is no need for the very last remaining Wenger apologists to even ask who Wenger could be replaced with because you take one glance at Jurgen Klopp managing Dortmund, a team with a wage-bill over 40% lower than Arsenal’s and match-revenue that is a fraction of Arsenal’s – and you see a young ambitious manager beating Real Madrid in Europe, embarrassing Citeh in Europe and dismantling the mighty Bayern Munich year after year domestically.

The culture at Arsenal has become diabolical. I detest seeing players laughing and joking after a defeat. I abhor any club that justifies 14-minute flights to Norwich to spend 90 minutes wondering what they will write on Twitter when they get home. I deplore overweight ‘defenders’ swapping shirts at half-time. The culture of rewarding mediocrity stems right from the top and starts with Arsène Wenger; a man who has continued to be rewarded for mediocre management. Right through to the comical decisions to continue to blow millions of pounds offering new contracts to Rosicky, Diaby, Ramsey, etc.

We are often told by Wenger and Gazidis that we ‘cannot compete’ with oil money (despite the fact Newcastle finished ahead of Chelski last season, but I digress). One thing that money does not address, however, is players with heart, pride and commitment. Say what you like about the moral bankruptcy of Chelski, Citeh et al but I absolutely guarantee you that the likes of Vincent Kompany, Sergio Agüero, Didier Drogba, Edin Dzeko, Juan Mata, Ashley Cole and friends are winners. Irrespective of the shirt they represent, you are guaranteed nothing but pure heart and commitment to add to their technical skill.

Yet Arsenal fans dare to decry such teams as ‘mercenaries’. Wrong.

The real mercenaries are the likes of Marouane Chamakh, who has made it plain he would prefer to watch from the stands and pick up £60k a week despite being offered playing time at Bordeaux. Bogarde anyone? Sebastien Squillaci is another. Neves Denilson is another who could have just torn it up and left but likes the money too much. Oh, is that Johan Djourou I hear? How long was Almunia stuck on £60k a week? Why is Fabianski still around? People often hold Arsenal up as a model of financial virtue but the scandalous decisions being made throughout are shocking.

The final point, and one some might find controversial, is that I feel Arsenal fans have a huge degree of responsibility to bear in the obvious demise of a once-proud club. Arsenal has become the club of ‘can’t’. We ‘can’t compete’ with Chelsea/Man United/Norwich. We ‘can’t’ spend since we are waiting for the magical shining knight FFP. Because FFP will, of course, teach the likes of Giroud to run faster and become a clinical finisher.

This culture of ‘can’t’ has spread to the fans. ‘We can’t do anything to change things, so better to just accept things the way they are and carry on paying our hard-earned’. No. This will no longer do. There is a fine line between blind loyalty and deception, and believe me many fans have crossed over.

The reason Kroenke, Gazidis, Hill-Wood and Wenger have become so arrogant, so flippant in their dismissal of fans is down to the absolute lack of pressure they are facing. They do not fear consequences, and rightly so. Arsenal fans have been compliant for far too long. I hear many of my Arsenal friends complaining about the lack of atmosphere at the Emirates but then again, what did they expect? The long-standing Arsenal fans of years such as myself have all become indifferent to what the club has become. Wenger and Gazidis would hate nothing more than to have fans such as myself in the ground who will absolutely not tolerate mediocrity and a culture of excuses. Questions would be asked. So instead, they have turned to the more bland, unquestioning invertebrate mollusc to attend Arsenal matches.

This is not to say that all people in the Emirates are – however I found Wenger’s comments after our pre-season tour of Asia rather indicative: ‘We would love to fly these fans in to London if we could, they are tremendous’. Indeed. I somehow doubt that the average Malaysian Arsenal fan who has been unflinching in his support since 2004 is going to be posing the same questions as a fan of 30 years. Do you?

Arsène Wenger is now, to my mind, indistinguishable from any other average Premier League manager. There is nothing Wenger does that David Moyes cannot do (Moyes is an excellent manager). Given the same resources as Wenger and half the salary, Brendan Rodgers could probably get Arsenal into fourth (‘in crisis’ Liverpool are just three points off Arsenal as we speak). Wenger is not ‘over-achieving’. The fact that he manages fourth with shambolic players such as Gervinho and Mannone is nothing to do with over-achievement, and everything to do with the profligacy of Wenger’s spending in the transfer market. He needs to go and should have been gone long ago. Fourth is not a trophy. It’s not an achievement and no amount of spin will ever convince me that it is anything but mediocre.

Arsenal fans can do something about this and it does not even involve protests. If Liverpool fans were able to chase a whole board out of their club, and if other clubs are able to change managers and continue their success, there is no justification for Wenger to remain at this club. A financial boycott is the only language that Wenger and Gazidis will understand and, trust me, Stan Kroenke will awake from his indifferent slumber when he sees the next balance sheet and sees match-day revenue and sponsorship plummeting.

Arsenal is a huge club and it’s about time people realised that. The club pre-dates Wenger. Instead of asking what Arsenal would be without Wenger, it is high time people asked what Wenger would be without Arsenal. No other club of stature would have indulged him for so long with no tangible results. It’s pointless hearing the defunct excuses for Wenger anymore because they’re laughable: ‘If Arsène leaves, then so will all our stars’. Perhaps this is taken to mean that we will be rid of dross like Fabregas, RvP, Nasri, Cole and retain the likes of Gervinho, Giroud, Djourou and Fabianski eh?

‘Who would you replace him with?’ A breathtakingly imbecilic argument, seeing that Wenger was an unknown quantity when he joined Arsenal and that plenty of unknown quantities are out there waiting to be given a chance. Sure, it could go wrong, but taking a risk is better than accepting mediocrity. If Chelski FC refused to accept second place under Ancelotti, there is absolutely no justification for Arsenal to accept fourth under Wenger. Not when you see Di Matteo win the CL (a trophy Wenger will never win), an FA Cup and competing at the top of the league.