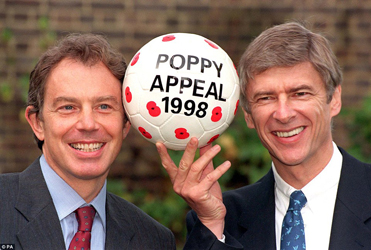 Has Arsene become the Tony Blair of football?

(Ed’s note, the original title of this piece had the letters ‘eng’ in the word Wenger replaced with three asterisks. Running a piece with that title is a step too far for the Gooner, although we do acknowledge that it reflects the level of animosity that has unfortunately built up amongst a section of the Arsenal fanbase. Right or wrong, it is a reality that some feel genuine hatred towards the manager as an individual.)

Rant alert! I don’t go to games anymore. Part of it is financial and part of it is my rage regarding the current regime.

I find it interesting, from an anthropological point of view, to see this AWFC saga play out (when I disengage from my personal frustration with the current state of affairs). I think it’s incredible that pro and anti-Wengerites are actually having punch-ups. Isn’t this reality alone enough for him to realise that the writing is on the wall?

He is tearing this once magnificent club apart.

Yes, the board are hapless and I wish they would sod off, too. But AW is one of them. He fronts every move they make, from ticket prices to transfer activity (why oh why didn’t he sign Kante when he had two bites of the cherry? Smartarsene). Apparently, it’s even his voice on the club’s phone line.

Anyway, I get the feeling he thinks we are all mugs, with some of the guff he comes out with. Like the “spireet”, the “solidarity” and “mental strength” of his team.

Who do you think you are kidding, Mr Wenger?

We’re bottlers (there was a time when I thought that would never be said about an Arsenal team) and have been for years. We are also now the laughing stock of European football thanks to the 10-2 aggregate mauling by Bayern Munich… to add to the other 5-1 against them in 2015… the 8-2, the 6-0… I could go on but frankly, I’m trying to forget about the numerous humiliations.

This has all been said, I know.

My essential point is that I don’t understand why AW still garners so much respect, most obviously from the AKBs. As a mixed race Brixton boy, I’m with (AFTV’s) Troopz on this: F*** him. I refer to him as “W***er” because that’s what I think of him these days. Just being real. I think there’s a particularly English thing going on with how much reverence he’s been afforded, even among most of the WOBs who want him gone…

Stiff upper lips and all that [repression].

Where was he when, as a seven year old, I first stood on the terraces at Highbury on November 2, 1979 when we beat Brighton 3-0? Arsenal will always be more mine than his.

Nowhere in the world would fans of a club with such a rich history as ours have tolerated an old fraud making such a pig’s ear of things for so long. Think Barcelona, think Real Madrid, think Juventus, think Man United, think Boca Juniors, think Nagoya Grampus Eight. Okay, that last one is a joke. Now the joke’s on us.

He treats ‘his’ fans, all Gooners, with contempt. Obviously WOBs and - probably even more so - AKBs. Lose 10-2 and blame the ref! Yes, he thinks you are mugs, AKBs.

Modern managers have had to evolve into part politicians to cope with the challenges of current media dynamics. But AW has indulged too much in spin for far too long and it’s getting worse. He has become the Tony Blair of football. In deep, deep denial about his popularity and, now, his legacy. The best thing that can be said of Wenger is that at least he wasn’t responsible for the Iraq War. I jest but…

As the saying goes, all political careers end in failure.

He has the audacity to say he “built” Arsenal. I just want to shake him and slap him and yes, I do feel feel abusive towards him. He doesn’t give two hoots about us, he’s in it for himself, his massively swollen ego and his bulging wallet. He doesn’t appear to have a humble bone in his body.

It is also becoming increasingly clear how much he owes to GG’s legacy. I was thinking about Stroller’s best XI and concluded that only one of the current, so-called team would make it into that line-up, Alexis Sanchez (although I think Ozil still has the potential, with the right gaffer, to become an Arsenal legend but that’s another story which I’ve already written).

Lee Dixon recently revealed that AW didn’t think Cashley could defend at first but didn’t know how to coach him, so he got Tony Adams (oh, how we miss the real Mr Arsenal) to show him the ropes. That was a masterstroke and Cashley went on to have a long period of being the best left back on the planet. But it seems to me that AW lost his touch and started believing his own hype somewhere down the line, hence (the now defunct) Project Youth (which he’s trying to resuscitate by persisting with the out of form Iwobi). But despite that failure, his vanity and arrogance still know no bounds…