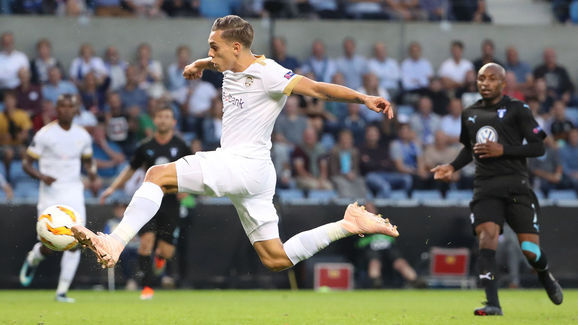 The Gooner understands that agreement has been reached with Belgian club Genk to buy winger Leandro Trossard for €25 million at the end of the current season.

There were reports in the media back in November that the club were keeping a close eye on him, with a view that they might strike a deal during the January transfer window that recently closed. However, with the club restricted to making loan signings, the move will have to wait. Trossard would have been secured to add an attacking option to address the loss of Danny Welbeck for the remainder of the season (added to the likelihood he will be released when his contract expires in June). Instead, a loan deal was struck for Denis Suarez. Will this decision enhance Arsenal’s chances of a top four finish? Time will tell, but you can check our experience and read up on Suarez’s career so far here.

Trossard has taken time to develop, spending four seasons out on loan at various second tier Belgian clubs up until 2016, where he scored consistently. In the two and a half seasons since his return to Genk, he has scored 33 goals in 93 appearances. However, 16 of those have come in 22 matches this season, which suggests significant improvement as he has become more of a fixture in Genk’s starting eleven.

Certainly, goals are probably easier to come by in the Belgian league, but given Trossard’s relative youth, there is belief at Arsenal that he can develop further as he adapts to the stiffer challenge of the Premier League. Genk has previously been a platform for Belgian players that have achieved great success in England, such as Thibaut Cortois and Kevin De Bruyne.

Trossard has been called up for the Belgian national team by Roberto Martinez twice this season, although he has yet to make his debut. One thing Martinez is not short of are attacking options in his pool of players.

The 23-year-old offers versatility, as he can also play in central midfield or as a second striker. Given Unai Emery’s flexible approach to tactics, this would make Trossard a useful addition to his squad.

Arsenal will not know how much they have to spend next summer until their attempt to return to the Champions League either succeeds or fails. Financially, they would be better off qualifying via a top four finish than by winning the Europa League, due to the way the TV pot between English clubs is divided. However, even if they fall short for a third season in succession, they will have some funds to strengthen due to the new Adidas kit deal. There is no question that the money to secure Trossard is in place.

Let’s just hope he is joined by some quality defenders…