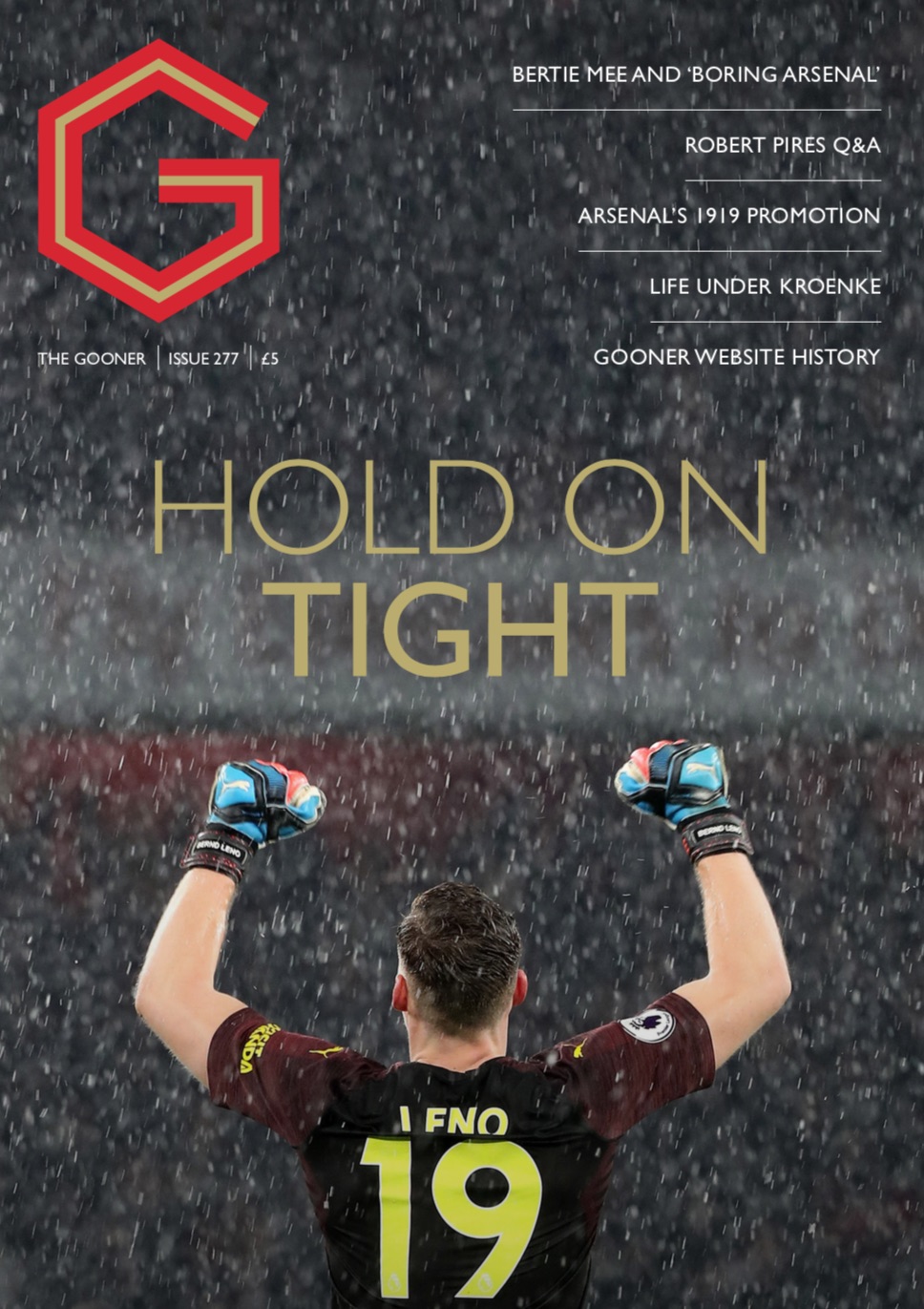 Cover of the new issue... NOT the last ever!

First up, apologies for the relative radio silence on this here website over the past week or so. I am aware that some people who do not indulge Twitter may not be aware that our campaign to continue printing next season ultimately proved successful. So now you know.

It has been an intense period for we at The Gooner, to say the least. Let me explain…

Firstly, we had to put a fair bit of time into the drive to recruit enough advance subscribers for The Gooner to continue printing next season. We needed 1,000 by midnight last Saturday. The reason for this deadline was so that we could go to press with the final edition of the season (details of which are here) knowing whether it was to be the last ever. That would at least give us the chance to sign off. As midnight neared, we were a few over 30 short, but then received a phone call from our gaming partners fansbet.com offering to pay for 50 subscriptions with the intention of 1) ensuring the fanzine continued and 2) using said subscriptions for promotional reasons. Fansbet give 50% of their profits to a variety of fan causes, of which The Gooner is one. So if you fancy a punt, we are only too pleased to recommend you sign up with them, selecting Arsenal as your team, and The Gooner Fanzine as your ‘branch’ during the sign up process. And you know where your money is going on the occasions your bet does not win.

So with thanks to them and the 960 odd subscribers who committed to subscribing to The Gooner for next season, we will continue in 2019/20. Yes, print media is becoming less popular (at least when you have to pay for it), and there is plenty of free fan opinion available online. But there is still a hardcore who like the feel of a magazine in their hands and prefer reading off paper than a screen. Long may that continue, although we may have to work harder with our promotion next season to extend even longer. We’ll see. So, aside from this post, not much from yours truly on the website since the victory over Rennes, for which my apologies.

Two other reasons it's been very busy. First up, as well as trying to raise the numbers to continue, we had the little matter of getting the aforementioned final issue of The Gooner this season to press. That kind of sucks the hours out of the day, although in the best possible way. That issue should arrive on UK subscribers’ doormats tomorrow morning. It will go on sale outside the stadium at the Newcastle game on Monday evening and remain on sale for the remaining home and away fixtures this season. It can also be posted to you should you wish to buy it through our Gooner store. Prices include postage, so for UK addresses, it’s £6. And if you are abroad it’s £7.50. Click on the red text to take you to the relevant store page where you can pay by credit card.

And the other reason it’s been so busy is that, when the subscription mailout was done, we inserted a reminder letter to all the subscribers who had not yet renewed that it was their final issue. This meant going through the 960 odd people that had renewed to create a separate mailing list to ensure they did not get a reminder to renew… as they already had. This was fairly time consuming, but had to be done as we did not want those good enough to have committed to think we hadn’t received their payments. On that note, anyone who paid by cheque can expect to see their cheques cashed over the next seven days. One other thing to mention. Those that gets their sub by paying our legendary seller Alex their £30 will have to accept my apologies. They will get a renewal letter with their issues, which, assuming they have paid Alex, they can safely ignore.

Truth to tell, after the mailout yesterday, this is the first ‘clear’ day yours truly has enjoyed without things being on the manic side for about a fortnight. So I am in catch-up mode, trying for starters to remember where I put my sanity.

We’ll try to get back on an even keel going forward with more regular postings on the website, and this is an opportunity to remind any would-be writers that it’s an open church here, not a one-man band, and that contributions are welcomed.

Until then, once again, huge thanks to all those that made the continuation of the fanzine for another season possible. We'll do our upmost to provide you with 68 pages of quality Arsenal reading every six weeks or so starting from 10th August. In the meantime, support your fanzine by buying the new issue!