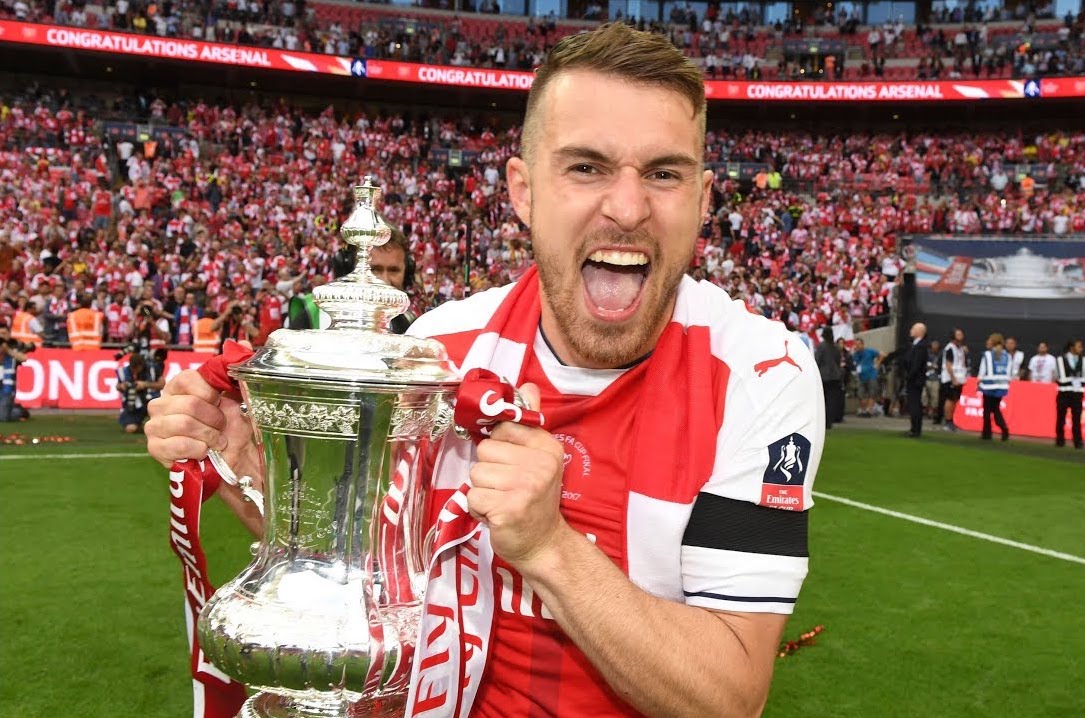 2017 - FA Cup winner with two years left on his contract.

Of late, debate has surfaced regarding Aaron Ramsey’s status as an Arsenal legend. This, as we know, is due to his departure to Juventus. For a generation of fans, the ‘Emirates’ generation (of which I’m part of), Aaron Ramsey is the only player of legendary status we’ve seen ourselves. There’s more to it than just two FA Cup winning goals.

Defining a ‘legend’ is contentious. Pivotal moments, outstanding quality and loyalty are obvious or stereotypical metrics. ‘Legend’ status is greatly subjective, based on a collective fanbase’s values and nostalgia of a player, created by iconic moments. Very few gain the illusive status of being a legend, with the latter of that criteria being the most critical – creating memorable moments. Giroud, for example – scored over 100 goals, many of which were sublime, but his Arsenal career lacked a defining pivotal moment.

When discussing Ramsey as an Arsenal legend, context is crucial. He was part of the ‘British core’ phase that fizzled out and failed, the only member to leave a mark. Ramsey was constant in an Arsenal era that never pushed for a league title, a standard barometer of success at Arsenal – yet still had a degree of success. In this context, Aaron Ramsey is undoubtedly a legend of his period, in my view the singular undisputed claim to such status in the entire Emirates era.

Let’s go back to tackling that criteria, starting with Ramsey’s qualities. As with any Wenger player, Ramsey has technical ability in abundance. Passing range and smart control allowed him to be the metronome of Arsenal’s midfield, not quite box-to-box nor a playmaker. Some happy medium that Football Manager addicts would be able to better term. Physicality is also something Ramsey possesses; his engine is formidable. His casual nature and stylish play attracted Juventus, in a slower league Ramsey will likely flourish, and who would bet against his new side winning another title - use a mansion bet bonus code 2019 if you feel like backing the Welshman to win a first league winner’s medal.

Ramsey’s talents were best displayed in the first half of the 2013/14 season. In 23 league games Ramsey scored 10 and assisted 9, an incredible return for a central midfielder. His scintillating form lifted Arsenal to the summit of the table, combining superbly with Özil and Giroud. Ultimately, Ramsey’s injury mid-way through that season was a crucial factor in Arsenal’s title bid fading. Nevertheless, the 2013/14 season saw Ramsey truly lay out his talents, reaching his peak for Arsenal to confirm his standing as an exceptional player.

One ability that will not be forgotten is Ramsey’s knack for scoring absolute worldies. The type to leave your jaw hanging. Goals that leave you clasping the top of your head, as you gawp at the replays. Ramsey is a master of all trades when it comes to blockbusters. See Galatasary for an outrageous 30-yard half volley. See CSKA, Fulham or Spurs for a dainty, audacious flick. See Portsmouth or Norwich for a silky solo goal. See Liverpool for a thump. Anything he’s missed?

Ramsey understands Arsenal, his passion for the club cannot be underestimated. Although the full details of his exit remain dubious, I believe given the right money he would’ve stayed. Regardless, Ramsey appreciates the pride of playing for Arsenal. Take the most recent North London Derby at Wembley, where Ramsey scored his third goal away at Spurs. This isn’t a happy coincidence. Ramsey relishes these games, his celebrations toying with Spurs fans highlight this. For over 10 years, Ramsey has worn the cannon with pride and professionalism.

Standing out at Arsenal is challenging. That’s why debate surrounds Ramsey’s legendary status. There’s a host of last-minute heroes, prolific strikers, dominating midfielders and noble leaders. Amongst those, Ramsey has a place. Two FA Cup winning goals will be the moments Ramsey will be remembered for. Ramsey was the man that put the dreaded drought to bed, buying time for Wenger. All of this occurred after a career threatening, ability stunting injury, infamously at the hands of Ryan Shawcross. Such achievements justify the label as a legend.

Crucially, as the title suggests, Ramsey is a legend for a generation. Considering the move from Highbury was back in 2006, there is now a large contingent of youthful Gooners, myself included, that only really know The Emirates and hazy elements from the backend of Highbury. For that generation Ramsey is the only legend seen in the flesh. For many in this demographic, Fabregas is the pinnacle and only rival to Ramsey’s claim, but does Fabregas qualify as an Arsenal legend? Fabregas was a better player than Ramsey is, he had superior natural talent and performed on a more consistent basis. However, Fabregas failed to win trophies after 2005 and his personal iconic moments don’t match up to Ramsey’s. Needless to mention, Fabregas moved to the Blue segment of London, having already broken hearts by setting of for Catalunya. In ten years, Ramsey will be remembered more fondly by fans than Fabregas is now.

The generation mentioned above will largely recall the 2014, 2015 and 2017 FA Cups as the first major silverware they saw Arsenal win. In two of those Ramsey clinched it. The ‘Emirates’ generation will never forget those two moments when Ramsey scored against Hull and Chelsea under the Wembley arch. Combine this with 10 years of loyal service and countless outrageous goals, and it’s hard to argue that for those of a certain age Ramsey is the only justifiable ‘legend’ they’ve seen. Essentially, that’s what makes a player lift into legendary status. Collective memory from a generation of supporters creating a longstanding legacy and future nostalgia.

Ultimately, it was Ramsey who ended a trophy drought that loomed sinisterly over Arsenal. Ramsey’s header clinched a trophy against a London rival at Wembley. Such memories only appreciate with time, only in future will Ramsey become widely accepted as a legend, with the aid of nostalgia. But to me at least, he’s already gained that status.