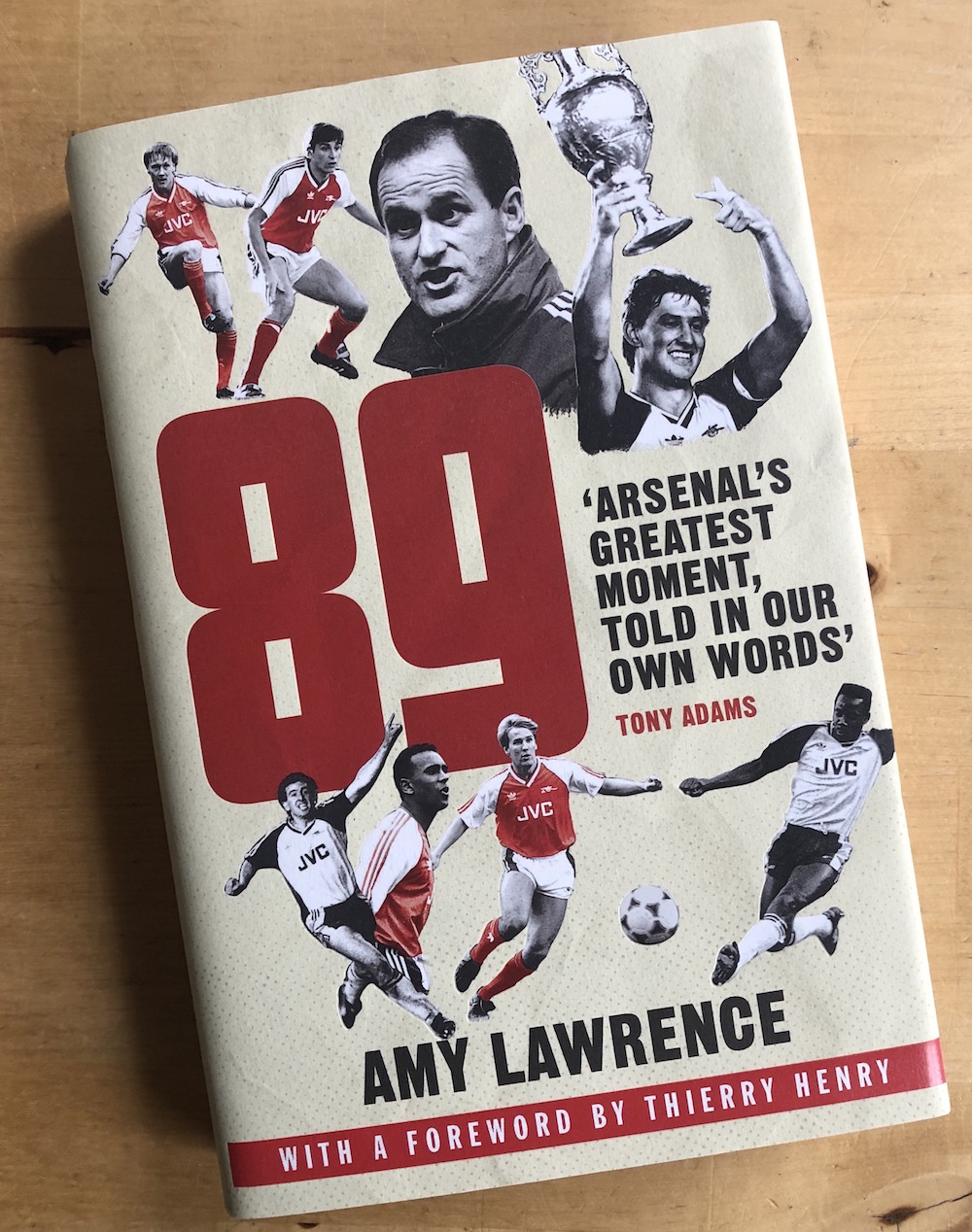 Cover of the new book

So just under two years after the release of ‘89’, the documentary film about Arsenal’s legendary title winning 2-0 game at Anfield, comes a book on the same subject by Amy Lawrence, who was one of the main figures behind the film. As Amy says in the introduction, when discussing the film, “it became obvious in the editing process, when so much golden material hit the cutting room floor, that it would be a waste to leave so many fascinating memories hidden”.

However, the film mainly looked at the game from the point of view of the players, manager George Graham and the referee on the night Dave Hutchinson. The book not only expands on their contributions by featuring a lot more from them, but also from the fans and family members of the players.

The story is told in a sequence that begins with George Graham’s arrival at the club as manager in 1986, and gives context of the build-up to the 1988-89 season, the progress of the club during it and then the day of the game itself. It’s all done in quotes, including a few from Amy herself, then simply a fan whose published writing up to that point was the occasional match review in The Gooner.

There are some fascinating stories about people missing exams to attend the match, being able to watch the game at work, being in the home section at Anfield and getting duped by the police thinking they were going to be led round to the away section only to be ejected from the ground.

George Graham’s role in the mental as well as the more obvious tactical preparation for the game is made clear and acknowledged by the players, and it was interesting to be reminded that even he had given up on the 2-0 in the moments before Mickey Thomas scored that fateful goal. It was also revelatory to learn that the referee only spoke with his linesman after the opening goal by Alan Smith to placate the Liverpool players, and that there was never any doubt he was going to award the goal as his linesman’s running back to the halfway line was an agreed signal that there was nothing to rule out Smudger’s effort.

It must have been a difficult task both editing and selecting from the large number of fan accounts of the game, but you get the flavour of how many different ways the game was experienced.

The fixture is very much relayed in the context of its playing only weeks after the Hillsborough tragedy, the very reason it ended up being played on a Friday night the week after the FA Cup Final. There is an account of the moment that eight of the late coaches finally arrived at Anfield fifteen minutes after the game had kicked off and the scrum that developed at the turnstiles, before a policeman reminded everybody of what had happened only weeks before, and the fans got into orderly queues.

As it turned out, the only incident of note that anyone missed was an early Steve Bould headed chance, and everyone was in by the time the real drama began in the second half with the first goal, followed by Mickey Thomas’ miss from a similar position that he scored, and of course that famous second goal. All relayed from multiple perspectives.

There are some interesting quotes from George Graham that resonate now, such as “We had a strong back bone to us and sometimes you think nowadays some teams lack that. If you’ve got too many who are not as mentally strong then you go to some grounds and it’s not as easy to win matches.”

So an entertaining read for any Arsenal fan that wants to remind themselves of a remarkable landmark in the club’s history, and an education to those too young to have experienced it.

The winner of our competition last weekend to win a copy of the book is Ayomide Brown from Clapton, London.