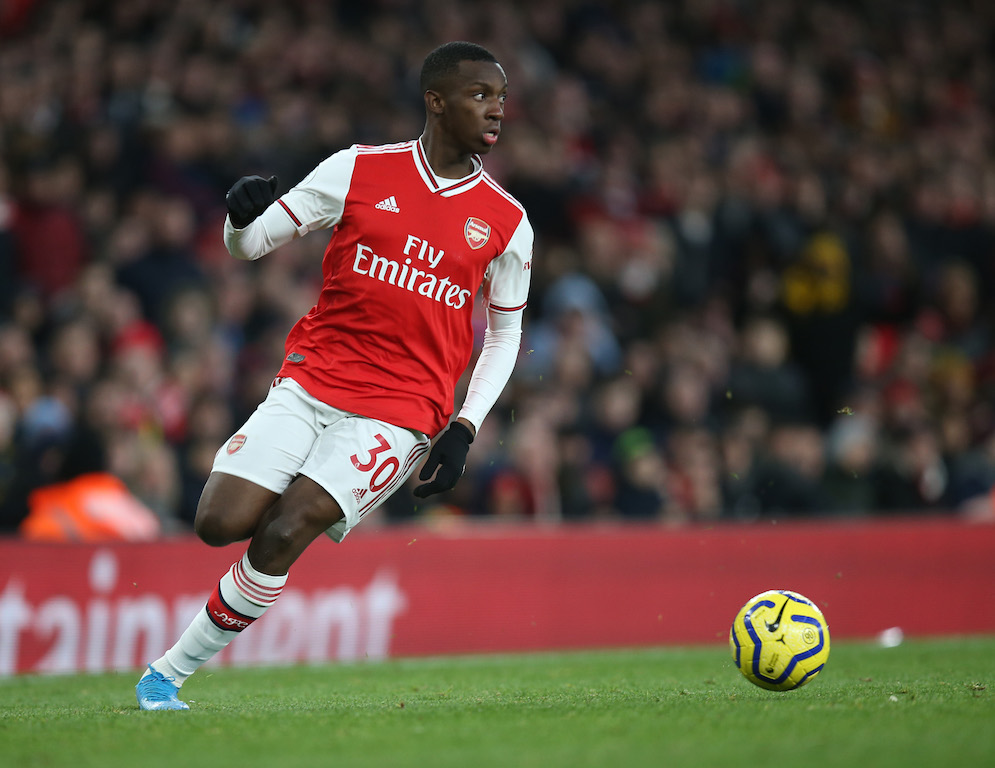 Arsenal striker Eddie Nketiah grabbed a hattrick against Charlton in a 6-0 victory for Mikel Arteta's side on Saturday as the Gunners gear up for their Premier League clash with Manchester City on Wednesday, June 17. PICTURE: Nketiah in action against Sheffield United at the Emirates in January. CREDIT: OFFSIDE

Eddie Nketiah is a young man in a hurry, keen to become a regular starter under Arsenal head coach Mikel Arteta.

Nketiah grabbed a hat-trick on Saturday as Arsenal thrashed Charlton Athletic 6-0 in a behind-closed-doors friendly at the Emirates.

The academy graduate, who turned 21 at the end of May, has forced his way into Arteta’s first-team plans this year and did his first team prospects no harm at all by netting all three of his goals after the break.

Arteta’s Gunners are counting down the days to their Premier League return against Manchester City on Wednesday, June 17, when they travel to the Etihad – with Nketiah enjoying a perfect warm-up to the clash at the Etihad in the rout against the Addicks.

The Lambeth-born striker grabbed his first goal following a goalmouth scramble, before he calmly converted a one-on-one.

He headed home his third following a good ball from fellow graduate Joe Willock – to send boss Arteta a strong message that he is ready to make his mark against City.

Layth spoke to Nketiah in an exclusive interview last summer as the talented youngster outlined his plans for the 2019-20 campaign.

As Arsenal’s preparations ramp up ahead of the visit to the Etihad we thought it would be an appropriate time to revisit what the promising striker outlined in the summer 2019 – all of which remain as true as they were this time last year.

Eddie Nketiah gives you a firm handshake and meets you with a fixed stare.

While the 5ft 9in Arsenal striker might be slight in appearance, the talented 20-year-old exudes a steely resolve in his bid to become a fixture in the first team for years to come.

Nketiah is speaking at the club's Adidas kit launch in the Armoury store next to the Emirates ahead of pre-season starting on Friday.

All around passionate fans clamour for him to sign their newly purchased shirts.

While there is genuine excitement at the prospect of meeting an Arsenal striker, it is perhaps symbolic that there are absence of garments with his name printed on.

The highly-rated forward is aiming to change that for the forthcoming 2019/20 season - even if the question of a loan move away from north London to boost his development remains.

Nketiah was all set for a loan move to the Bundesliga at the end of the January transfer window, with Unai Emery keen for his young guns to experience life in German top flight.

Reiss Nelson shone at times during his spell with Hoffenheim, grabbing seven in 23 games - even if Emile Smith Rowe saw his season stalled by injury after joining RB Leipzig in January.

Augsburg had been expecting to take Nketiah on a temporary basis until the end of the season during the same window that Smith Rowe departed, but the deal collapsed - leaving Nketiah in limbo.

He was too good for the U23s, but too raw for first team football.

"It was disappointing the loan fell through as I wanted to play every game but my goal is to play for Arsenal," Nketiah said.

"There were talks of a loan in January and of course that's an option now but it's not completely down to me.  I need to speak to the manager.

"At the moment I'm just focusing on going back to Arsenal and giving my all and seeing where it gets me."

While he grabbed his first Premier League goal for the club in the final minutes of Arsenal's last game of the season in the 3-1 victory over Burnley at Turf Moor, the season was largely a frustrating time for the former Chelsea youth player.

The forward had been busy earning a reputation as a lively predator at U23 and previously at U18 level after the club snapped him up as a raw 16-year-old.

Chelsea deemed him too slight to make it as a footballer but Nketiah has already started to prove them wrong, even if he only made five league appearances last term. He also discovered professional football is an unforgiving environment.

Emery selected Nketiah to start at Bloomfield Road against Blackpool in the third round of the FA Cup. While the potentially tricky banana skin cup tie was skilfully navigated after Arsenal eased to a 3-1 victory, Nketiah did not have the best of games.

Two early chances were spurned which fed social media trolls if not loyal fans who were encouraged by the fact the dangerous forward had positioned himself in the correct areas to be able to shoot at goal.

Nketiah's body language slumped after missing the chances and he looked slightly shaken - which, coupled with the possible move to Augsburg falling through ensured he had a disappointing few months.

Arsenal are set to address Nketiah’s future when pre-season starts again on Friday, with loans manager Ben Knapper due to sit down with Emery and his new No2 Freddie Ljungberg, who knows Nketiah well from managing him at U23 level.

However, six months on from Blackpool, Nketiah is in a good place, after reflecting on the time while refusing to be downcast - using the experience as motivation to succeed - while assessing what he and Arsenal can do differently from August.

"At Blackpool I missed a couple of chances but I think I played well and was lively. It happens. I don't think I had a dip after a possible loan spell fell through," he said.

"To score my first Premier League goal at the end of the season was good for me, it was beneficial for me. The goal at Burnley definitely gave me a boost.

"It gives me a lot of things to look forward to in the future and I just want to keep progressing.

"Whichever way I go about it my end goal is to play for Arsenal."

That steely resolve will go a long way to ensuring his ambition is fulfilled - even if it comes via a loan spell first.

Layth’s exclusive interview with Nketiah was first published at Football London in 2019.