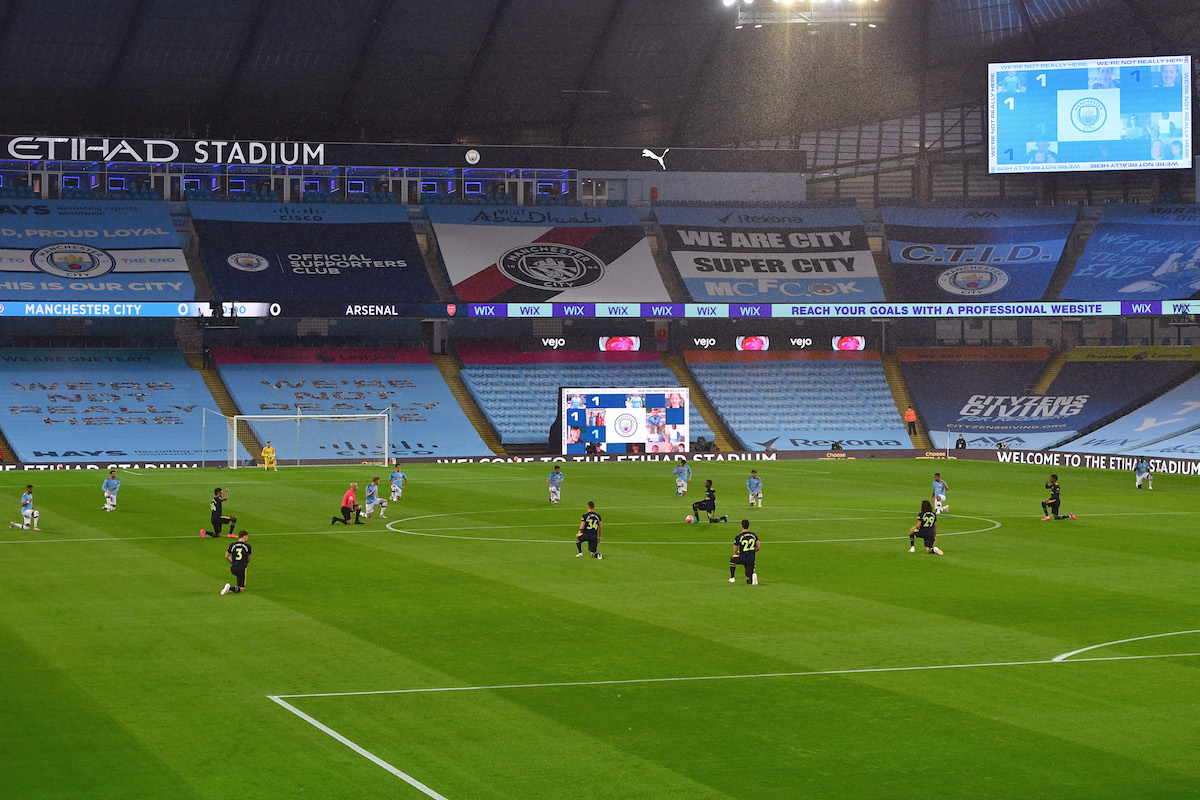 Players take the knee pre-kick off in a deserted Etihad Stadium. Photo: Offside

This morning, you have to wander whether abandoning the season after all might have been the better option for Mikel Arteta, such was the potential damage of the visit to Manchester City to play the first Premier League match to suffer postponement over three months ago. Online bookies such as bet365 had long odds on anything but a home win, and they weren’t wrong. The only upside of the evening was that Sheffield United, above Arsenal in the table, were only denied extending the points gap even further due to some dodgy officiating at Villa Park.

It was always going to be an interesting selection for the first game back, and up front, it was a case of youth being given its head with Nketiah, Saka and Willock making up three quarters of the attacking players. Alex Lacazette and the expensive Nicolas Pepe were on the bench and Mesut Ozil was not even in the 20 man squad, with the head coach citing tactical reasons. Maybe the club have got wind of a likely offer for the player and don’t want to chance him getting injured? Or is Ozil simply not producing in training? Claimed he was ill? Who knows. Sad to say, his replacement Willock was largely anonymous, unable to influence the game against far more experienced direct opponents. The centre-back pairing was Mustafi and Mari, with the first choice full backs and Guendouzi and Xhaka in front of the backline.

Arsenal flew up not too long before the game, presumably observing the agreed protocol for these behind closed doors matches. Foul weather greeted them as Manchester’s reputation for rain was confirmed. The players came out to a largely deserted stadium, except for some City employees. We had the ridiculous contrast of subs sitting two metres away from each other in the stands (although at least that kept them dry) wearing face masks, whilst their colleagues on the pitch were playing without a second thought about contracting a virus. And everyone in the stadium had been tested before being allowed in.

Still, on with the game and the players took the knee immediately before kick off as well as the player names on the shirts being replaced with the ‘Black Lives Matter’ wording. This will happen in all of the Premier League games over the coming weekend. Football in this country has worked hard to stamp out racial prejudice, although how much influence this will have when it comes to stuff like job opportunities remains to be seen.

As for the game, pretty much everything that could go wrong did for Mikel Arteta. Granit Xhaka was injured early on, with Dani Ceballos replacing him. Ceballos did ok in the earlier stages of the game, adding a bit of thrust to the Gunners’ play. There were some sniffs of danger for Eddie Nketiah, but he wasn’t able to get any meaningful attempts in. For the most part, City were in control, and Arsenal’s situation worsened with another injury – this time to Pablo Mari, who was replaced by Luiz.

What can be said about the events that followed? The Brazilian, whose defensive abilities have always been the subject of debate, gave his team-mates no chance of getting anything from this match with his contribution to the first two City goals, before leaving them a man short. Arteta, after the match, indicated he wanted Luiz to remain for the final year of his deal. Really? Maybe he felt he couldn’t say anything else, but contractually, it may be possible to stop paying the player on 1st July. Luiz didn’t make a great case for his retention and with the club’s financial position getting unhealthier by the day, it’s not hard to see that the bean counters and football executives have already slashed the cost of the Brazilian after the next fortnight. He could play again in the Sheffield United FA Cup quarter final, but I don’t see it. The player seemed unhappy that a decision has not been made already, but surely the writing is on the wall. Luiz’s likely final appearance in an Arsenal shirt will be memorable for all the wrong reasons.

There’s not much else that needs saying about this game. Even under normal circumstances, it was a home banker. I watched the match in the company of the Highbury Spy, who I normally sit next to at home matches. He had subscribed to NowTV to watch the game, which meant we had no choice but to hear the crowd effect soundtrack. A shame, as I would have been more interested in hearing the players and Arteta shout, but there you have it. What I will say is that although, visually, it was odd, actually hearing a crowd noise did take away from the reality that this was not a normal football match. It did seem to matter in terms of perception – the players were competitive, it wasn’t like a training game – at least until City were 2-0 up, but that was nothing to do with the atmosphere.

The task now for Arteta is to focus minds on the matches against less daunting opposition in the hope he can salvage something out of this very strange season. Brighton, Southampton, the quarter final, and Norwich. Then a sequence of Wolves, Leicester, Spurs and Liverpool. Confidence needs to be restored, no doubt about that. Arteta’s decision to field such a young striking line-up last night may point towards the future, but these players are going to have to do better. I guess, for most of the first half last night, the team were in the game, at least going by the scoreline, but Leno had already pulled off a couple of excellent saves before Luiz entered the fray. It really did feel like only a matter of time before the goal would come.

Credit to the ten men for holding out for so much of the second half, but in fairness, City were playing in flip flops by then. It’s one game. A bad one. We’ll have a better idea of just how much trouble the club are in by the time they entertain Norwich in two weeks’ time.