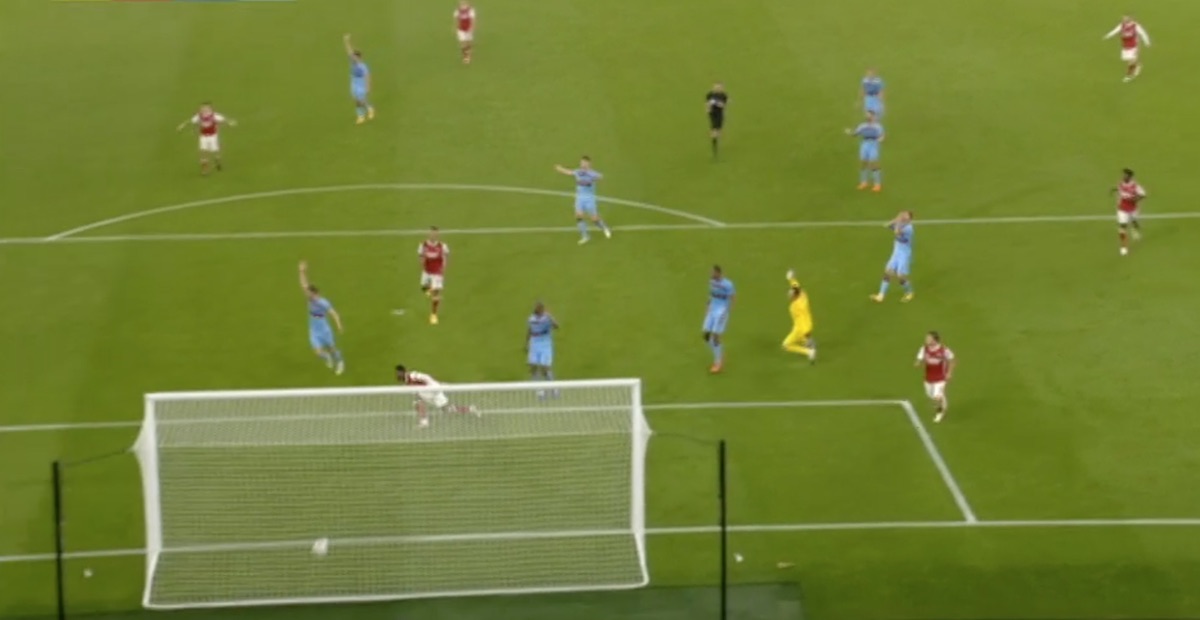 Arsenal’s last match before a paying audience before the lockdown was a pretty laboured Premier League win against West Ham at the Emirates. Fast forward six months, and this season’s edition of the fixture, and on one level, little has changed. Yet, fans can feel better about this particular undeserved win. This is because of what has transpired since – victories over Liverpool, Manchester City and Chelsea have renewed confidence. The critical presence of the club captain has been secured until summer 2023. Arsenal are in the top two with maximum points from their fixtures so far.

If the league is to be more competitive at the business end of the table this season, and Arsenal have any aspirations to be involved, beating the likes of West Ham at home is an example of a non-negotiable, to paraphrase Mikel Arteta. And on the day, it doesn’t matter how. Long term, the team will need to make less heavy weather of inferior opposition, as we saw against Fulham last weekend. The problem that West Ham presented was overcome eventually, as the Gunners had a lot of joy down the right side of the Hammers’ defence. However, what cannot be ignored was that David Moyes used a similar approach to nullify Arsenal to the one they themselves used in those aforementioned victories over the top teams. And if they had a more clinical finisher than Michail Antonio, I could easily be discussing an away win in this piece.

There were two planned changes to the eleven that started against Fulham. Saka replaced Maitland-Niles at left wing back, whilst Ceballos came in for Elneny, to partner Xhaka in midfield. However, Kieran Tierney suffered a hip injury in the warm-up and was replaced by Kolasinac. Tierney is a cult figure with the Tesco carrier bag thing and his reminiscence to an old-style no-nonsense defender. However, at times, I do worry that the club have bought a crock. Time will tell.

It was a pretty unremarkable opening quarter to the game, although the free header enjoyed by Ogbonna from a corner did not make for pleasant viewing. Fortunately, Alex Lacazette was more clinical with his header after 25 minutes, when nice work from Saka and Aubameyang presented the striker – who made a good run to find space – the chance to put his side ahead, which he took with aplomb.

Still, the work in progress nature of this Arsenal team was demonstrated by the equalizer, right at the end of the first half. The team had a habit of conceding goals at this time, both at the tail end of Arsene’s tenure and under Unai Emery. Caught on a counter attack, Saka was nowhere as his opposite number Fredericks created an overlap on Arsenal’s left flank, leading to a ball across the face of the goal that Antonio was able to convert. There was an argument that Xhaka might have covered the player that Kolasinac was tracking to compensate, and years back, the likes of Gilberto has greater nous to react to this kind of situation, but the club simply does not have that calibre of midfielder right now. No doubt the video of that goal will be played a few times to his squad by the manager.

The second half was tough viewing. Antonio could have scored on two further occasions and Arsenal really struggled to find fluidity and cohesion against a stubborn defence. Pepe and Nketiah replaced Willian and Lacazette to try and freshen things up. The lock was eventually unpicked thanks to good work from Saka and Ceballos – the two players that Arteta added to his eleven when he the teamsheets were handed in. Granted, Saka may not be the best of left-sided defenders, but he more than compensates at the other end – playing significant roles in both goals yesterday. Ceballos put the ball across to Nketiah to administer a straightforward tap-in. He made it easy and the youngster had the intelligence to remain onside.

David Moyes was justifiably aggrieved his team finished with nothing and are already in the relegation zone. The handball law has changed and Gabriel would have probably conceded a penalty had the match been played three months ago. On Arsenal’s side, there is no question that if you are going to play poorly, winning whilst doing so is no bad thing. Liverpool have developed a habit of doing this in the last couple of seasons and it has served them well. As Arteta said after the match, for a long time, this has been the kind of performance that has seen the team either draw or lose. The difference now seems to be the ability of the forwards to take just enough chances, and football is about fine margins. Swap Antonio for Augameyang in last night’s line-ups and Moyes would have been the upbeat one in the post-match reflections.

Defensively, too many chances were conceded for comfort. In eight days’ time the team travel to Anfield for a Monday evening kick off (after Wednesday’s League Cup tie at Leicester, which we will all be trying to find a stream for, unless Arsenal let us watch it though the official site). Facing Liverpool on their own patch will give us a good insight into how much progress Arteta has been able to make in the organization of his players. Wins at home and a Wembley victory on penalties over Klopp’s side have been fantastic and offered genuine hope. The next three Premier League away fixtures (Manchester City and Manchester United follow) will give us some genuine perspective. It is a plus that these matches will likely take place without a home crowd in attendance.

On that note, the recent restrictions of gatherings of more than six people look to have put paid to the mooted plans to return to stadiums in limited numbers in early October. Who knows when the Emirates will next see season ticket holders go through the turnstiles? Hopefully by the time of the return fixtures against the top teams Arsenal are playing soon anyway…

To be notified when there is fresh content on my blog (and in truth that will most likely be the day after matches, but there you have it), follow me on Twitter - https://twitter.com/KevinWhitcher01.

I will also be contributing a couple of pages to the print version of The Gooner each issue over the coming season. Subscribe here if you haven’t already (first issue out in early October) - https://shop.onlinegooner.com/index.php?cPath=30

As for the blog itself – that can be found here - https://kevinwhitchersarsenalblog.blogspot.com. The first handful of pieces will be posted here for the awareness, but long term, the blog will be where to find my pieces in the event that you have any wish to read my own take on events at Arsenal.