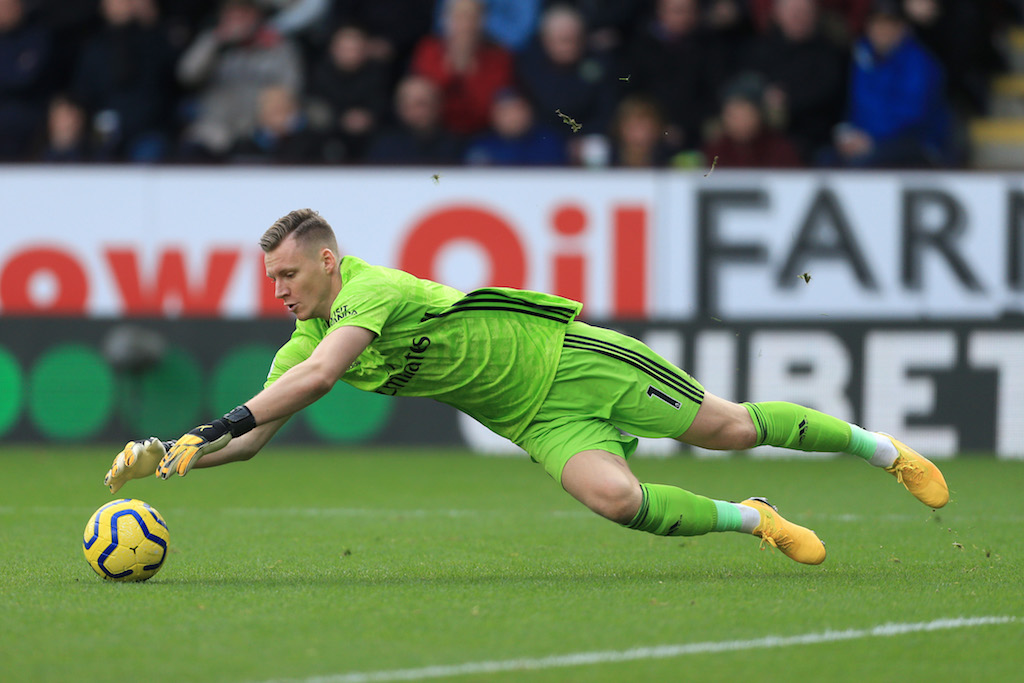 Bernd Leno is Mikel Arteta's No1 choice between the sticks.

What was glaring to me on Monday evening at Anfield was Arsenal’s inability to beat Liverpool’s press during their 3-1 defeat.

Granted, they are the world’s best pressing team but how we so seldom passed their first line of defence is damning.

Bernd Leno rarely picked out the clever passes required to break the press and often shirked responsibility to do so.

Favouring to instead pass it five yards to our centre backs, putting them in danger. The fear in his eyes was palpable.

Furthermore, he was disappointing with his hands too, failing to even display his main strength – shot stopping.

When Mo Salah struck at goal, he palmed the ball straight into Sadio Mane’s path.

Choosing Leno over Emi Martinez may prove to be a costly mistake for Arteta. Leno breathes an air of anxiety into our defence whereas Martinez did the opposite.

For their third goal, David Luiz tried to head a ball clear that could have easily been collected by Leno.

But there was no call of ‘mine’ from the meek German keeper, no conviction to come and make the ball his.

Instead, Luiz, under no pressure at all, but without the communication of his keeper to know so, headed straight to Diogo Jota who put the game to bed.

It’s disappointing that we shirked Martinez who had been at the club for over ten years and who brings obvious qualities that Leno doesn’t, for a guy that’s been error prone since he arrived.

Why not let them fight for their places and let that competition drive them?

There’s a good keeper in there but having no one to push Leno is only going to see him stagnate, if not decline.

We could have sold plenty of other players, we didn’t have to sell Martinez.

We’re now only days away from the end of the transfer window and have failed to sell a single piece of our Amazon rainforest of deadwood.

Hector Bellerin wouldn’t be pleased but this makes me yearn for Jair Bolsonaro rather than Edu Gaspar. The Brazillian army over Willian.

Anyhoo, with or without Emi, Arteta got it wrong yesterday. Ainsley Maitland-Niles is a good utility man but Tierney is a better wing back than he and Gabriel is a better centre back than Tierney.

Gabriel and Ceballos may have had fitness issues. Yes, that old chestnut.

Though I do wonder why those chestnut trees don’t grow in Liverpool.

Their absence was felt. Ceballos, immediately after coming on, provided the guile that we missed all game.

It was too negative to drop him in favour of Elneny. Besides, has Mikel forgotten how brilliant Ceballos has been at breaking down play and holding solid defensive positions?

I sensed a panic in omitting the pair of them.

Though it’s true that last night’s game will be the most difficult one we have all season, it still made for stark viewing.

The consistently fruitless playing out from the back was Emery-esque and a first-half record low of two touches in the opposition box is exactly the kind of statistic that Unai Emery was vilified for.

We should have at least occasionally mixed it up and went long, bypassing the press in the same way that Pep Guardiola’s Bayern found success against Jurgen Klopp’s Dortmund.

Their insanely high line wasn’t broken once by Aubameyang.

He was a ghost out there.

Lacazette showed no composure in front of goal and quite frankly, at 29, I think we should cut our losses while we can still receive a fee.

Thomas Partey can’t come soon enough - he'll add the toughness to our team that we're crying out for.

We still look a soft touch, Tierney was targeted by Liverpool’s dirty tactics yesterday but we never pressure the referee into justice.

Time will tell whether we are serious contenders for top four.

You almost need to take your mind off matters by playing Energy Casino and their 100s of games including Lucky Reels, Twin Spin, Lucky Fridays and many, many more. Try your luck gry hazardowe as they say in Polish. Lucky Tropics and Wild Jack are also well worth a punt.

Anyway, back to the football, facing Manchester City, Leicester and United next month will provide a better barometer for where we are at.

But I’d be lying if I said I was confident.

The poor team selection yesterday and poor squad management over this transfer window has me worried about our future endeavours.

I hope that I’ve just had my thoughts clouded by emotions.