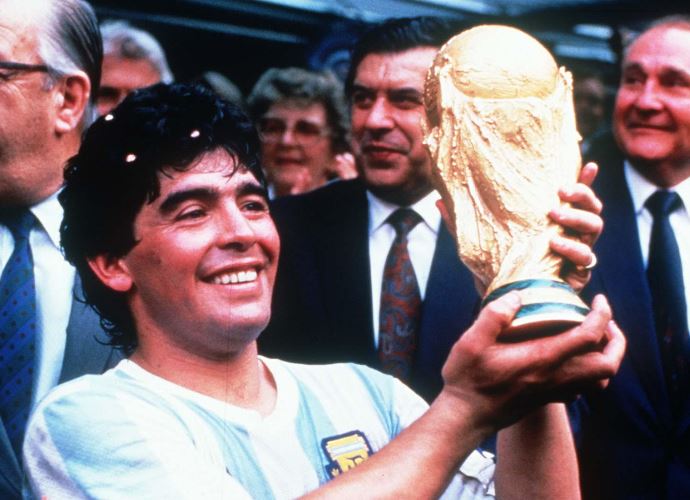 The year was 1979, and Arsenal boss Terry Neill was eyeing a teenage Argentine prodigy making waves in his homeland.

Jet black hair, a diminutive stature at just 5ft 5in but with legs built like tree trunks, a 19-year-old Diego Maradona was mesmerising the crowds at Argentinos Juniors with his quick feet, vision, close control and eye for goal.

It would have been a major transfer coup for the Gunners with a number of clubs already monitoring the highly-rated teenager, but the club were clearly being ambitious having also lined up a move for Glenn Hoddle from rivals Tottenham.

Neither transfer would materialise.

Hoddle rejected the chance to move to Highbury after having reservations about crossing the north London divide, while a move for Maradona fell through.

"When I was 19 they tried to buy me and another player from Argentinos Juniors – around the time Ricky Villa and Ossie Ardiles signed for Tottenham," said the Argentine in a 2008 interview.

"But it didn’t happen. I sometimes wonder what might have happened."

Neill wasn't done in his pursuit of the mercurial Maradona, and he would try his luck again three years later.

During the intervening years, Arsenal had hit a bump. 1980 saw the Gunners lose two finals in the space of four days as they lost to West Ham in the FA Cup final and then Valencia in the Cup Winners' Cup showpiece.

They also sold and then failed to replace Franck Stapleton and Liam Brady, with results taking a turn for the worst as Highbury attendances often fell below 20,000.

It was clear they needed a spark, so back they went for Maradona in March 1982.

As for the Argentine, he'd left Argentinos Juniors in 1980 after 116 goals in 166 games to join Boca Juniors, rejecting a host of offers in the process. 28 goals in 40 games followed for Buenos Aires-based giants, and so did attention from Europe.

Former Sheffield United boss Harry Haslam helped broker Arsenal's move. During his time as manager at Bramall Lane, Haslam had tried to sign Maradona as a 17-year-old in 1978 after spotting him on a scouting trip, but the Yorkshire club failed to stump up the £200,000 fee.

A £4m deal was agreed between The Gunners and Boca, but then the problems started.

Argentinos Juniors were still owed the first £1m instalment of Maradona's transfer to Boca. They took them to court to get it too, with a judge ruling Boca couldn't sell the player until the money had been paid.

Then the deal ran into problems in the House of Commons. Tom Lorney, Labour MP for Bradford, demanded Sports Minister Neil MacFarlane open an inquiry into the deal to help curb the 'excessive fees' being paid by football clubs.

Arsenal had found a way around this issue though, and planned to pay the transfer fee using sponsorship - much like they had planned to do in the 1970s when heavily linked with a move for Johan Cruyff.

The final blow to Arsenal's hopes of signing Maradona came from the FA who vowed to block any move.

"Maradona, who is reported to earn a staggering £7,500 a week with Boca Juniors, broke his silence on a possible move to Highbury which had been set up by former Luton and Sheffield United manager Harry Haslam.

"Haslam has been acting as an Arsenal spy in South America but as he travelled back to London with his report the Football Association vowed to block any move by Arsenal to bring Maradona to England.

"League secretary Graham Kelly confirmed that the Management Committee didn't want foreign players from outside the EEC being granted a work permit for two years."

Sadly for Gooners, the move never happened. Vladimir Petrovic was signed from Red Star Belgrade instead and although he became a cult hero amongst the Highbury faithful, supporters can only dream of what Maradona would have done in the famous red and white.

If Arsenal's move had progressed any further it would have hit a further stumbling block, with the UK and Argentina going to war in the Falklands at the beginning of April 1982, just 11 days after the newspaper reports on his possible arrival.

Instead, Maradona would join Barcelona that summer in a world-record £5m deal and the rest is history. He would go onto to become one of the greatest of all-time, representing the likes of Napoli and Sevilla while also winning the 1986 World Cup with Argentina.

What can be said for certain is that for all his controversies and misdemeanours, Maradona was the star of his generation and will forever be remembered as one of football's greats. For some, he is even the greatest.

The thoughts of everyone at the Gooner Fanzine go out to Diego's family and friends at this difficult time.