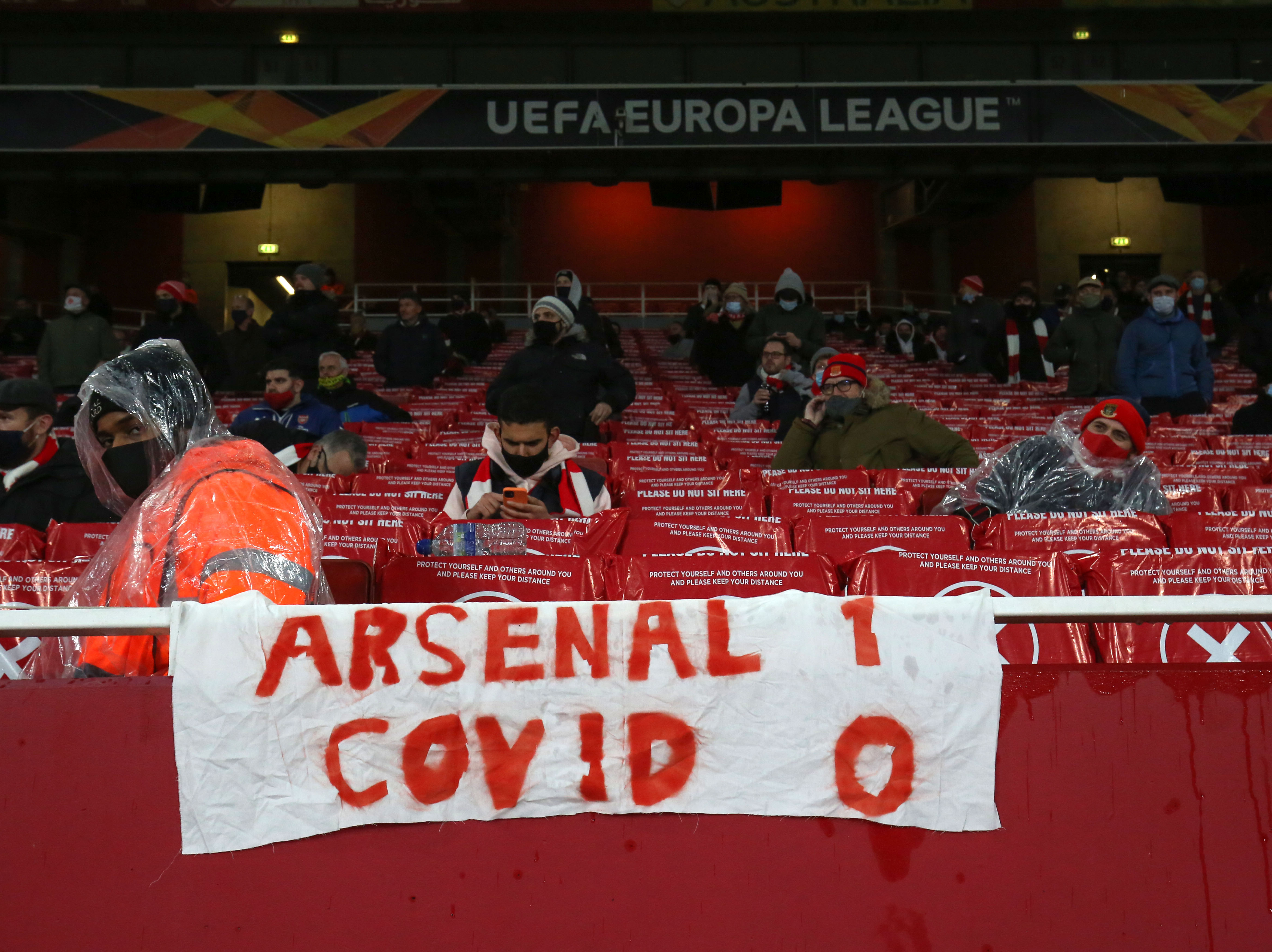 They say football is the most important of least important things - and it was good to be back at The Arsenal.

Read Gooner editor Layth Yousif's take on a night of hope at the Emirates as 2,000 fans return after eight months away.

The Gooner Fanzine was doing a steady trade outside the big blue neon station sign in N5, as punters emerged from the subterranean tunnels.

It may have been a nippy night in north London, but there was love in the air, and hope in the heart.

‘It’s good to be back”, said a man to the Gooner as he bought a copy. He was sporting an Arsenal scarf and a Joe Biden baseball cap, another reminder of a return to a semblance of normality in other spheres.

Fans headed from the station on Gillespie Road, with its evocative blue underground signage fading into the black night behind them, as, with a spring in the step, they headed towards the vivid floodlit bowl of the Emirates - looking as if a space ship from another galaxy had landed in an unprepossessing part of the capital.

It was a familiar walk for so many. On Thursday evening it was also a comforting one

For supporters were allowed back at the Gunners home ground. 2,000 exactly. Which isn’t much in a 60,000 capacity stadium. But on Thursday night, it was, it really was. For it symbolised hope and renewal.

They returned after a gap of 241 days and two lockdowns.

Arsenal fans had last cheered their heroes at a home match in north London on March 7. The day Alex Lacezette scored to beat West Ham 1-0.

Who knew what would happen on that dull, gunmetal grey, early March afternoon, for the remainder of this tortured year?

Back then, who could have forecast the dreadful surrealism of existing, surviving, living in a pandemic? From then on, all had changed, changed utterly.

In the eight, painful, worrying, interminable, intervening months, people have suffered through this dreadful crisis - some more than others - battling with loss and hardship and fear and uncertainty.

Yet, for 90 minutes, sport, and football and Arsenal restored a slice of socially distanced hope last night after such a long time detached.

The Premier League’s return back in June brought promise

But there was still something missing. Something vital. Something overlooked by those who fail to understand sport. Spectators. Fans. Supporters.

Everyone knows the phrase ‘Football with fans is nothing’. Because it is true.

The synthetic, manufactured output we have had to watch since the summer is simply not the same as the real thing. Many aspects have grated.

Even with - or especially with - the canned noise of fans piped into living rooms around the globe.

Sport – and football – are always seen as frivolous activities by those who fail to understand it. Or those who are intimidated by the passion it brings.

'It's just 22 people kicking a ball around', is the familiar refrain. And it is. Of course it is. We all know that.

It's not life and death.

In a pandemic where more than 1m people have died across the planet, to think anything otherwise would be churlish.

Yet, my word, believe me, sport, and football, and Arsenal does mean something more than just a game to so many people, on so many levels, for so many reasons.

And sport, and football, and Arsenal - to that happy band of true believers - is so much more than simply the game itself. Of course, the game matters. We kick every ball, we hurt when we lose, when we win we are joyous.

But it also brings meaning to many lives, and pain, and frustration, and anger, and disappointment, and hate, and fun, and laughter, and solidarity, and satisfaction, and joy - deep, deep joy on those rare occasions when everything aligns.

Which it did last night at the Emirates when fans returned

Because a matchday with supporters present makes a stadium come to life. It makes the surrounding areas hum with activity. Going to the game brings succor with its familiar matchday embrace, its rituals and rhythms, its camaraderie, a repast of familiar returning faces - a litany of well-known characters and their gentle ribbing or outlandish bandinage.

Fans are loyal creatures by their very nature. They mate with clubs for life. For better or worse, richer or poorer. In sickness and in health. In times of normality, or, when pandemics invade.

So, it was wonderful to see fans back last night. It was heartening to see old faces, friendships formed over decades of shared experiences.

It was fitting that Lacazette scored on the return.

The symbolism was heavy

As was the presence of checks to combat Covid, whether it be the detailed health forms fans had to fill in prior to the game, bag searches, as well as the temperature checks.

God forbid that any misguided souls got too near their neighbours in a perfectly symmetrical seating arrangement in the lower tiers. (And how nice was it to use the word tiers and refer to a sports stadium, not a measure of people’s freedom.)

But no-one minded the protocols. They were stringent but with a light touch. Even the stewards smiled. No-one complained, certainly not after everything we’ve all been through this year. No wonder a punter brought a banner proclaiming 'Arsenal 1-0 Covid'.

It was simply good to be back in the game

Songs were sung in communion. Fans, as fans do, baited the opposition supporters. Except, this was 2020, and there were no visiting fans. Never mind. Gooners ironically chanted: ‘You’re not singing anymore’ to the empty away end.

Jibes at Arsenal’s near neighbours – which may not seem as loud when the first team visit the league leaders in the North London derby on Sunday – were also sung lustily. It was that kind of night.

And Arsenal, despite, terrible league form, rose to the occasion. The team, appearing genuinely moved, applauded fans before kick-off, supporters, appreciating the gesture replied by singing their hearts out, amplifying noise levels inside the Emirates to fever pitch.

On the pitch, the team responded too, comfortably easing past Rapid Vienna in a dead rubber, in Europe’s second tier competition. (Another welcome use of the word tier that doesn’t involve coronavirus references).

Yet the match didn’t really matter. It was more about the matchday. It was simply good to be back.

For where else in life can you experience such highs and crushing lows – yet, that, in this age of Covid, take you far away from the despair and fear and banality of everyday life?

Of course there is still a long way to go. But we’re getting there, and hope is gradually returning.  Last night proved that.

On a long awaited matchday you could feel the sentiment inside and outside the Emirates last night.