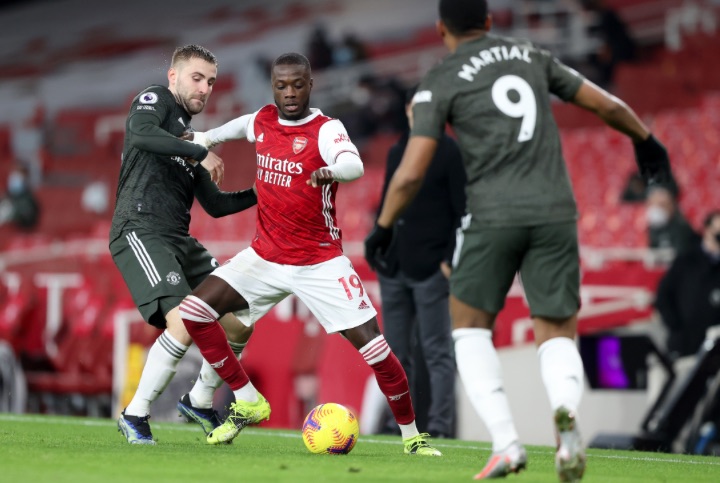 Here's what view on the Gunners clash with Manchester United at the Emirates on Saturday evening.

This game served up a classic example of how there’s a huge difference between results and performances in football.

During the last 30 minutes at the Emirates there were chances that could have won the game for both sides. Extremely fine margins that would have dictated the tone of this article – as much as I try to be balanced – and the mood of all Gooners on Sunday morning.

Had Edinson Cavani turned the ball towards goal following Luke Shaw’s cross, would we be all doom and gloom about the route we have taken since winning at home to Chelsea on Boxing Day?

Considering we had arguably our three best players missing, for me this performance was almost on a par with the 3-1 beating of the Blues.

If Emile Smith Rowe, Willian or Pepe took any one of the three best chances we had in the game would we be saying that all our problems are over and we’re the finished article?

That’s not me saying we were lucky to get a point, but overall in the circumstances I think we can say it was a good result. We allowed them two dominant passages of play midway through each half which we managed to limit the damage from.

Our defence has deservedly received plenty of plaudits in recent weeks, with our stats among the best in the division.

Gary Neville said an interesting thing in the Sky commentary, noting that it’s “still the same selection of ‘characters’ that we have seen make silly mistakes”.

He credited the coaching for making the sum of the parts better than the individuals, which is true to a point. I also think a huge amount of credit should be put Bernd Leno’s way.

Our undisputed number-one has pulled off some terrific saves in recent weeks to keep us in matches and his contribution cannot be easily overlooked.

He has really knuckled down considering the noise from fans regarding the Martinez departure could have knocked his stride a little. The way he swamped Rashford just before half-time was arguably better than any of the recent spectacular saves he has pulled off.

The absence of Saka and Tierney made us a little unbalanced on the left, but Cedric has been very useful in stepping in – on both sides of the four.

Rob Holding gave another no-nonsense performance and David Luiz rightly picked up the TV and Arsenal fans’ ‘man of the match’ double.

Elsewhere in the defence I still have real reservations about Hector Bellerin. On a few occasions he put us in trouble with wayward clearances, he was also easily muscled off the ball by Pogba to start a move that nearly led to a United opener. He really needs to strengthen up.

Thomas Partey had his worst game in an Arsenal shirt, but as I mentioned in midweek – a team will always have the odd non-performer in an eleven.

It’s how the others respond and raise themselves to cover that counts. It didn’t damage us too much, but he was uncharacteristically sloppy when recycling the ball after a decent first half-hour.

I pointed out his poor long-range shooting recently and although we didn’t sign him for that kind of thing I think he could do with forgetting that part of the game.

I thought Pepe was certainly in our best three or four players from the match, but again didn’t deliver a goal or an assist.

A lot is made of creative players (particularly wingers) that have to take risks and have the danger of giving the ball away.

One of the arguments surfaced in defence of players like that is the fact that often Barcelona’s sloppiest player in terms of turnovers is Lionel Messi. But surely that argument is shot down by his faultless stats in contributing to the score. Until Pepe does this with regularity then we can still have our doubts.

The result could have been different if only we had a tiny bit of luck with VAR.

I think it’s futile to argue against these things and I always believed they do even themselves out, but during this season I think we’ve been incredibly unlucky a few times.

We could arguably have had a penalty at Leeds which would have made the bad run a little more palatable in the history books. Then you look at the Fernandes decision yesterday where he clearly raked his studs down Xhaka’s leg. A proper review of that should have resulted in a red card – and then who knows what happens in the game?

The only other thing worse than fans moaning about referees is moaning about commentators and broadcasters, yet yesterday’s coverage on Sky was questionable to say the least.

Right from the opening credits focusing on the Sheff Utd defeat and United bouncing back, it hardly mentioned Arsenal and was almost like “we’re bringing you Manchester United’s next game”. It was incidental that we were the opposition at times.

So again, I’ll close in saying let’s be sensible and realistic with the expectations going forward.

We have a very trappy set of fixtures coming up and it would be wildly optimistic to say we can travel through them unbeaten.

I’m happy to take the rough with the smooth as long as we can see progress – and surely we can?