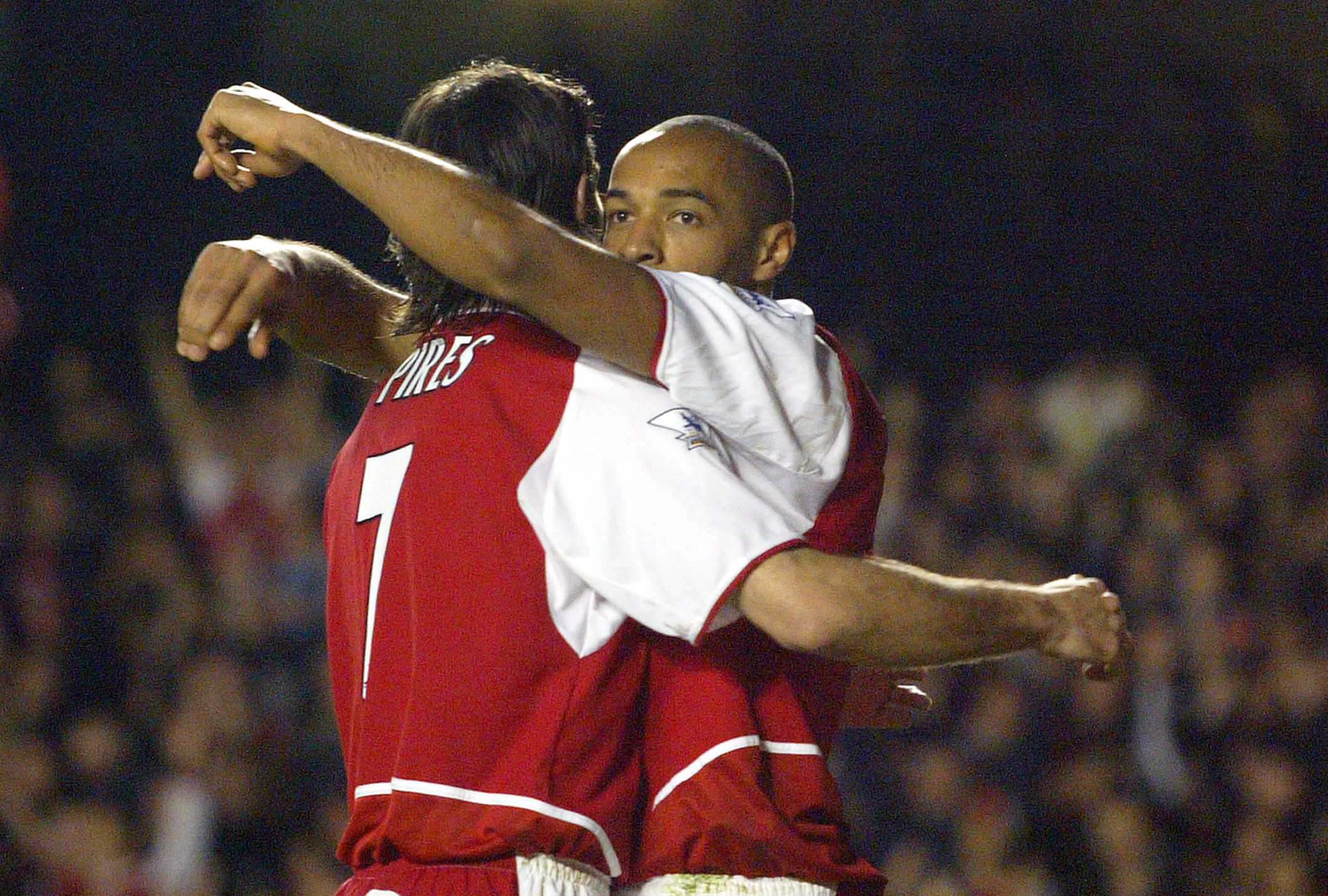 Thierry Henry pictured with Robert Pires after scoring for Arsenal against Leeds at Highbury on Friday, April 16, 2004.

Buy the Gooner Fanzine to read Dave Seager's take on all things Arsenal.

The Arsenal face a traditional old foe in Leeds United this weekend.

Amazingly this match will be the first league meeting between these two giants of English football at the Emirates.

This is because the Yorkshire Lilywhites were relegated from the Premier League in 2004 when were still at
Highbury, the season Arsenal won the division without losing a single match – in case you did not know.

There have been a few visits to Arsenal’s new North London home in the FA Cup, most famously the match often known affectionately as ‘The Return of the king’. No Arsenal fan will ever forget Thierry Henry’ first goal on his return to his spiritual home in 2012 and his incredible celebration and
touchline embrace with his old mentor, Arsene Wenger.

It was truly a night that will live long in the memory, and certainly, if you were fortunate to be in the stadium, to say ‘I was there’. Thankfully, I was, with my son Liam, a truly cherished memory.

However, there is another unforgettable match, starring the same striker, against the same opponents but in a different Stadium. With Arsenal’s season faltering, after exit from the FA Cup and Champions League in a matter of days,

Henry’s sensational hattrick at home to Liverpool had saved
his team’s unbeaten record in the Premier League and kept that campaign on track.

I would have to rely on the statisticians here but has an Arsenal striker before or since followed a hattrick one week with a foursome in the following match?

For that is exactly what the great man did, only seven days later and the unfortunate team to face the onslaught from an imperious TH14 was a beleaguered Leeds United.

Like so many matches in that marvellous league season Arsenal’s French balletic gazelle was unplayable, and of course brilliantly assisted by the familiar supporting cast led by Pire and Bergkamp.

On that afternoon, as I watched on with my son, both of us mesmerised by a master of his craft, it was actually the team’s unsung hero, Gilberto with two perfect through balls that Henry converted with his usual aplomb.

In those days, when he was put through, the outcome was virtually inevitable. These goals were his first and third, either side of a Panenka penalty coolly chipped past Leeds keeper, Paul Robinson.

Bobby Pires has opened the scoring early on, but the team’s fifth and Thierry’s fifth was a collector’s item.

Collecting the ball just inside the Leeds half Henry majestically carried the ball, with a typical burst of acceleration, between four helpless Leeds defenders, before again, for the third time that evening, sliding the ball under a despairing Robinson.

I seem to recall at least two of the Leeds back-line, and
certainly Gary Kelly trying to hack him down.

In all honestly in those days the best of defenders must
have felt that was the only way to stop him.

This fourth goal, on top of the three seven days earlier took his Premier League total for the season to 29, and of course left Arsenal, thanks to other results, able to win the league the next match at White Hart Lane.

It was this performance that again led to his manager describing his talisman as the world’s best striker.

Certainly, even though his French compatriot was never recognised as such, anyone watching the Leeds match that day and the Liverpool the week earlier would have been hard put to argue.

After the Leeds demolition Wenger was effusive: it's difficult to find each time new words for Thierry, Wenger said.

Rather than talking about him, it's better watching him. When the team is on the same wavelength, with his power and pace and skills, it is a joy to watch.”

It was a match to produly say: 'I was there'. There were many days like that back then.

It has taken Leeds United, 16 long years to return to the promised land of the Premier League. It is good to have such a historical club back and we can hopefully look forward to many fixtures between our two wonderful clubs.

Is it too much to also hope for another glorious Arsenal performance in 2021, even though I will not be
able to say, on this occasion, I was there.

Read Dave Seager in the print version of the Gooner Fanzine