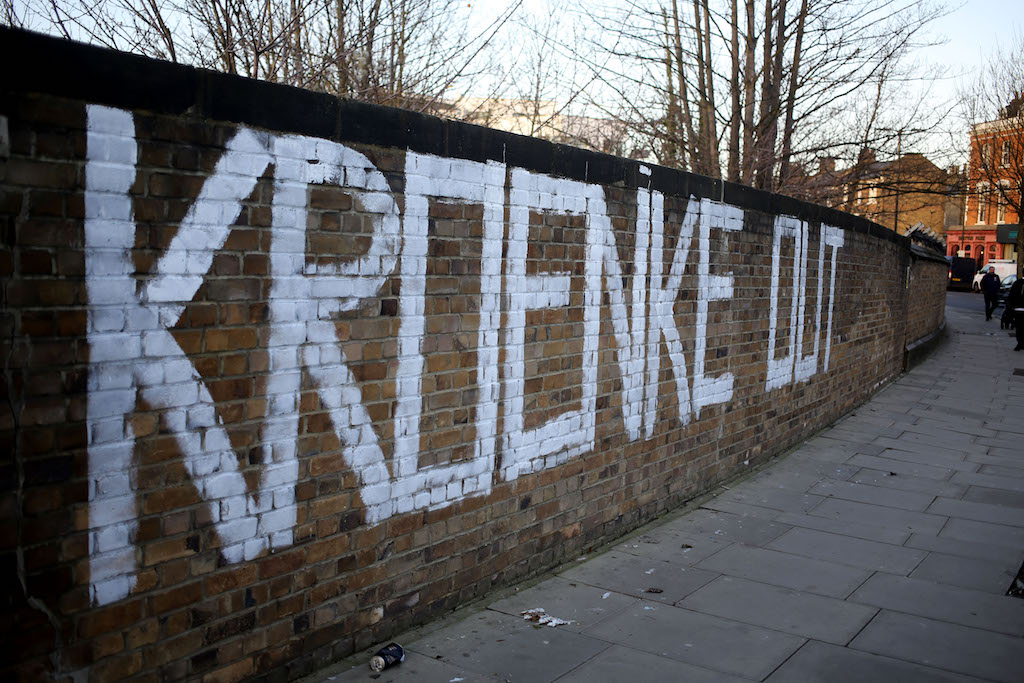 The Gooner Fanzine has had a sackful of correspondence this week about the  European Super League.

Thankfully supporter power and solidarity made the greedy bllionaires think again and their dreaful plans that would have changed football forever were soon abandoned under great pressure.

Arsenal apologised (although not Kroenke personally) but scars remain.

Here's loyal Gooner Adrian Bassett's moving piece on why and how he feel in love with The Arsneal in an open letter to Kroenke.

I’m not sure how it happened. It certainly wasn’t a geographical or family-related decision.

I have vague memories of seeing them on TV at a young and impressionable age sometime in the early 80s probably and being struck by that classic kit. What a kit.

It quickly became an obsession. I used to cut out all pictures, match reports and cuttings I could find and glue them in my scrapbooks.

I went to my first match in 1982 – when (on a whim I think), aneighbour took me to a north London derby no less (in the days when you could just turn up at the gate and get in). 2-0 to the Arsenal, in case you were wondering.

I think I got my first kit around the same time. That 82 home kit was another absolute classic, red shirt, white sleeves, white socks and red and blue striped socks.

Later, I became a Junior Gunner and I started to go more often, thanks to my friend Richard’s Dad,
Ken (RIP) who used to drive us up in his van, park somewhere in Highbury and then we’d walk to the
ground.

God, I loved those trips. Ken’s occasionally erratic driving was always offset by his tactical
summaries of the game and a trip to KFC on the way home.

We saw the start of the George Graham era, we saw some Arsenal greats come through the youth
system into the first team and we even saw some silverware.

At 17 and in my last year of Junior Gunner eligibility, I bought a cheap season ticket and saw every
single home game of the magnificent season where we only lost one game in the league.

As close to an unbeaten season as you could get – or so we thought.

I got my first student loan in 1994 and spent most of it travelling to Copenhagen for the European
Cup Winners Cup Final.

Thankfully, I thought better of going to Paris a year later.

My recollection of the summer of 1996 was that – presumably buoyed by summer of football –
Richard and I made a somewhat last-minute decision to phone the Arsenal box office and see if they
had any season tickets available.

At the time, the club was still reeling from the ignominious end of George Graham and the sacking of his replacement Bruce Rioch after just one season.

Optimism was low and the call was brief.

We went to Highbury and chose seats in the West Stand. A few weeks later Arsene Wenger was appointed manager and for the next ten years, we would see some of the most incredible moments you could ever wish to experience – including that unbeaten season.

Life revolved around the fixture list and life was good.

When Arsenal left Highbury, my credit card could take no more and it seemed like the right time for us to leave too.

My last match as an Arsenal season ticket holder was the Champions League Final in Paris. It was a painful way to bow out.

We left that magnificent ground with the promise of even better times ahead and since then, I’ve followed from afar – visiting occasionally.

Back in pre-Covid days you’d more likely find me behind the goal at New Lodge, home of Billericay Town than the Emirates Stadium.

The love for Arsenal was still very much there, but the passion had gone.

So when Arsene Wenger’s magic powers disappeared and the club ignored it, I shrugged.

When the American invested in the club, I tutted. When he took over the club altogether and took the shares
from supporters, I shook my head in disappointment.

When they advertised Rwanda on their sleeves, I was slightly irked.

When they made Gunnersaurus redundant, I probably made an involuntary noise.

But it’s not for me, Clive.

I like my big matches to be rare, because then they mean more.

I like that just occasionally, Leicester City can win the league and – even though the prospect is scarily real right now, I like the prospect that a poorly managed club can be relegated (hello, Leeds) and when they’re managed well again, they can come back (hello, Leeds).

I’ll always love you Arsenal, but if you need me, I’ll be somewhere else, probably Billericay.

The world will still turn and people will still go and watch Arsenal. Fans have always drifted away from their clubs for all sorts of reasons.

TV subscriptions will be purchased, fans will no doubt watch matches all over the world and replica shirts will be continue to be sold by the thousand.