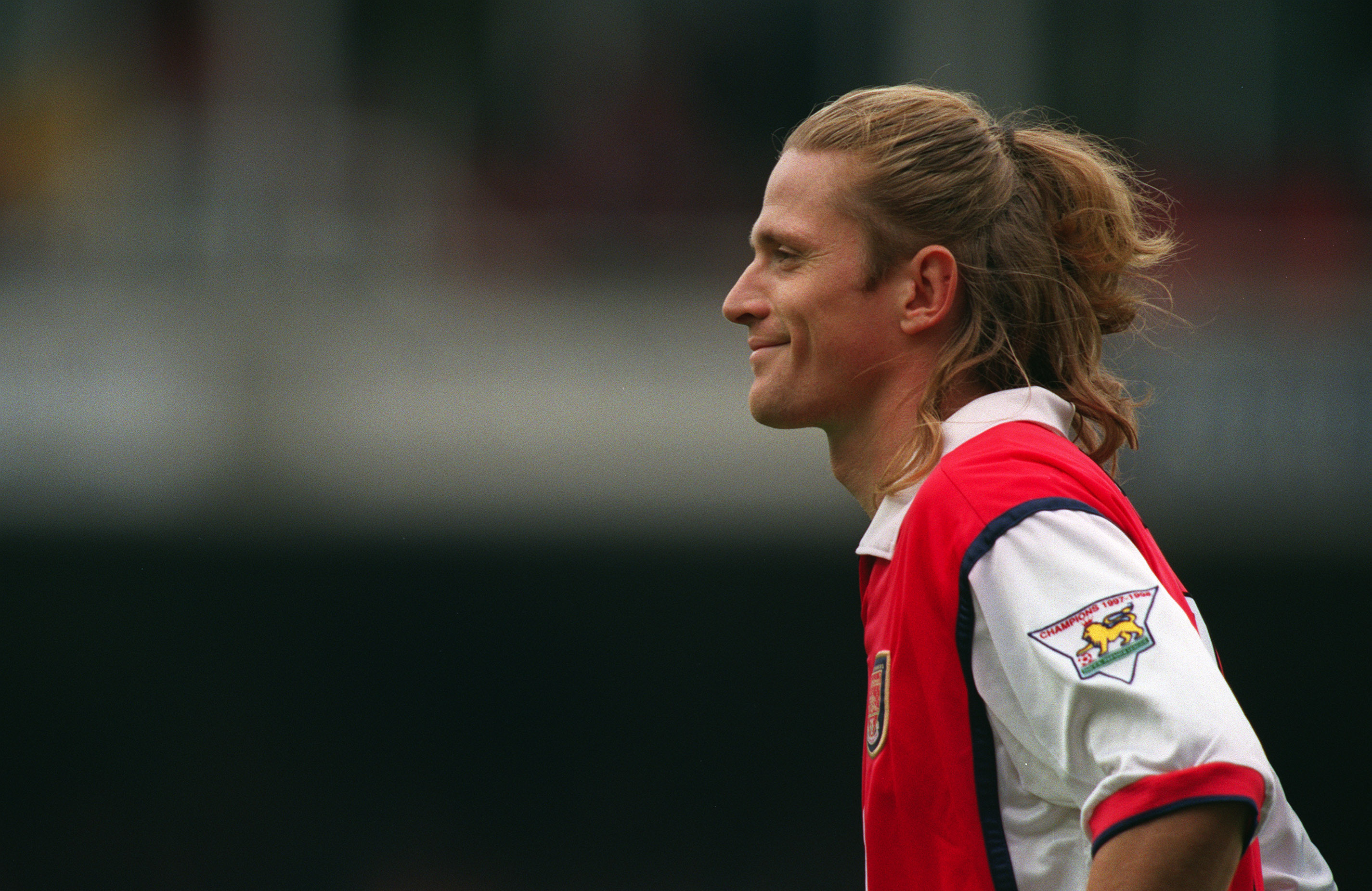 When Emmanuel Petit decided to take a cab from White Hart Lane to London Colney at the expense of would-be suitors Tottenham he had no idea it would cement his legend on the other side of north London before he had even kicked a ball, let alone become a double-winner.

“I didn’t know about the rivalry when I first arrived,” he tells The Gooner 24 years later. “I finished my meeting at White Hart Lane and they said, ‘We're gonna pay for your cab, you just have to give the driver the address.’ I told the driver to take me to London Colney.”

Petit went to David Dein’s house to meet the then chairman and Arsene Wenger - the manager who gave him his professional debut at Monaco while he was still a teenager.

Wenger, almost a year into his tenure at Highbury, convinced his fellow countryman to rejoin him at Arsenal on a three-year deal. “My relationship with Arsene was based on football but also the human being,” says Petit, speaking at the launch of the Paddy Park at Flat Iron Square, London.

“I loved his approach to diet, psychology and how he handled the dressing room when you suffered a defeat and felt the pressure from the fans.

“I learned so much with Wenger and I wanted to live that once more and I really appreciated the personality of Mr Dean.

“He was open-minded, always loving and tried to do the best for me. With Tottenham it was a bit cooler you know? It was not based around humans, it was only based on the contracts.”

This strictly business approach employed by Spurs feels a little closer to the modus operandi used by Arsenal’s current owners. An approach that has contributed to a bloated squad bereft of the spirit and talent that characterised Wenger’s most successful teams.

After a desperately disappointing season that included 13 defeats and an embarrassing bid to join the ill-fated European Super League, The Gooner sat down with Petit to reminisce about the good old days.

“Martin (Keown) was the favourite target of everyone - he was so easy, he was pissed off straightaway like this,” cackles Arsenal’s no.17, raising both his arms and clicking his fingers.

“He used to become so crazy.”

“And Ray (Parlour) the way he used to… nah, nah, nah,” Petit imitates a high-pitched child talking gibberish. “Every time he opened his mouth, I was laughing. I never understood exactly what he was saying, I was only concentrating on his tone.” The Frenchman gesticulates once more, this time like an Italian defender pleading his innocence to a referee following a borderline decapitation.

Then, we finally get to the answer of The Gooner’s original question: Did Ray Parlour threaten to cut off your ponytail because you were rude to your teammates when you first joined?

“The English players were a little bit pissed off because there were five or six French guys in the team at that moment and we weren’t speaking English so I can understand why they were upset,” he explains. “When you change your country, you need to adapt yourself to the culture and language -  it's important for communication on the pitch.”

Petit kept his ponytail, relationships were forged and the English fraternity started to appreciate what the French contingent brought to the team, none more so than the imperious duo patrolling the centre of midfield.

It was an engine-room armed to the teeth with athleticism, aggression, determination, technique and talent. A partnership that formed the foundations for Arsenal’s 1997-1998 double-winning campaign and disrupted Manchester United’s charge for a third successive title.

Petit explains the balance behind their perfect symbiosis both on and off the pitch. “Patrick (Vieira) was right-footed, I was left-footed,” he says. “He used to run with the ball from the midfield area, I used to play the long ball, we complemented each other, but apart from that, we had the same desire.

“Our relationship was based on trust and honesty. Patrick is like a brother to me. He can ask me whatever he wants and I’ll be there for him - our relationship has lasted beyond retirement.

“Our families spent two days together last summer, we were talking about football and life - our kids, our wives, our targets - when you have this feeling for a teammate off the pitch, you have something special when you arrive on it.

“I knew that if I went somewhere on the pitch he would have been behind me, supporting me and it was the same for him.

“It's not based on winning titles together, it’s based on human beings and that’s why we could have played together blindfolded.”

The third goal in the 1998 World Cup final symbolized this connection. In the 93rd minute, with France leading Brazil 2-0 on home soil, Les Bleus launched a counter-attack. Christophe Dugarry carried the ball deep into Brazil’s half before finding Vieira who had drifted out to left.

Petit strode through the centre of the pitch beyond Cafu and Carlos Dunga and Vieira found him with a perfectly weighted pass. Petit sealed victory with a first time finish past Claudio Taffarel before running into the arms of his Arsenal compatriot for an emotional embrace.

Petit returned to Arsenal with Vieira that summer, but left for Barcelona two years later with another team-mate Marc Overmars, having never added to his trophy haul in England.

The offer of a better deal and the chance to play for one of the biggest clubs in world football was an opportunity that couldn’t be ignored after winning Euro 2000 with France.

A single season in Spain was marred by injury and Lorenzo Serra Ferrer’s decision to move Peit back into defence. The Frenchman returned to the Premier League in 2001, joining Arsenal’s London rivals, Chelsea.

Time hasn’t healed the wounds of leaving Arsene, Patrick and Ray behind 21 years ago. “If I could go back, I would have never signed for Barcelona,” he admits. “To play for that club was a huge honour, but I never would have imagined what happened to me, it's something I really don’t like.

“When I left Arsenal, I knew I was missing them a lot. I'm pretty sure that Patrick was very upset when he heard that I was leaving the club, but after that they were Invincible.

“I was watching them and thinking, ‘I could have been a part of that’, but then I had to forget it and move on and I was happy for the players and the club.”

Given the current state of Arsenal’s central midfield, Mikel Arteta could do worse than signing a 50-year-old Petit to police the back four and launch attacks with his surgically precise left-foot.

The Gooner asks if he’s ready to make a sensational comeback? “I'm too old for that,” he laughs, unable to hide the desire of a man who would love nothing more than to pull on the famous red and white one more time.

Emmanuel Petit was speaking at the launch of the Paddy Parks, the ultimate fan viewing experience for all EURO 2020 games. Held at Flat Iron Square and Riverside Newcastle, tickets will sell out fast – visit www.paddyparkfanzones.comto book your spot.