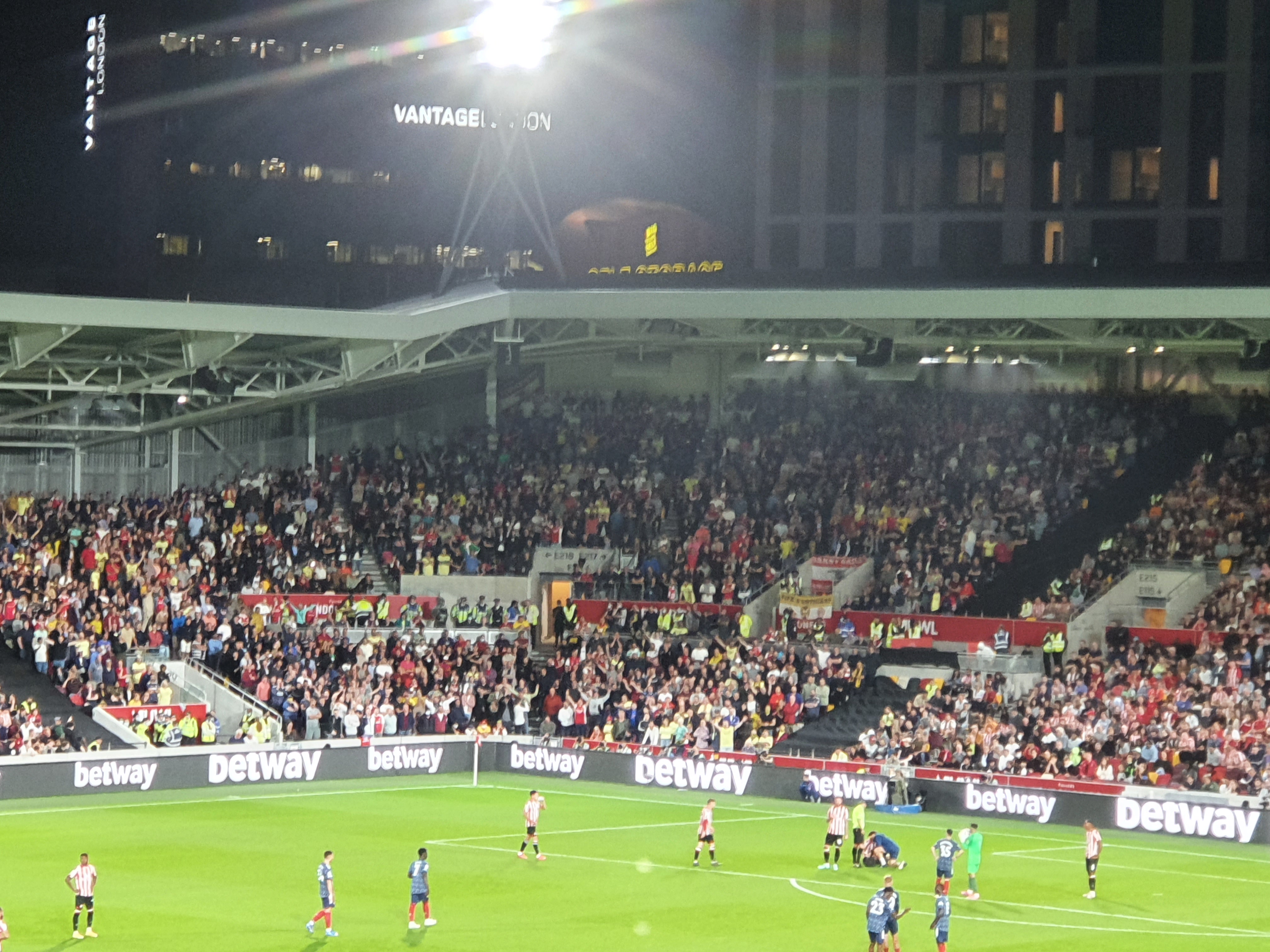 The loyal Arsenal supporters in the away end at Brentford. CREDIT @laythy29

Ahead of this match there was a weird kind of calm within the fanbase.

It seemed that writers on this site, guests on various podcasts and even a majority on social media were tempting Mikel Arteta’s team to surprise us.

Previewing the season holding out hope of anything in the area of a 5thto 7th place finish.

A bar set low enough to suggest improvement from 8th and also to spark wild celebrations if a miracle of ‘top four’ could be achieved.

This expectation consensus felt rather good, a foundation if you will. Almost like collectively saying “we’re now fully aware of the levels within this squad, we’ll be supportive, but you can’t surprise us anymore”.

Well it was nice while it lasted...

We couldn’t even get to kick-off of the season opener in west London before the suspicious team news and wild rumours suggested we were in for another long night – or possibly a very long and painful nine and a half months.

The optimistic takes on the absences of Aubameyang and Lacazette included the very plausible – ‘at least we’ll now see the depth of our forward options’ and ‘this adversity might lead to uncovering another Smith-Rowe type solution similar to last Christmas’.

Arsenal’s social team did not help the cause by posting the shirts of the chosen front three – Martinelli, Balogun and Pepe – along with the caption ‘Deadly’.

Shots on target from that trio = 1. Deadly indeed.

It was clear that Brentford’s players and fans would be heavily pumped up for this long awaited return to the top-flight and I actually think we handled that early buzz reasonably well.

For ten minutes we stifled their energetic approach and as the clock clicked into double-digits the home crowd had lowered the decibels.

For some reason we then took our foot off the gas and allowed Brentford to build the buzz back up again. The rondo style intensity of our own passing can sometimes look panicked and without structure, especially at the back. Any half-decent opposition scouting of us in the Arteta era would have an educated press right at the top of the suggested tactics to thwart us.

Did we pay Brentford’s set up enough respect in that regard? As someone employed in the betting industry I’m fully aware of their ownership (Google Matthew Benham) and methods, their scouting of both players and opposition is among the best in European football.

The opening goal was the usual comedy of errors, but we should also highlight that it’s highly likely the ball was out in the second phase of play before they scored.

While Sky said the replays were inconclusive I’ve seen stills of the incident which match the whole of the ball with the lines of boots of two of the players clearly off the pitch.

I wrote last season that whatever Arteta goes on to achieve in his time at the club he could already be classed as one of our unluckiest managers in our history.

He’s definitely had a hugely disproportionate slice of bad luck and bad refereeing decisions during his tenure. That said, this excuse or reason would weigh far heavier if he got the things he can influence under his control.

The officials miss the ball being out of play, yes. But a defender gets drawn out of the backline for a ball he can’t win, that then leaves a defensive midfielder to make a desperate challenge in the box, the rest of the defence are out of shape and then don’t deal with a threat progressing into the area with the ball. Finally our keeper gets beaten at his near post.

Over 80% of that above passage of play rests with the manager and his squad. The very least a boss can do is control the controllables!

The remainder of the first half was woeful and not only did we look shocked by going behind we then didn’t offer any positives to suggest we could find our way back into the game.

There were more shaky passes prompted by the hosts press. Every attack was missing a decent final ball.

One hope you have with Arsenal in the last few seasons is that we rarely put two halves of football together with the same levels in a match.

A bad first half has quite often been followed by a superb second half during this last decade or so of inconsistency.

There was a little bit of hope that Smith-Rowe had found his groove and it would be a matter of time before an equaliser. It wasn’t a case of Brentford holding what they have either, they were backs to the wall at certain points.

That’s faint praise though, because a club of our size and with our resources should be causing a newly promoted team issues more than ‘at certain points’.

And when you mention clubs that are new to the division, the Bees become the first team to win on their first game back in four years and only the third in eight seasons. We’ve gifted them a rare dream start.

That dream start was confirmed with a second goal that was rightly described as ‘same old Arsenal’ by the commentary team. Failing to attack or claim a ball flung into the danger area.

The replays show shirking, squirming and a worryingly relaxed attitude to being first to loose balls one, two and three. Leno and the defence once again at fault, although the German may have been fouled. In that situation you need to make it clearer to the ref or just fight through it and be stronger. He did neither.

Another thing to stick on the ‘bad luck’ bill along with a potential first-half penalty that falls firmly into the ‘seen them given’ category.

One reading of the bare match stats suggests that 22 shots and a hefty possession percentage of 65 means this was an acceptable performance.

But the shots weren’t of any real quality and when we had the ball we didn’t make the right use of it. See the numerous stills floating around Twitter for evidence of poor decision making in the final third.

The lack of European football means that Arteta has more time to work on improvements this season, although it would be entirely fair to doubt he’s capable of achieving many.

More worrying for him is that his opposite number in game one, Thomas Frank, sent a clear message regarding how we’re going to be perceived this campaign.

The Dane claiming in his post-match interviews “I just had the feeling I would be really disappointed if we didn't beat them”. Those alarm bells haven’t stopped ringing.

Arteta has now fallen into an almost hopeless and sympathetic external view that the next two league games against Chelsea and Man City are freebies because nobody expects us to take anything from them anyway.

He’s in the dangerous ground of ‘small club’ talk, and while he’s not solely to blame for where we are – with a decade long list of suspects – he cannot afford for that to be his legacy.

P.S. Those scenes at Brentford between their players, young fans and manager are what it’s all about. Just wish we could have enjoyed them as neutrals rather than defeated opposition!