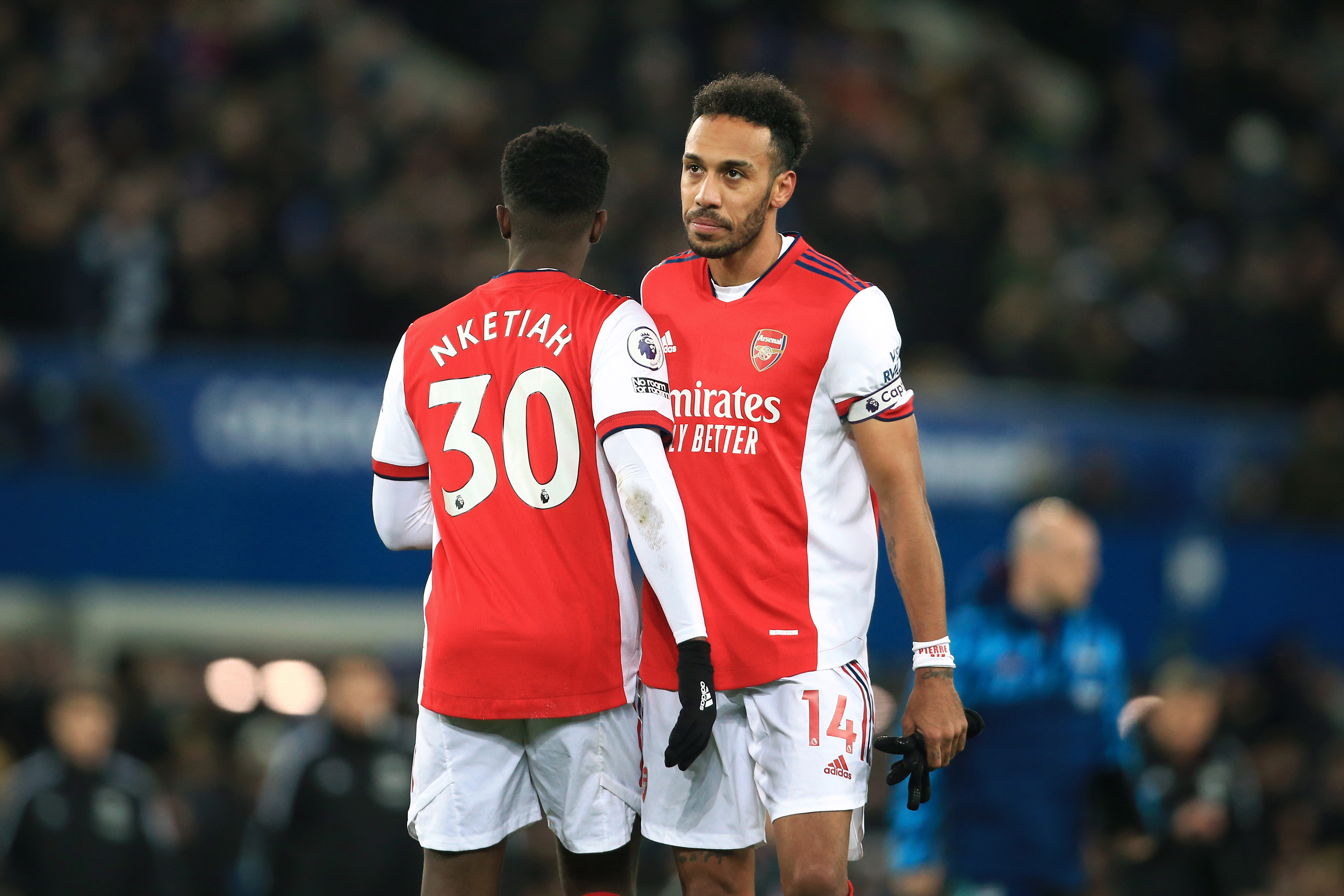 Arsenal lost 2-1 to Everton on Monday evening, the club's third defeat in their last four matches

Another disappointing result following on from the defeat up at Manchester United, oh how Arsenal Twitter are going to be going mental over this one.

I can already see the deranged eye bulging over the top reactions within minutes of the final whistle going - so hear me out because I don’t think you’re gonna like what I have to say.

I certainly feel like the only mug punter on the planet at the moment who is prepared to hold his hands up and say we got what we came for.

I can’t honestly say hand on heart that we deserved anything less than what we got.

Even if we had 64% possession in that game, hard as that is to believe, well those are the stats that popped up at the end of the match on the screen at any rate.

Ten attempts with three being on target compared to Everton’s 11 plays five - but stats don’t always tell the whole story do they?

Quite rightly the sensible informed opinion that I am seeing in the online murmurings would say that the performance was not good enough, and I can certainly agree with that.

When you have been reared on the caviar and free flowing champagne football of an Arsenal team featuring Henry, Pires and Dennis Bergkamp, certainly what we witnessed by Mikel Arteta's Arsenal side Goodison Park was no good at all.

But for those of us of a certain age who are able to cast our minds back a little bit further, who can remember the football that was served up under George Graham’s teams?

Going into the break ahead with an opportunistic goal scored by Odegard right on the stroke of half time, should have set us up to come away from Goodison with a comfortable 1-0 win all day long.

Sadly this team resembles neither, it felt to me that once we gained the lead, mentally we were stuck in no mans land - should we push for a second or shall we stick with what we have in the bank?

We tried to defend the 1-0 lead we gained - but tactically if that’s going to be the modus operandi, when that ball is in Ramsdale’s hands, I want to see the ball hoofed as far up the pitch as is possible, not once not twice but every time, and if Lacazette is either unwilling or unable to bring the ball down and control it, we are going to need to buy a target man who can.

But I doubt that is going to be the way forward for Arsenal and I highly doubt that Arsenal Twitter would be delighted if we bought in Sam Allardyce from the cold to replace Arteta and bring that style of play back into our game.

So here we are, what to make of that performance?

Call me naive, call me tactically Inept, call me clueless but here’s what I saw.

We got beat by a screamer, a peach of a shot which flew past our keeper - before he even had a chance to contemplate whether to dive for it or not, in the last minute of normal play no less.

Everton had two goals chalked off for offside, both scored by Richarlison, both of them called correctly, both of them given by Mike Dean that ever so impartial ref who just loves to officiate an Arsenal game when he gets the opportunity to do so.

Richarlison did eventually get his reward with the equaliser - just around the time I was posting on Twitter that we were definitely going to be needing a second goal if we were going to get anything from this game - you could sense it was coming.

But that last minute screamer was a tough one to take, cutting inside past a stranded Ben White before unleashing a ferocious shot that flew past the keeper crashing into the onion bag off the post to the delight of the Everton faithful.

Can we really say they didn’t deserve to win it?

Is it a disgrace to be Losing to Everton away?

If the barometer is Arsenal teams from days gone by then yes, but it’s just another health check as far as I can see on the long road back to glory.

It’s gonna be a tough road for sure, I feel really sorry for the fans who made the long trip up north, it was chilly in my house with the heating on let alone being on a windy wet Merseyside on a Monday night.

If anyone has grounds for complaint it’s those unsung heroes, but for your average armchair muppet like myself I plead with you, now more than ever is not the time to pile in.

It’s a young team, the writing is pretty much on the wall for any title hopes and aspirations anyone might have been secretly romantically dreaming of.

If it wasn’t for VAR we might possibly have been coming away from there on the wrong end of a 4-1 thrashing - and we might well have had grounds to be calling for heads on spikes.

But as it stands, being beaten, by that peach of a goal, sometimes you just got to accept that the footballing gods have other plans in store for you.

Unfortunately, what they are, I don’t really know.

We have pulled Nottingham Forest in the FA Cup, a chance to exact some revenge, and as things stand, maybe it’s time to readjust our goals, aim for 4th at best in the league - and try our best to aim for a day out at a sunny packed Wembley and a chance to add another FA Cup in the cabinet.

I know I would happily take that as a successful season at the moment feeling the way I do right now.

A word on that Everton 'protest'

Last word I want to add, my goodness, that demonstration or protest on 27 minutes from the Everton fans?

What was that all about?

You leave your seat, having paid full value for it, head down to the concourse, presumably to buy a beer, maybe an overpriced pie, and that presumably is going to have Farhad Moshiri quaking in his thespian boots is it?

Come on do me a favour, please, you really have to try harder than that.

If you want to protest there’s only way for you to get him or any other chairman in the Premier League to understand.

You vote with your feet properly, you don’t go, at all, you don’t buy your season ticket, nor the shirt nor the programme - nothing.

It’s the only language they understand and it’s the only way you can truly register your disgust, if you do so feel the need.

More than ever, I am calling on you, the match attending punter, to get behind the boys, put this result firmly behind you, it’s done, it’s over, turn off your internet TV channels, don’t give them the clicks and the views they will be happily licking their lips over, sh*t happens, we saw it happen at Goodison.

Just got to get on with it, get behind the boys, save for a rainy day and hope the weathers better next time.

PS Respect to the gooners who made that trip. COYG