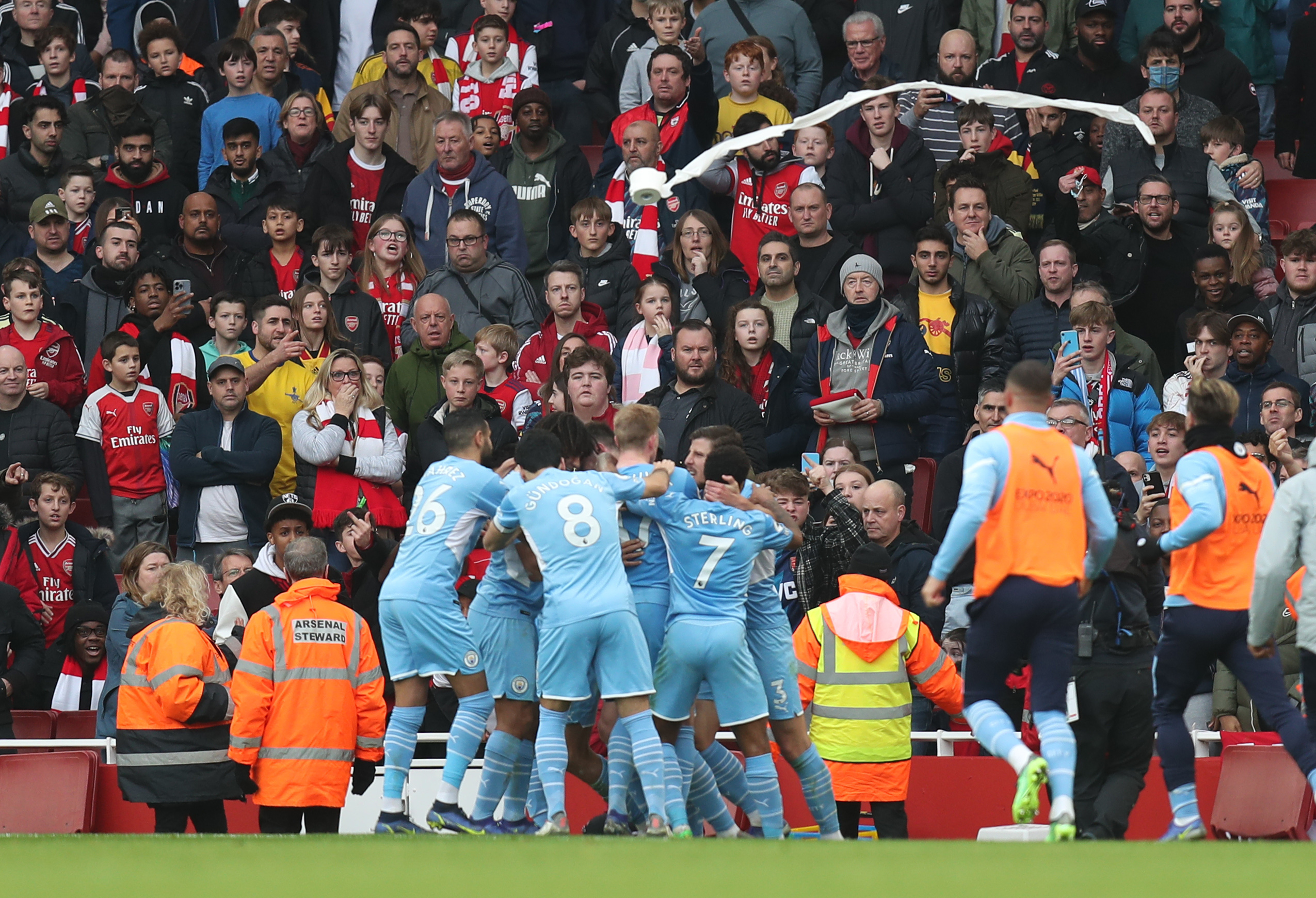 What a heartbreaking way to start 2022.

A game in which I couldn’t see us getting anything more than a point, and we’ve all come out absolutely gutted that we didn’t get all three.

Farcical, inconsistent refereeing again ruining the game - as it has on so many other occasions this year.

VAR is proving to provide more questions than answers.

Those decisions and the consequent result has outshone the main takeaway from that game - Arsenal went toe to toe with the best team in Europe whilst the game was fair, and even completely outplayed them.

We are getting there, and much quicker than anyone thought we would. I’m actually going to have to take at least five hours before I carry on writing this, my head has gone. I hate football sometimes.

Okay, I’ve taken a few hours and I feel ready(ish).

This is the first time this season where writing a piece feels like a real slog.

I’m still hurting, as are most, but an overwhelming feeling of pride is starting to protrude. From where we were at the start of the season, and last season, this side is unrecognisable. One that we now know can go toe to toe with the best. Arteta’s ‘process’ is speeding up and really taking shape now.

The atmosphere inside the ground prior to kick off was electric. The fans were very much up for it, as they have been throughout this season. New Year's Day at 1230pm, who allowed that?

Bad enough for me and I love 10 minutes away, I can’t imagine what those City fans felt like. Both sets of fans turned up in large numbers though. Those in red and white knew that they would have to make the Emirates somewhat intimidating in order to thwart the steamrolling train of Man City. For 45 minutes, they did. The team, the crowd, the coaches. 45 minutes of complete defiance when faced with perhaps the most challenging opposition of all.

City started in their usual fashion, probing with intent. De Bruyne and Bernardo Silva picked up pockets and scanned for openings, of which there were unusually few.

The Gunners then grew into the game - the fearlessness of this young side coming to fruition in ways that, given the opposition and the result four months ago, were previously unimaginable.

Martinelli ran rings around the best LB in the world. Ø and Partey picked locks with satisfying ease. Tierney and Tomiyasu camped out in the City half. Bukayo Saka, well what to say about Saka.

It felt as if Ronaldinho was facing Mustafi. You can tell a player has it when the crowd immediately get on their feet when they are on the ball. We have two of them in our team. Like Henry and Anelka (if they played together on opposite flanks).

For all our dominance, a goal deserted us for the opening 30 minutes. Many a good move, with no end product - although there arguably should have been when Ø was brought down by Ederson, infuriatingly not warranting a second look from the referee. Anyway, the goal did come.

A move that we have become accustomed to provided the opening, although this time it was against the team that do it better than everyone else.

The ball spread to Tierney, who then cut it smartly inside to Saka who then swept home. A fantastic goal.

It weirdly reminded me of Martin Tyler shouting “A Barcelona goal, from Arsenal” as Arshavin made it 2-1 at the Emirates.

It makes it special when you do it against the team that showed everyone else the blueprint of how to. Saka sent the Emirates into bedlam. Arsenal then pressed on.

Another sweeping move led to Martinelli curling one just over the bar, before he then went marauding down the left again, this time squeaking an effort just past the post.

It could’ve been 3-0 at half time, and we would’ve been good value. Arsenal went off to rapturous applause in the cauldron of noise that the Emirates has now become.

Man City didn’t know how good this Arsenal side really are and, to be honest, until today neither did we.

This Arsenal side can compete with the best. What’s really exciting is that since Arteta got his first XI together, it hasn’t taken him long.

This was the performance against a big side that Arsenal fans so desired (and knew we were capable of), at least it was for 45 minutes.

The second half kicked off in similar fashion. Manchester City were prevented from coming at us.

We again went to camp in their half, and probed again.

In the 57th minute on a rarely dangerous foray forward for City, the game completely changed. Bernardo Silva ran into Xhaka, who pulled on the sky blue shirt.

Despite initially being waved away as the dive, the referee went over to the screen and overturned the decision.

This one warranted a look, but Ø’s didn’t? Yes Xhaka gave the referee an excuse to give the penalty, but should he really be looking that hard for this excuse, and if he is looking, then why not look at Ø?

Consistency is all we ask for, and it’s the last thing we’re getting.

The problem is not with VAR though, it’s with the organisation and officials that control it.

Why is it that the so-called ‘best league in the world’ can’t use a technology that the World Cup, Euros and the Champions League have all implemented in an infinitely less frustrating manner.

Something has to change, and soon. Too many games this season have been ruined by the officiating.

Mahrez tucked away the penalty, 1-1. Completely undeserved. The game then fired up. Gabriel was booked for dissent in the penalty aftermath. Saka was booked soon after.

A moment of madness from Laporte though provided Arsenal with an absolute gift of a chance to retake the lead.

Ake slid to save Laporte’s blushes, before Martinelli hit the outside of the post in front of an open goal. Another game changing moment.

A minute later Ederson found the chest of Jesus who took it past Gabriel and was brought down. A stupid challenge, but did it warrant a yellow?

Maybe, but not given the events five minutes before. Gabriel walked, and a ten man Arsenal now had to hold on for 30 minutes.

Unbelievably, hold on we did. Resolute and organised, Arsenal thwarted any City attempts to unpick Arsenal’s locks. In the 92nd minute this defiance was broken.

The ball ricocheted to Rodri who poked home before choosing to celebrate with the Arsenal fans instead of the travelling supporters closest to him.

The wild celebrations though, and the nature of the victory are marks of just how far this Arsenal team has come.

Four months ago, a 5-0 battering at the Etihad in one of the most dispiriting Arsenal performances I have seen, but today Arsenal went toe to toe, and outplayed Manchester City.

The Arsenal crowd clearly recognised this progress, and made sure that the Arsenal players were greeted with the same rousing show of support at full time as they received at half time. There were red bodies strewn across the pitch, all equally heartbroken.

To come away with nothing is absolutely inexplicable, but Arsenal showed the league what they could do today - and the pride of the fans at FT was recognition of this.

Instead of being in the ‘process’ of building something, there is something built here. Something is happening at Arsenal, and it’s unlike anything I’ve seen in my lifetime.

My Dad recalls 1986, with Rocky, Micky and Merse. Three years away from winning the league but fun and excitement on the way.

The Spuds await in what is probably the biggest game of the season so far. We may lose, but we’re undeniably a better team.