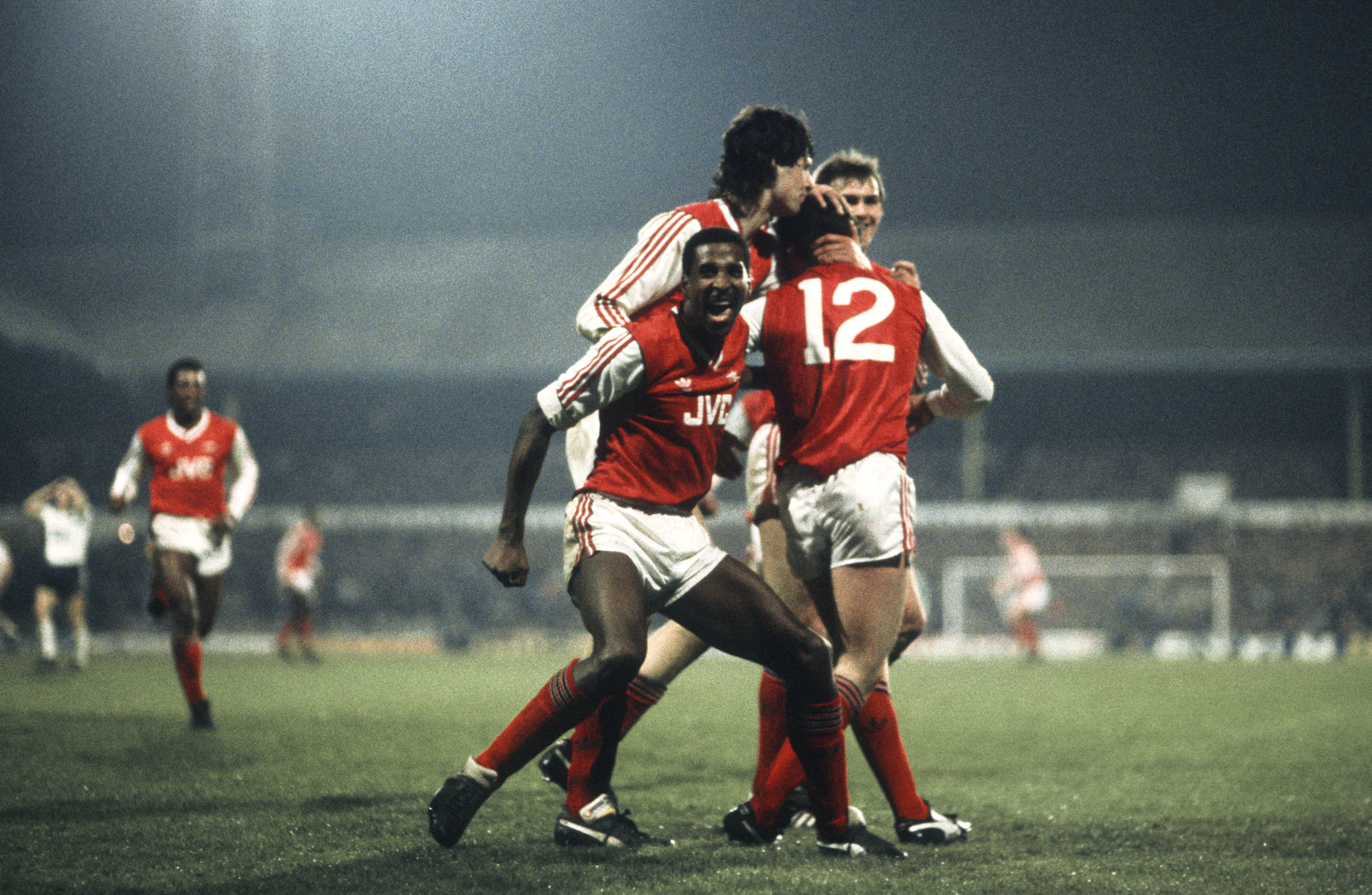 Let’s go back to the age of the young guns! A time of blitzkrieg football of fire and steel: this is George Graham; this is the wonder years!

In 1986 a new, exciting band of brothers was emerging from a half light of middling mediocrity into the full glare of dream-filled expectation.

When Graham and his much loved sidekick, Theo Foley, began dressing their team in a livery of resilience, energy, togetherness, and collective pride none of us knew quite what lay ahead, but had we have seen the future we would have recognised it as being as one with what we started to see in 86/87; for ’89 became the ultimate flowering of those green shoots of 1986.

The qualities were all there, an indomitable spirit of ‘we are the Arsenal’ informed almost everything that team did: and we were lucky enough to see the first true flowering of that spirit in a series of games in early 1987.

They became recognised as a joy in themselves but now can justly be seen as the birth of a team. Three games of twists and turns, which showcased much of the best of football back then and likewise, highlighted some of what the modern game has lost in comparison? It was a very private battle played out before a fascinated nation, and its conclusion, the stuff of myth and legend is one now forever associated with one of our lost sons, a young man who epitomised all the qualities with which that collective has become forever recognised.

On February 8, 1987, Arsenal met Tottenham in the first leg of the League Cup semi-final. It was a re-run of the double legged contest at the same stage of the competition from 1968, a tight, hard-fought affair the Gunners won 2-1 on aggregate. This affair promised to be every bit as tight and every bit as hard fought: it didn’t disappoint.

Arsenal went into the game on the back of taking the season by storm, an unbeaten run of 22 games in all competitions had only just come to an end following an acrimonious and dubiously refereed contest at Old Trafford, when United won 2-0, Rocastle received his marching orders, and the die was cast for the tone of the games between the two sides for the next twenty years.

It felt like Arsenal had been top for ages, and besides the League Cup semi-final, they had also advanced to the 5th round of the FA Cup, where Barnsley awaited them.

Part of that 22 match unbeaten run was a late Christmas present of a 2-1 victory at White Hart Lane, an afternoon when Arsenal unleashed the cavalry, and in the eyes of the nation became transformed from pretenders to authentic challengers in the mud beneath a rain soaked and lowering sky.

Indeed, top spot had only been relinquished, the day before this first leg contest, for the first time since early November, when Everton defeated Coventry City 3-1.

That previous day had marked a personal triumph for a young bean pole of a defender at the club too! Tony Adams had just been named in an England squad for the first time, a game away in Spain which England would win convincingly 4-2, when ‘big Tone’ would make an assured and commanding debut!

Arsenal have always majored in doing it the hard way, so it was perhaps only to be expected that things would get off on a difficult footing. In a taut game of condensed space and no time, the ball largely ricocheted around the midfield area until Allen poached a disputed goal out of nothing: Graham said afterwards, ‘there were two players offside!’

Arsenal rallied late on, a period of pressure which only really had Perry Groves’ shot against the woodwork in the 74th minute to show for it, came to nothing. Afterwards, Graham was philosophical. He wasn’t unhappy with Arsenal’s overall performance he said. It was a setback but the tie was still there for the winning.

Going into that second leg, March 1, Arsenal felt on the back foot, for the first time in a while. Speaking before the game, Foley lamented the absence of Steve Williams, an issue which would result in a slight change of shape.

Arsenal though would welcome back Viv Anderson, and David Rocastle, both of whom had been suspended for the first leg. While the big issue remained: would Graham bring back Charlie Nicholas with Arsenal needing goals on a ground which historically had proved to be a happy hunting ground for the Scottish international: Arsenal’s boss was keeping his cards close to his chest though and kept us all guessing.

As things turned out 16 minutes into the second leg Arsenal needed his goal threat even more keenly, with another strike from Allen putting the hosts two up on aggregate.

Allow me a Shakespearian quote: ‘there is a time in the lives of men, when events, if taken at the flood, can lead onto greatness’: now was just such a moment when Arsenal grew almost out of themselves when a trickle became a flood.

Whatever is a team? It is what Arsenal became that afternoon, when an intangible yet irresistible force field becomes discernible: it is there in a sense of connection, belief, focus, and indomitability that separates the worthy from the winner. Arsenal came of age that afternoon as Mickey Thomas, Paul Davis, and David Rocastle began to dominate the midfield.

The press captured their performance with words like ‘courageous’, ‘energy’, ‘fierce’ as they slowly but surely cowed the more experienced Hoddle and Ardiles. One paper commented that by half time, ‘Davis had made Hoddle look like a tired old man’. And yet there was still work to do, a two goal deficit remained regardless of Arsenal’s bravery and fortitude.

Within a few minutes of the restart the game was turned on its head. Buoyed by a string of half chances towards the conclusion of the first half – Nicholas hit the bar, and Rocastle drew a great save from Clemence – Arsenal pressed strongly.

After 51 minutes, a good old-fashioned flick on from Niall Quinn was latched onto by Viv Anderson to pull one back for the visitors. Then in an end-to-end burst of frantic cup football, a man who encapsulates the consistent, unsung heroism of that team, ‘keeper John Lukic made two brilliant stops to keep out Allen and Waddle as Arsenal threw cation to the wind. The madcap momentum continued, and on 65 minutes a cross from Rocastle was converted by big Quinn – all square!

Despite Arsenal’s increasing control over the game, they couldn’t force a decisive winner. Although they hadn’t yet claimed their spot at Wembley, they had certainly claimed the momentum; the dam was straining with a deluge looking on the cards.

The following morning’s papers were full of Arsenal’s strength of character: ‘Arsenal’s youngsters threw themselves into the fray with an enthusiasm which bodes well for the replay’.

Following a toss-up to decide the location, Pleat called right, but no worries, Arsenal had gone to White Hart Lane twice in the space of eight weeks and triumphed.

We would walk in again like a conquering army, heads high, and now crucially with a fully grown belief and self-assurance to call upon, something which would continue to carry the team on to glory over the next few years.

The story of the Graham era is a real-life Boys’ Own tale, and this was merely a prelude. On the March 4, three days later, the Gunners would complete the first chapter on one of the great nights of English cup football; a rollicking evening of the most intoxicating atmosphere contained within four sheer walls of noise.

It was the kind of night which lies beyond the ability of words to capture, but that is for next time, this was enough, a mud splattered gang of young mates had triumphed and in so doing had announced, loud and clear, Arsenal was back!