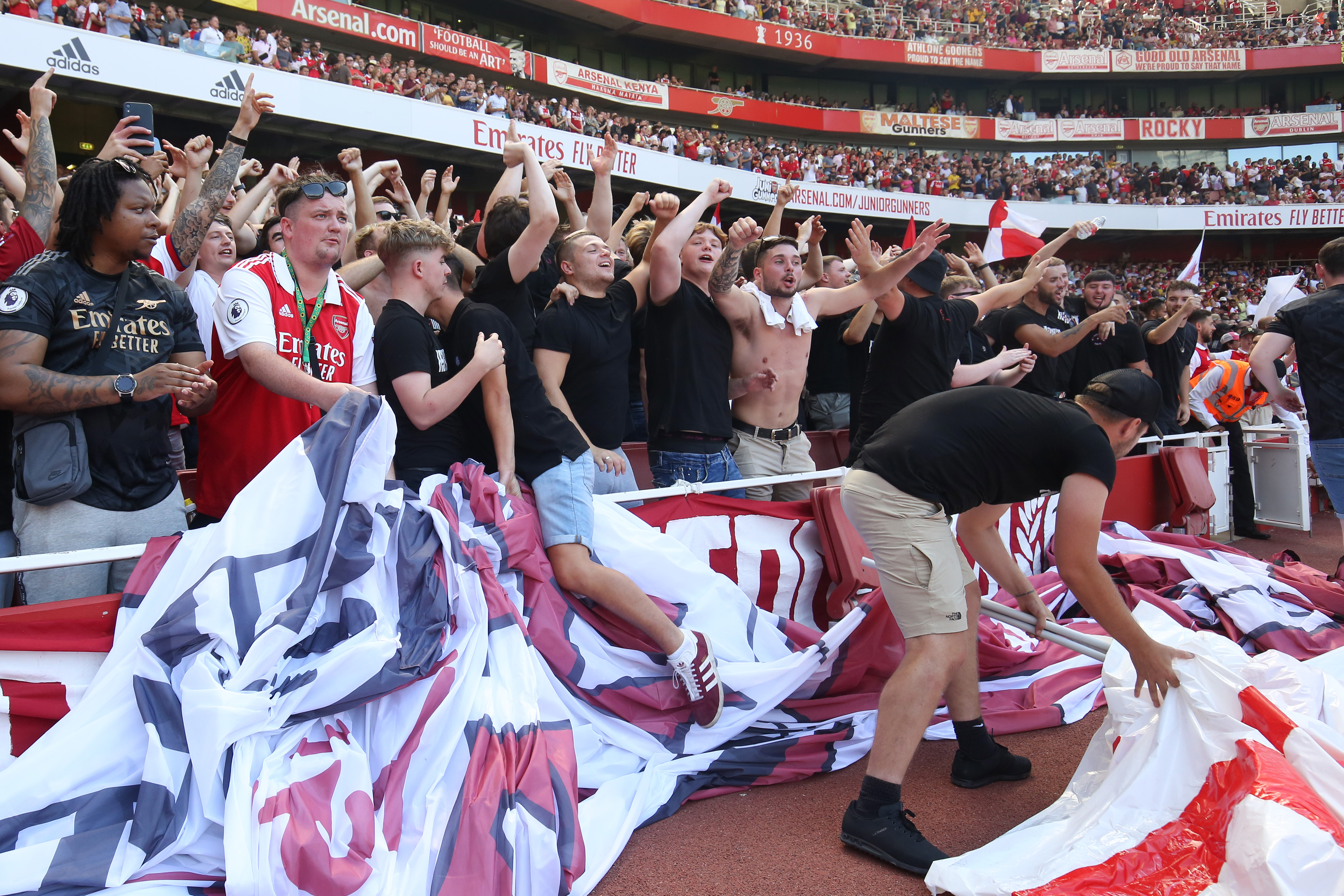 Ian Jenkinson analyses the difference between fans in the stadium and fans on Twitter. PICTURE: The Ashburton Army and others celebrate the 4-2 victory over Leicester City. CREDIT: Charlotte Wilson / Offside

Yet, its problem is creating illusions and feelings that aren’t true in real life.

I spend quite a bit of time on Twitter and if I never looked away from my phone, I would think the world was about to end.

In the Arsenal world it’s no different. The amount of negativity surrounding the Arsenal Twittersphere from so-called Gooners is staggering.

Unfortunately, it appears it’s far easier to set up an account and spout nonsense than it is to actually support your team.

I’ve been going to see The Arsenal for more than 25 years and last season I became a season ticket holder for the first time.

I was absolutely delighted and it’s enabled me to experience the authentic atmosphere of games inside our stadium on a regular basis.

What really struck me last season when I attended games was the difference between the mood online and the mood in the stadium.

I’m delighted to say they are eons apart. On Arsenal Twitter it feels like the club is burning down - but inside the stadium there is nothing but love, positivity and warmth towards our players, especially the youngsters.

Don’t get me wrong, I know there is a lot of positivity on Arsenal Twitter as well, from all over the world and I like to think I follow a broad range of accounts, but when I scroll through my timeline you wouldn’t think we were in the middle of a very exciting re-build.

Even when something positive is posted, especially from a larger account, you can be guaranteed the first five comments underneath it will be people having a go at his or her tweet. It’s exhausting.

People are entitled to their opinion and I’m not saying my own are correct, but I just think it is so unnecessary to blurt negativity online, particularly at the players.

Thankfully inside the stadium there is nothing but love for this squad of young players. Even after the Everton game when we had just fallen short of qualifying for the Champions League there was no one shouting abuse or calling the players bottlers - it was applause, singing and genuine support that I witnessed.

One example that stood out last season of the difference between a lot of Arsenal Twitter fans and matchday fans was how Eddie Nketiah was treated.

Online, Eddie took dogs abuse - and I mean mountains of it - but in the stadium, everyone got behind him and sang his name every time he played, even if he missed a chance or two. The support was wonderful to behold.

I urge you next season if you are at a game and you happen to be at one of the local tube stations, pubs or restaurants to take a good look around and I promise you, you will see nothing but happy smiling faces talking about the upcoming game.

People are very excited about this Arsenal team and so they should be. There is a real buzz in town.

I think what is happening to Arsenal right now is generational and not too dissimilar to when George Graham started to fill his squad with young and hungry players and we saw what eventually happened there.

Sure, there are bigger obstacles in our way nowadays that weren’t there in the late 80’s or early 90’s - namely the oil money floating around but we are certainly closing the gap.

Gone are the many overpaid ‘retirement home’ players and we now have a young, engaged and exciting group of players who will give their all for our club.

We are at a point where we are adding great depth and quality to the squad and if we integrate them all in the right way and give them time to grow, I really think we could be on to something special.

I am so excited to see them in action again next season and to see how the stadium reacts as it all unfolds.

I know that come the first home game next season against Leicester the atmosphere is going to be absolutely electric in and around the stadium.

I also want to give an extra special mention to our amazing away fans, the support they have shown up and down the country is just extraordinary. I am very proud to say that between our home and away fans we by far outweigh the negativity that can be found online.

So please, if Eddie misses a chance or if Aaron Ramsdale lets one in that he should have saved don’t post abusive stuff, do what we do in the stadium – support them, get behind them and encourage them.

Buy the current print issue of the Gooner Fanzine here