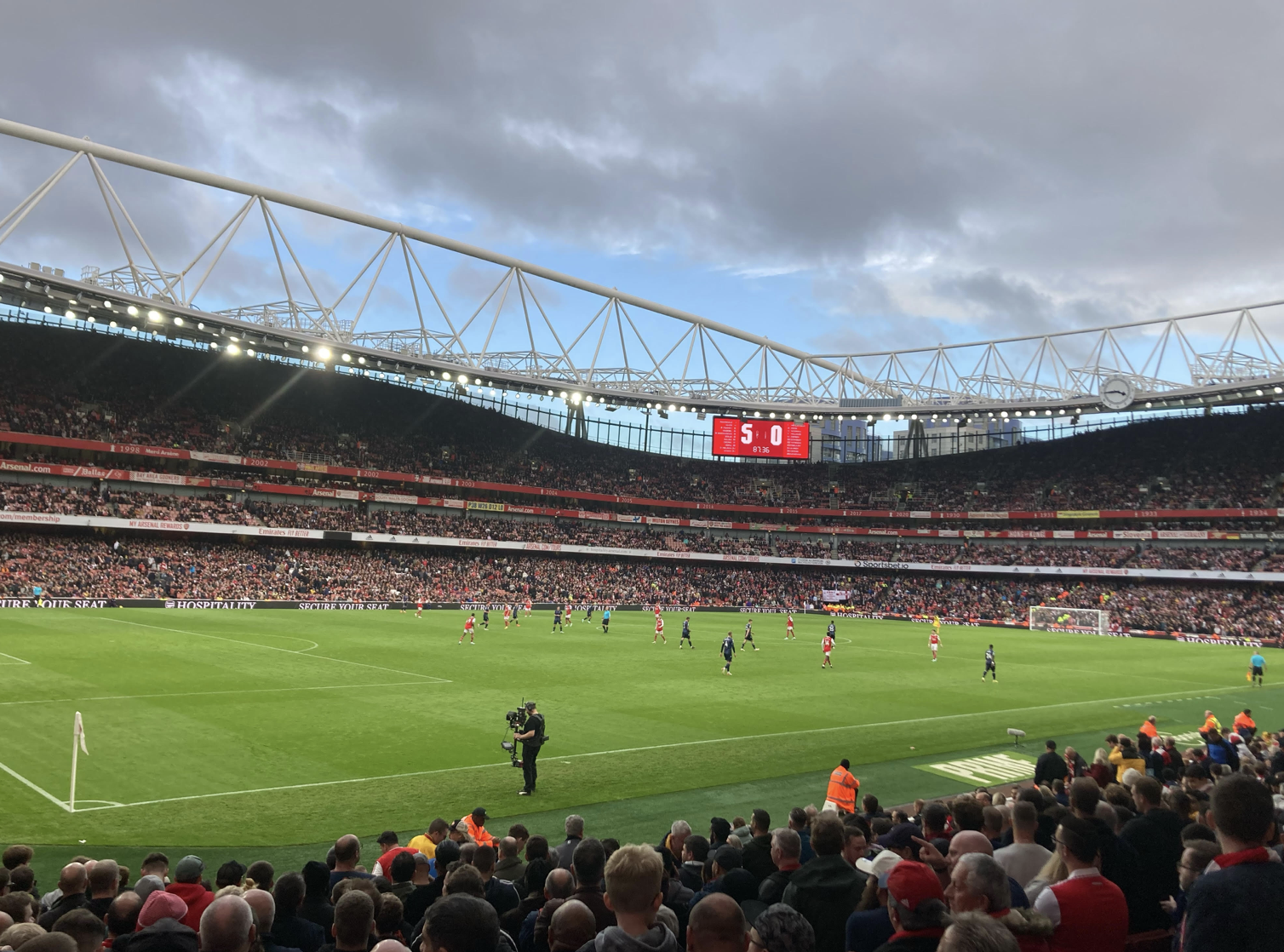 Arsenal 5-0 Forest: Loyal Gooner Fozzy's view of the Sunday's match - his first trip back since before the Coronavirus pandemic: CREDIT: Fozzy

When you had been regularly watching The Arsenal since the dark days of 1962, and then suddenly having to endure a three year absence, it meant that something vital was now missing from my life.

From the days of queuing up to pay my shilling and clunking through the Highbury turnstiles, to becoming a silver registration member, resulting in never missing many games.

The good times were amazing and the bad times were so frustrating that after disappointing matches I regularly made my way to a bench inside Finsbury Park.

Without being influenced by reading of listening to a match report, I bashed out my version of a cross between my own match report and a rant, and emailed it straight off to Mr Whitcher and read it on Online Gooner the following day.

Following a deteriorating medical condition and then the start of the pandemic, and I agreed with the box office to suspend my silver membership until I was fit enough to return.

My wait was extended after I underwent ankle replacement surgery a year ago which meant six months of wheelchairs, Zimmer frames, crutches and more recently progressing to a mere walking stick.

At the start of this season, I declared myself fit enough to return to watch The Arsenal again, but by now the box office had changed its tune and did the dirty on me by cancelling my membership. They were never any good at customer service and nothing had changed.

I was therefore confined to having to watch games on TV or via some dodgy stream.

It’s fortunate that I still believe in good fairies because ninety minutes prior to the start of the Sunday afternoon Nottingham Forest match, I heard a knock on my front door.

It was a kind neighbour offering me a spare ticket for the game.  I worked out that if I drove to the station quickly enough, I could catch the train to Finsbury Park and just about make it for kickoff.

The Gods were with me and my journey went exactly as planned.  My trusty walking stick assisted me to hot foot down St Thomas’s Road, passing by the same terraced houses that I had walked by for the previous sixty years, and turned right into Gillespie Road.

Once more I saw the entrance to the old Highbury North Bank, and started to feel the long lost pre-match atmosphere along with the whiffs of the burger vans and occasional cannabis fumes.

I was interested to see what had changed during my absence.

For starters, I was pleased to see an absence of the vile ticket touts as I made my way up the steps and across the bridge.  I was also pleasantly surprised to see that the entrances into the stadium had become more organised and the security searches had improved.

I found my “seat” in Block 4 with ten minutes to spare.  I had regularly been in this area before and knew, along with everybody else in this block, I would be standing for the entire game.  This would be a good test for my new ankle.  It is a mystery that The Club had done nothing about standing in this area, and I felt sorry for children having to spend the whole match peering from behind a large bloke standing right in front of them.

There appears to me a new pre-match stadium announcer, and I struggled to understand anything he said.

If The Club is going to persist with this chap, perhaps they could consider some elocution lessons. The match started and immediately I could see what I had been missing.

The excitement, the roar of the crowd, the speed and skill of the players - it was all there.

Yet again, Saka got whacked on the ankle by some thug and this was in the first minute and the thug went unpunished.  Some things never change.  Saka carried on limping until being replaced, but he still managed to cross superbly for the amazing Martinelli to stoop and send a flying header to put us in front.

And although this happened far away at the Clock End, for the first time I could clearly see the action, thanks to cataract surgery in both eyes during the summer of last year.  You will never hear me complaining about the NHS.

I can’t understand why they are showing the replays of the goals on the big screen at the far end by just using a third of the screen. Even with my new eyes, this was a huge challenge and spoilt my so-called “match day enjoyment”.

The game came to life in the second half when more chances came, and the goals started raining in directly in front of me.

I had a broadside view of the Partey rocket, watching the ball fizz through the air like a circular firework. The brace from Rhys Nelson and the icing on the cake from the captain made it a totally joyous afternoon.

And it was just brilliant to be back.