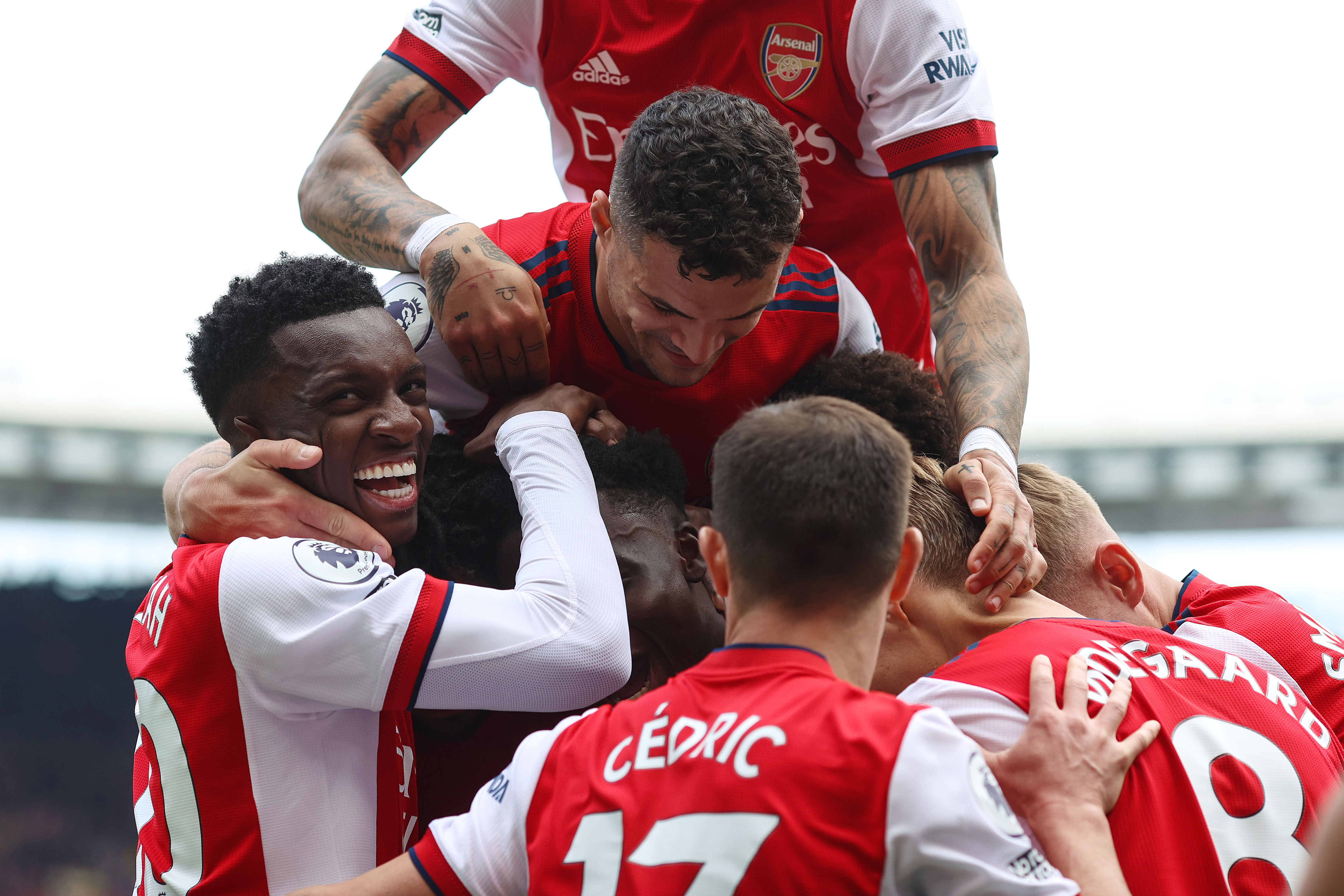 Arsenal beat Manchester United 3-1 to move into the top four in an action-packed game at the Emirates on Saturday lunchtime.

In another pulsating 90 minutes, the Gunners sealed a vital victory to cap an outstanding week following their 4-2 triumph over Chelsea at Stamford Bridge.

Memories of three successive defeats by Crystal Palace, Brighton and Southampton were erased as Nuno Tavares put the Gunners ahead in the third minute, after he followed up Bukayo Saka’s shot that David de Gea could only parry.

The Emirates crowd then broke out into a round of applause as a sign of respect for United No7 Cristiano Ronaldo after his tragic loss this week.

With both sides showing attacking intent, Arsenal thought they had doubled the lead through Eddie Nketiah in the 27th minute. In a bizarre incident. VAR correctly overruled the goal for offside, but then instructed referee Craig Pawson to rule on Alex Telles coming together with the lively Saka, moments before Nketiah shot past de Gea.

Having taken a good look at the video replay on the touchline monitor, Pawson pointed the spot. With tension mounting, the fearless Saka stepped up to take the unexpected penalty - and duly slotted past de Gea to make it 2-0.

It was the mature 20-year-old’s second of the week following his late effort to seal the memorable win over Thomas Tuchel’s side in SW6 earlier in the week.

However, just as the home support looked set to savour the extended lead, Ronaldo pulled a goal back in the 34th minute as he slotted home Nemanja Matic’s cross to make the score 2-1.

The second half continued in the same vein, full of breathless drama between these two heavyweights of English football.

In the 57th minute, Red Devils captain Bruno Fernandes missed his penalty after Tavares handball in the box was penalised. It capped a bad few minutes for Arsenal’s opening goalscorer after also firing high and wide when well-placed moments previously.

United’s armband wearer took an age to strike the ball after his usual irritating stutter – only to see his spot-kick clip Ramsdale’s right-hand post and away to safety, prompting mass celebrations among Arsenal players and in the crowd.

In a gripping game where you dare not look away for a second, Ronaldo then had a goal disallowed. There was still time for Scot McTominay to grapple with Gabriel in a ruck which looked more suited to a rugby match.

With 20 minutes remaining on a gloriously sunny afternoon in North London Granit Xhaka made it 3-1 with a stunning strike from long range – to send the home support into raptures.

Cedric: 7/10: No Takehiro Tomiyashu but a competent display

Gabriel: 7.5/10: Grappled with McTominay to show he won’t be pushed around

Nuno Tavares: 7.5/10 -  Early goal prior to being penalised for handball in the box. Thankful Fernandes missed his spot-kick on an afternoon he won’t forget in a hurry

Martin Odegaard: 7.5/10 – Growing into his role as captain. Another assured display

Emile Smith Rowe: 7/10 – Not as influential as he was during the 4-2 victory over Chelsea but still made his mark in a titanic clash

Bukayo Saka: 8/10 – The fearless 20-year-old is hitting form exactly at the right time after a wobble. Another influential display that never let the United backline settle

Eddie Nketiah: 7.5/10 – Thought he had scored in the first half but was ruled out for offside – even if the move was the prelude to Saka’s spot-kick