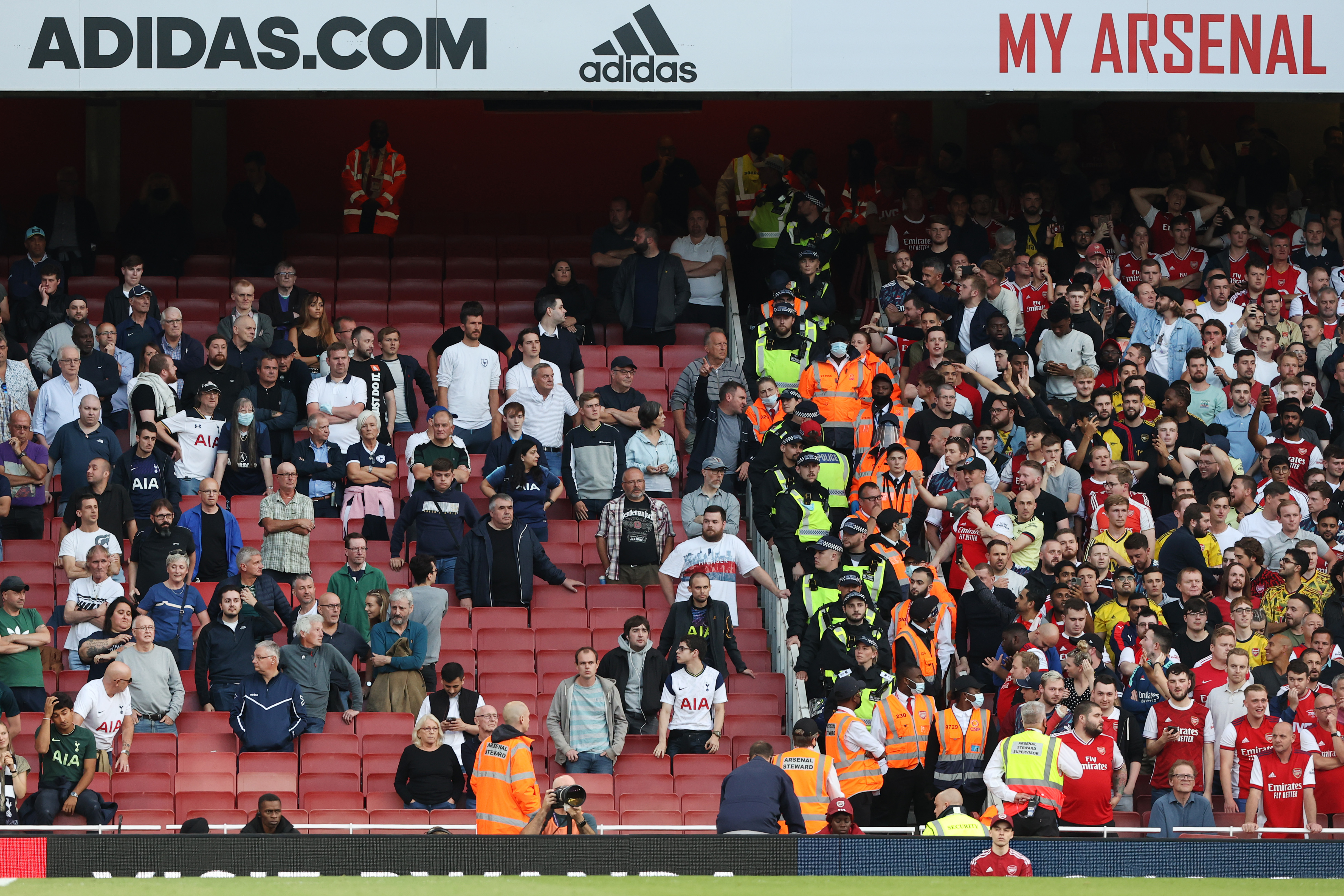 Arsenal v Tottenham, September 26, 2021, London. Empty seats in the away end as Arsenal fans cram in during their victory. CREDIT: Charlotte Wilson / Offside

Four wins on the bounce have put Arsenal a win away at Tottenham from finishing in the top four and above their North London rivals for the first time since 2016.

A win would also complete the first double over Tottenham since 2013/14 (which was actually a treble).

Further, say it quietly, but Mikel Arteta’s men are no longer looking solely in the rearview mirror, sitting one point from Chelsea in third above them.

After successive eighth-place finishes, either third or fourth would solidify Arsenal as a club that is well and truly on the up.

Against Leeds, Arteta made one change from the win at West Ham as Cedric Soares replaced Nuno Tavares.

However, despite Soares’ flexibility to play on either flank, Takehiro Tomiyasu assumed the unfamiliar left-back role, reflecting seldom-seen tactical pragmatism where the Japan international kept Raphinha, Leeds’ most dangerous attacking threat, quiet throughout the game.

Against Tottenham, Tomiyasu could fulfill a vital role, doing a similar job against an in-form Dejan Kulusevski. However, with Cedric Soares matched up with Heung Min Son on the other side, Arsenal’s defensive blanket feels short. A return to fitness for Ben White could see the £50 million man usurp the Portuguese and add much-needed solidity at right back.

Meanwhile, as Gabriel Martinelli once again got the nod ahead of Emile Smith-Rowe against Leeds, Antonio Conte’s defense will no doubt be facing a similar proposition.

The Brazilian added a second assist in as many games to help Eddie Nketiah to complete a brace - and was Arsenal’s most dangerous threat. Martinelli was a nuisance throughout the game and attracted a mindless challenge from Luke Ayling which resulted in the former gooner receiving a red card.

Yet, while Martinelli was unfortunate not to take one of two second-half chances during a 15-minute spell where the home team enjoyed 85% possession, Arsenal once again illuminated their innate ability to force themselves to do things the hard way.

1) As has often been the case, this young side is always a misplaced pass, missed penalty, or, in this case, conceding a sucker punch of a goal, away from disaster - so let's be positive when attempting for find the killer goals that will seal a vital victory in N17.

With the score at 2-1 against Leeds, Arsenal stumbled to victory when it should’ve been a procession complete with olés and a debut for one of the youngsters on the bench.

Yet, there are still plenty of positives. As Mohammed Elneny pitched in with yet another accomplished performance, Nketiah is showing what Arsenal has been missing this season. First, he closed down Ilan Meslier to open the scoring, before doubling the lead by contorting his body to convert a tap in and score his fourth goal in five games.

On current form, Nketiah could finish the season with six or seven league goals. Across all competitions, he has scored nine time, outscoring both Pierre-Emerick Aubameyang (7) and Alexandre Lacazette (6).

Now, there’s no doubt that the clutch top-four clash at White Hart Lane will be different to last weekend’s affair.

In the 3-1 victory against Tottenham at the Emirates in September, Arsenal broke Nuno Espirito Santo’s side’s press three times to score three first-half goals on the counter-attack.

While that tactic provided the foundation for Tottenham’s hard-fought point at Anfield over the weekend, Arsenal will likely set up in similar fashion on Thursday.

Yet, if Arsenal, like Tottenham did against Liverpool, take the lead on Thursday, recent performances suggest that, at the very least, Aaron Ramsdale’s wait for a clean sheet will continue.

While Nketiah’s poaching ability and penchant for chasing lost causes will underpin the attack it will be Saka, replaced by Nicolas Pepe on 68 minutes against Leeds, and Martinelli, replaced by Smith-Rowe after 78 minutes, who will be key to the game plan. Additionally, Arsenal will need the link between Martin Odegaard and Saka to be as fruitful as it was in the victories agents Chelsea and Manchester United.

3) If Arsenal approach the derby with a defensive mindset, they could quickly find themselves in hot water and the opportunity to etch their names alongside that famous lasagna day will be gone

Even with a defeat against Tottenham, Arsenal would still be in the prime position to secure fourth, as would a draw.

However, Arsenal have an opportunity to score a historic win over Tottenham, delivering a huge blow to their rival’s finances amid a turbulent economy with a new stadium to pay for.

It's not quite winning the league but a win on Thursday would come close, especially for the current generation of home-grown talent, all of whom were in primary school when the Invincibles secured the title at the other end of Seven Sisters Road.

Recent performances have illustrated all we need to know: Arsenal play better on the front foot and their defending is mediocre at best.