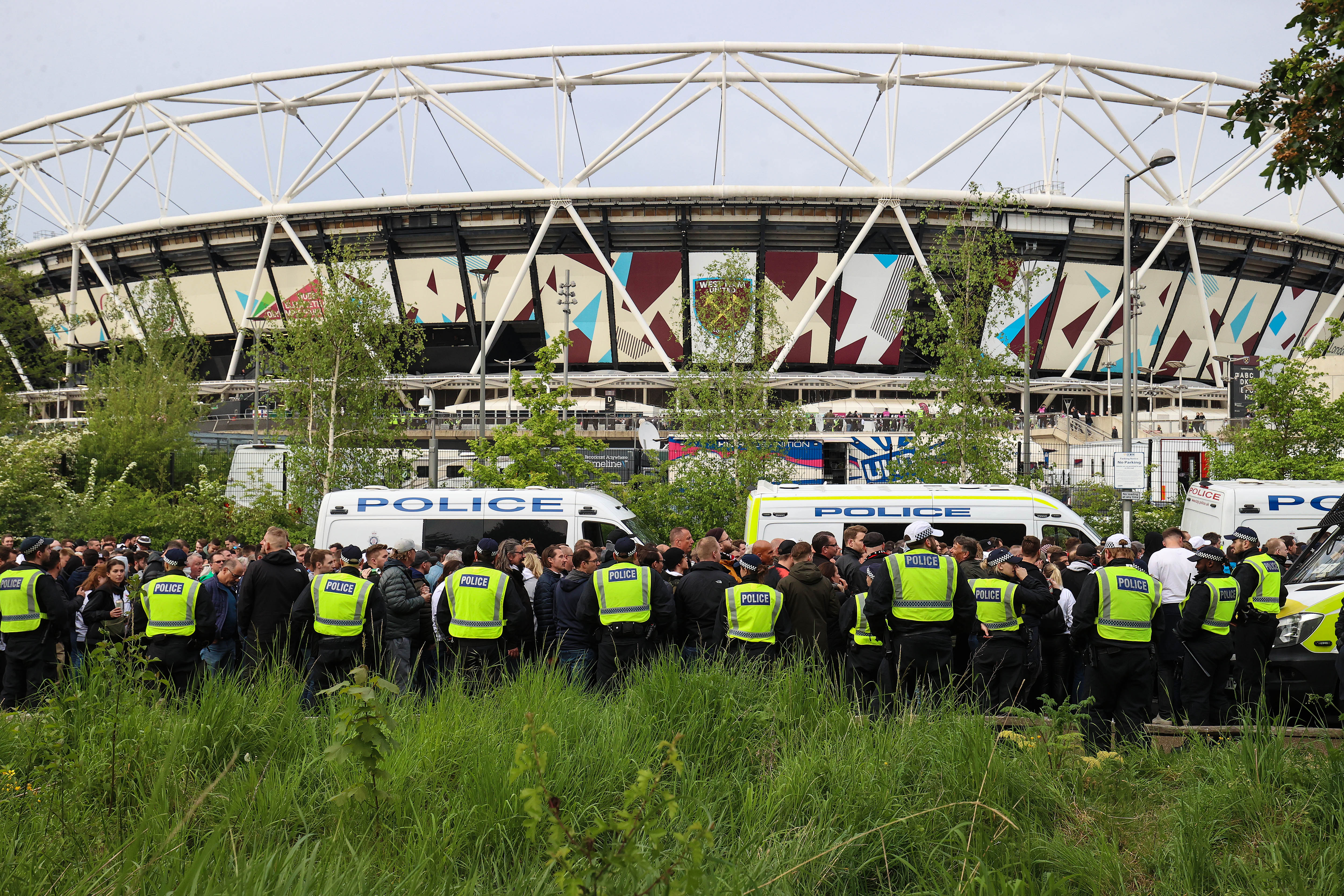 The police corral Frankfurt Eintract fans outside the London Stadium before their 2-1 victory over West Ham United in the first leg of the Europa League semi-final on Thursday evening. Photo: Charlotte Wilson / Offside

West Ham’s European commitments will surely impact their efforts against a rejuvenated Arsenal side on Sunday afternoon at the London Stadium.

A late Jarrod Bowen overhead kick was the third time that West Ham hit the woodwork in an agonising 2-1 defeat to Eintracht Frankfurt- an ideal result in many ways for Arsenal, who will be well aware that the Irons’ main focus this week is on the second leg of that Europa League semi-final.

However, with West Ham seventh in the Premier League table and possessing a game in hand over sixth-placed Manchester United, there is still very much to play for in the league too for David Moyes’ side.

After three consecutive defeats to teams in the bottom half, Arsenal turned things around with big wins over Chelsea and Manchester United to heighten their top four hopes.

The Gunners weren’t even always at their best against the Red Devils but were buoyed by a vocal Emirates crowd and Granit Xhaka’s goal sealed a brilliant victory. Xhaka’s resurgence (yes, we’ve been here before) has been prominent in recent wins, and goals from the often criticised Eddie Nketiah have proven why he should start ahead of Alex Lacazette.

Nketiah’s pace has caused many problems pressing opposition defences as we saw so prominently at Stamford Bridge, and it could be a key feature of trying to unlock West Ham’s backline.

With Craig Dawson suspended and injuries to Diop and Ogbonna, the Irons might have to turn to prospects from the under-23s in defence, so the likes of Nketiah, Saka and Smith-Rowe should relish their chances.

To add the Europa League ventures on top of these injuries and suspensions, it’s looking like a tall order for the Hammers if Arsenal rekindle the form that they have found over the last week.

Injuries also haven’t been kind to Arsenal but the return of Takehiro Tomiyasu was warmly welcomed last Saturday, with Cedric Soares in need of a rest at this point.

Tomiyasu may not start against West Ham but can play a key role at the back end of this season in steadying Arsenal’s defence, who will have to be wary of the threat that West Ham pose with set pieces.

Arsenal go into the game two points ahead of Spurs and sitting in the coveted fourth place, but Tottenham face Leicester at 2pm (who also have a European semi-final coming up), with a win moving Spurs back above the Gunners and putting some pressure back on Mikel Arteta’s side.

We’re also now less than a fortnight away from the second North London Derby of the season which will surely be where top four is won or lost for either side.

The Gunners haven’t lost against West Ham in over three years and have an excellent chance to continue that run here due to the Irons’ Europa League predicament and injury worries, but David Moyes will not be taking this game lightly whatsoever and Arsenal will have to continue their fine recent form to continue their top four push..