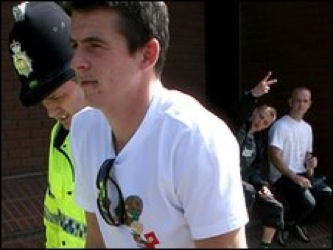 It occurred to me during the debacle of the last World Cup that the nation’s footballlers can often tell a lot about the nation’s soul. The pre-war and early post war generation had the modest genius and heroism of Sir Stanley Matthews, Tom Finney and Joe Mercer. The baby boomers had the class and gentleman spirit of the two Bobbies - Charlton and Moore. For us children of Thatcher and Tony Blair - sadly we have a greedy, less than attractive slightly rotund ginger man who uses prostitutes called Wayne and in John Terry we have the son of a drug dealing father and a shoplifting mum who between them were too stupid to even put a surname on their offspring’s birth certificate. However, what of the man who doesn’t even measure up to the professional and moral standards of these two wretched products of broken Britain? Joey Barton – born in Liverpool just weeks before Alan Bleasdale’s magnificient ‘Boys from the Black Stuff’ via BBC2 told the Nation of the decline in its midst in the Autumn of 1982 – has rarely disguised his disdain for the produce of the ‘Golden Generation’ of English football and their overshadowing of his extremely modest talents. In the aftermath of England’s quarter final defeat in 2006 Barton had wrote ‘England did nothing in that World Cup, so why were they bringing books out? 'We got beat in the quarter-finals. I played like s***. Here's my book.' Who wants to read that?’ His outburst of righteous indignation is largely disingenuous however, it’s more in the vein of pure bitterness – after all if England is going to showcase limited talent and limited technique to the world in major championships Barton obviously feels he’s the man to fly the flag for old Albion. Also – if Stevie G et al are going to write books about footballing failure Barton probably feels they should at least provide lift up flaps to allow people of his reading age a chance to understand what you’re putting into print.

I’ve always scoffed how in the last ten years or so the media have always thrown members of the underclass in our direction to (often wrongly) blame for all of society’s ills – be it Jade Goody, Lady Sovereign, Vicky Pollard, fictional characters from the massively overrated Channel 4 comedy Shameless, those who go on Jeremy Kyle or the nation’s moral panic about the ‘hoodies’ that inhabit our town centres. However every time Joey Barton’s ugly boat race crosses my TV or newspaper I can’t help feeling the lights are rapidly going out all over this once great nation I inhabit. As the downturn chunders on, the working classes of this nation are an increasingly beleaguered bunch in relation to its effects. However, as throughout history, rather than a class battle between the haves and the have nots, the lower orders have often been fighting a battle between the ‘proletarians’ and what Karl Marx in his writings often referred to as the ‘lumpenproletarians’ – the latter being in his words the ‘refuse of all classes… swindlers, confidence tricksters, brothel-keepers… and other flotsam of society’. They were originally highlighted by Marx as a class that appeared during the time of the French revolution who allied themselves with the ‘ancien regime’ and often deliberately worked against the cause of enlightenment and social betterment for the masses. The distinction between the two is largely thus – to be a ‘prole’ is a matter of circumstance which people are often born into and in many cases often powerless with regard to, but in essence an honest member of society. To be a ‘lumpenprole’ however is a matter of mentality – and one which he has every control over.

To me, the charmless and ugly Joey Barton has always personified every aspect of this residuum class of the lumpenproletariat that blights the everyday life of the decent folk of these Islands. Barton is the criminal class personified – just look at this thug’s record: He received his first red card in 2003 for arguing with a referee in the tunnel – not even on the field of play – when his side was 3-0 down against Tottenham. So missed by his team mates was Barton that 10 man Manchester City went on to win 4-3. Not that Barton has ever had the ability to build a constructive rapport with his colleagues - at City’s 2004 Christmas party he stubbed out a lit cigar in a youth team player’s eye and in July 2008 was kicked out of Manchester City for committing assault occasioning ABH against team mate Ousmane Dabo. Ordinary members of the public are no more safe from this troglodyte either - in May 2005 he broke a 35-year-old pedestrian's leg while driving his car through Liverpool City Centre at 2AM. In the summer of 2005, Barton was sent home from a pre-season tournament in Thailand after assaulting a 15-year-old Everton supporter and had to be restrained from attacking the boy further by his team mate Richard Dunne. Just over a year later Barton was fined by the FA for exposing his backside to Everton fans – quite probably in order to give his brain some fresh air. The fact that Barton had left secondary school with seven GCSEs to his name is pretty much conclusive proof that exams really are too easy these days.

Barton’s crowning glory however came in May 2008 when he was sentenced to six months’ imprisonment in relation to an incident where CCTV footage showed Barton punching a man twenty times causing him to lose consciousness, as well as breaking a teenager’s teeth. Lest we forget also that Joey’s younger brother Michael Barton and his cousin Paul Taylor are both currently serving time for a racially motivated murder committed with a pick axe against young black Arsenal fan Anthony Walker who had been studying for his A-Levels at the time and innocently out on a date with his white girlfriend. The latter of course isn’t directly Joey Barton’s fault – but let’s just say such rancid racist attitudes are often borne from the family one grows up in. Rotten apples after all barely fall too far from the tree that spawned them.

Despite being such an odious creature however, Joey Barton is by no means society’s loser. In a nation where nearly three million could be on the dole by this Easter, smug Joey Barton on his hefty wage is one of the ones who are winning in this world. Where the everyday working man fears for his job and how the merest slip on the behaviour front can see him fall into the mire, Barton can get away with what he has wreaked on others over the years and can still lord it over the rest of us. However much you hate Barton’s guts, he sure as hell doesn’t wish he was you. And how is this possible? Well because like all of the ugly henchmen of this post credit crunch world – be it the men the loan sharks send round to break your kneecaps when you’ve missed a payment, the cat burglar who steals an old man’s savings, the pusher who gets bored unemployed youth hooked on narcotics or the pimp trying to find a woman that’s weak – Joey Barton is armed with nothing more than an empty head and a moral vacuum with the simple aim of bringing back results for his unscrupulous master, the equally scummy Alan Pardew who in his guise as West Ham manager resembled nothing more than a Rottweiler owning arsehole sitting in a North Woolwich cess pit boozer moaning about foreigners taking our jobs and recommending that the answer to all of life’s little conundrums is to dish out a good kick in the bollocks.

Though Arsenal fans’ opinions are often split on Abu Diaby’s abilities as a player, when you bear in mind his record with injuries and the career threatening leg break by Sunderland’s Ryan Smith in 2006, his angry reaction to Barton’s disgusting challenge is entirely understandable. However – like many of the beleaguered masses when they’ve had enough of being bullied and threatened by Barton’s lumpenprole ilk on council estates the nation over – Phil Dowd personifies the cowardice of the authorities and sides with the thugs, as well as failing to be consistent when the boot is on the other foot. ‘Chesney’ – seeing that Arsenal are going to be the team kicking off after a goal is scored against them – rightly refuses to give the ball to Barton. Kevin Nolan, Barton’s fellow gang member then attacks ‘Chesney’ for not giving in to the demands of his criminal thug friend – and Phil Dowd, the coward in authority, then gives ‘Chesney’ a booking for not giving in to their thuggish demands.

People might view this piece as sour grapes because Barton ultimately stopped my side taking three points after we were cruising four nil at half time. They might think I’m being a bit Daily Mail in oversimplifying deep social problems by laying the blame on one particular thuggish footballer – maybe they’re right. But society today is ugly and these days I seem to see little Joey Bartons everywhere. And if you need me to put my mentality for you in a nutshell then here goes – when Joey Barton’s kith and kin murdered Anthony Walker, the victim’s mother had plead forgiveness stating ‘I have to forgive them. I can't feel anger and hatred, because that is what killed my son’. All I can say is that she’s a much bigger person than I’ll ever be and must admit that I’m a petty and vindictive little man in comparison. I loathe and despise both of the weasels, enjoy the fact they’re no longer part of our society and actively pray for the downfall of their Premiership Kith and Kin as well as every little lumpen Joey Barton clone in the nastiest and most humiliating fashion possible – for the sake of football and more importantly, for the soul of this once great nation.