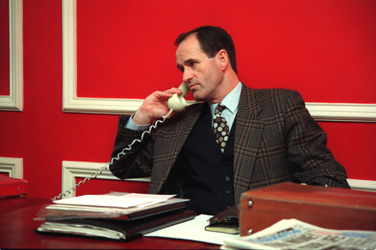 George in 1994: Making a bid for another centre half?

I never thought I would feel compelled to give a history lesson, it makes me feel old and patronising (at 44). But I was struck by the comments reacting to my debut article, challenging me to swap now for the beginning of the George Graham era.

For the record, I would. In a heartbeat. Arsenal was the only solid thing in my life in those days. And on a wider point, I think it’s such a shame that so many otherwise disenfranchised young men are being priced out of attending matches. It was such a great outlet for me back in the day.

So many people referred to the George Graham era as the early 80s in response to my piece. The early to mid-80s WERE drivel with the likes of Terry Neill and Don Howe at the helm. Boring AND unsuccessful. I was there to witness the drivel from the North Bank and there for the post-match protests.

But it all changed when Graham popped up at Arsenal in 1986 with an unremarkable management CV, though a club legend as a player, without which he wouldn’t have got a sniff of the job.

We were fast becoming a resting home for ex-internationals when he arrived. ‘Gaddafi’ shipped out most of that bunch straight away and blooded half a dozen young prospects who had come through the ranks together, blending them with a handful of unknowns signed at little cost.

The new team hit the ground running… with a plan. Keep things tight, press and play percentages. That might sound dull but for me, and many others, it was exciting because there was this sense that we were seeing something really special develop from its embryonic stage. He was truly building from the back and he had respect for the Arsenal way, The Arsenal.

We won the Littlewoods (League) Cup in his first season. Slight tangent regarding that trophy… back then I helped paint the stadium for a week with friends during the school summer holidays in exchange for a season ticket. I’m sure I won’t get sued because they’re probably all dead by now but the painters on the payroll were basically a small bunch of elderly, somewhat kindly, drunks. Can you imagine anything like all of that happening now? These days, painting the Emirates probably involves a contract that gets put out to tender and various multi-national corporations vie for it (slight sarcasm BTW but who knows?).

When me and my mate were taking a break in the East Stand, fans were having their pictures taken with the Littlewoods Cup. The funny thing is that they just left it behind on its own for an hour when the photographer went to lunch! Anyone could have just walked in off the street and taken it.

Anyway, the team that Graham built in the first half of his reign could compete with anyone, his coaching philosophy was apparent in every game. For the most part, I didn’t find it boring. It was intriguing, tactical and there was definitely a quality to our play, we weren’t Wimbledon. And the team he created was so much more than the sum of its parts - and there were some pretty good parts. The Liverpool machine was better man for man but we were always a match for them.

Let’s have a look at the kind of players we had back then…my best XI of the Graham era: Seaman; Dixon, Adams, Keown (quicker than Bouldy and equally nasty), Winterburn; Rocastle (no sentimentality here, he should have won at least 50 England caps), Thomas, Davis, Merson (who, because of his longevity at the club, just edges out Limpar); Smith, Wrighty. I think they would give today’s XI a spanking because the current bunch rarely earn the right to play against physical teams.

Most of the older fans will know all or most of this and will also recall that Graham was not universally adored at any point of his reign. There were always those who wanted to see more expansive football (it's ironic that the current big complaint about Wenger is the exact opposite of that) and I was one of those at times.

But my only lingering complaint from that era is that we became a cup team after we signed Wrighty. The fans used to sarcastically chant: “Ian Wright FC.”

My gut feeling is that the board lacked ambition at that stage to kick on (after signing such a brilliant, natural goalscorer) and become one of Europe’s powerhouses. I think that somehow impacted on Graham and may, ultimately, have even fed into his crooked practices. That’s pure speculation but it was a strange period at the end because he had mostly come across as being ultra-ambitious.

Maybe it’s just something about hitting a glass ceiling erected by the club itself. Sound familiar?

That would have been a good ending but I have to make something clear, the first half of Wenger’s reign was immeasurably better than the Graham era. We had the lot.

They both deserve a pat on the back for that…