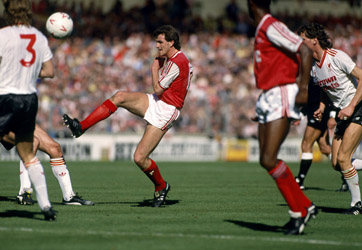 Hayes: One great season but it was downhill after that

Hayes nearly puts Spurs to the sword at White Hart Lane. No, not Martin for the Gunners, baby brother Paul for Wycombe Wanderers in the FA Cup fourth round this season.

It got me thinking about Arsenal’s outstanding one-season wonder from the Eighties. So I asked a seasoned Gooner pundit whether he rated the former England B and under-21 international. Answer: “Half Bergkamp, half Gus Caesar.”

That about sums up the languid-looking winger who seemed to have the world at his feet at one time. But could he have, with a bit of luck, established himself as a top class player or was he a lazy misfit who over-achieved for one season?

I remember him coming on as a sub in his latter years at Arsenal to the masochistic amusement of some Gooners at Selhurst Park but a middle-aged fan piped up: “He knows what he’s doing.”

The guy seemed pretty sure but I never will be, it’s become one of the mysteries of life for me…

Hayes was never blessed with great pace, although no slouch. Though never a jinking, out and out winger, his close control and natural passing were pretty good. But his main attribute was his footballing brain. He was intuitive, making great runs cutting in from the left onto his favoured right foot to get on the end of things.

His big problem, other than being injury-prone, was that he was a confidence player. World beater on his day, anonymous passenger at other times.

The East End lad joined the club as an apprentice in 1982 and made his debut for us as a teenager the following year. But it wasn’t until George Graham took over that he became a regular, in place of the injured Graham Rix (whatever happened to him?).

Hayes was our top scorer that 1986-87 season with 24 goals (admittedly that included 12 penalties but they still have to be slotted home and I can’t remember us ever having a more consistent marksman from the spot).

Of particular note, he once gained possession in our half, dribbled past half the Leicester team before stroking the ball into an empty Clock End net, to the delight of the Highbury faithful. And, of course, he was part of the team which beat Liverpool at Wembley to lift the League (Littlewoods) Cup in 1987.

But that first season under GG was as good as it got for “Oopsy Daisy Martin Hayesy”, as the fans’ affectionate-critical song for him went.

There were a few other highlights in his Gunners career: Scoring at Wembley in the 1988 League Cup final (but also hitting the post from a yard out when we were 2-1 up) in the calamitous 3-2 defeat to underdogs Luton Town.

And he was also on the pitch as a sub when we won the Championship at Anfield in 1989 and had played enough to earn a winners’ medal. But we all knew that his days as a regular starter were numbered when we signed crossing machine Brian Marwood from Sheffield Wednesday earlier that season.

Hayes slowly but surely drifted out of the picture and GG was not sympathetic to his lack of first team opportunities or meagre £600 per week salary, which was peanuts even then. So he made the brave decision, after eight years, to leave the club he described as being like “his mum and dad”.

Aged just 24, he was signed by Celtic in 1990 for £650,000. A reasonable fee for both clubs. But despite an improved salary and being hailed as a big signing, he didn’t fit in and only played seven games in three seasons for the Bhoys.

I recall a story where a teammate had given him a lift to training and Hayes had somehow got locked into the car on his own for the entire session. The sad thing is that no one noticed his absence while he had a nap in the back of the vehicle. Awwww.

A loan move to then top flight Wimbledon in 1992 would have been made permanent had the luckless wingman not broken a leg. And he was released on a free transfer by the Glasgow giants in 1993 to then third tier Swansea City. Despite some initial success, he was again let go for nothing, in 1995.

His career then went into further free fall as he drifted into non-league football, playing for a number of clubs in the lower reaches before Bishop’s Stortford in 1999, where he became player-manager. Hayes hung up his boots in 2001 but carried on as gaffer there until 2008.

He then had short-lived spells in charge of several other non-league clubs, notably guiding Dover Athletic to the FA Cup third round proper, their greatest run in the competition.

Most recently on the radar, he was appointed as manager of little Waltham Abbey in 2015. But he resigned after 14 games without a win in the Ryman North just over a year ago.