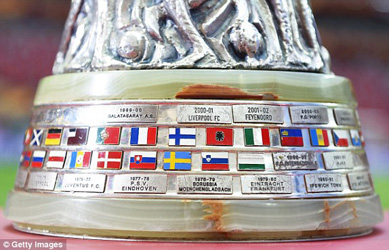 With Europa League football looking like a strong possibility for next year, I’m quite sure that most Arsenal fans will be groaning at the thought, seeing it as an unwanted distraction and drain on our league form, one that must be exited at the earliest opportunity through the fielding of a second-string team as with the League Cup. Yes, it is a lot of matches and travel and we will be stuck with a Thursday-Sunday schedule all season and yes, the evidence does seem clear that it does have a negative impact on league form. But if it does happen we must see it as an opportunity to be taken rather than a burden.

A successful Europa League campaign would be an immensely beneficial experience, giving our players a chance to develop their abilities at continental level against opposition who are not of the same quality as that found in the Champions League. We would get the ability to develop our understanding of the more sophisticated tactics required in European football and this would help us immensely upon a return to the Champions League.

Furthermore, for a club that (apparently) aspires to be a member of the elite, two European trophies in our entire history is not enough. Examine the records and we are joint seventh with Leeds and West Ham and behind Spurs and Chelsea. Moreover, no one can deny that two semi-final appearances and one final is a poor return on nearly twenty years in the Champions League. So, a Europa League victory would give us a chance to build up the club’s European history and heritage.

And then are more pragmatic concerns. If next year we are out of the Champions League, then winning the Europa League will be our best chance of getting back into the elite competition in 2018/2019. If we fail to make the top four this year, then would you really expect a side shorn of Sanchez and perhaps Ozil to do better next year? When, let us not forget, we will face a top five who will have strengthened and improved further. So, as Manchester United are finding this year, the Champions League place on offer to the Europa League winners is a very handy back door route to the top table, and a get out of jail free card for a poor league campaign, one that could prevent a longer period of malaise and decline at the club.

Fundamentally however my key point is this: whatever our chances of winning the Europa League may be, they are currently infinitely better than our chances of getting past the last 16 of the Champions League. Arsenal have never been so far from reaching the Holy Grail of the European Cup, as shown by our failure to win a knockout tie in that competition for seven years. So why not actually go for something that we may have a chance to win? Football is at the end of the day about winning trophies, and this is all anyone remembers when the history books are written. I for one would far rather celebrate a victory in Lyon in May 2018 than go through the humiliation of a 10-2 thrashing again and I can’t think of anything else that would give the whole club a bigger lift.