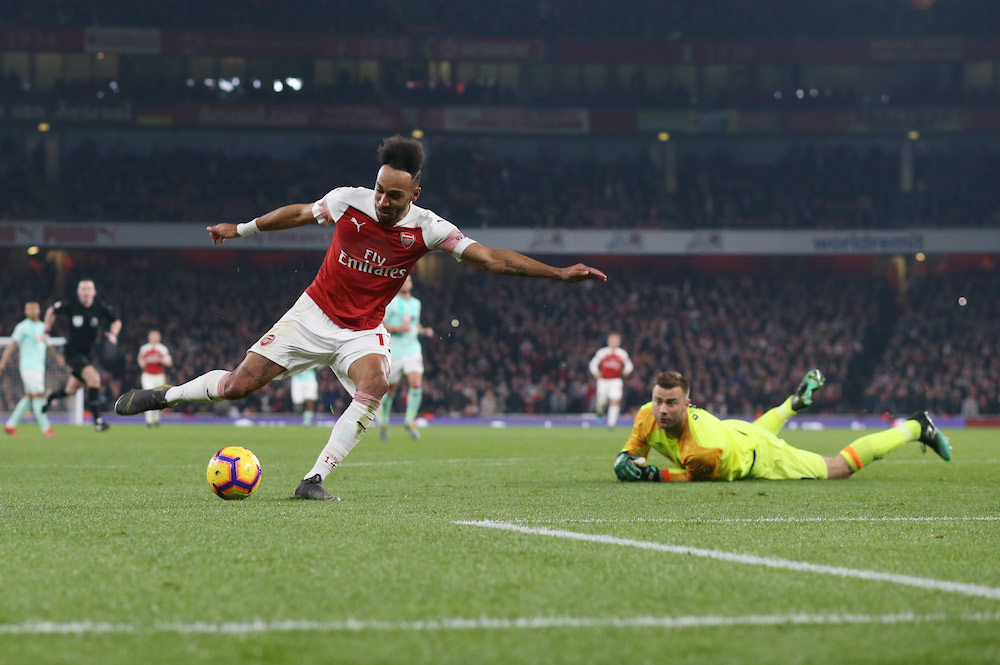 Granted, there was drama at both ends of the pitch, but ultimately, the sheer number of chances created by Arsenal at home to Bournemouth justified the four goal margin between the teams. The truth is that both teams should probably have scored more, but Unai Emery’s team was plainly superior over the 90 minutes.

There was rotation with several players coming in to the starting eleven. Monreal, Koscielny, Jenkinson, Guendouzi, Ozil and Aubameyang began the game as Unai Emery rotated ahead of the match against Spurs next weekend.

As ever, Eddie Howe’s team came and played open expansive football. It meant we saw two attacking sides who were questionable at the back. What unfolded merely confirmed that there are teams who are even worse off in this department than Arsenal.

Mesut Ozil was involved in the two opening goals, nicely chipping the keeper for the first, and skillfully teeing up Mkhitaryan for the second. The latter had a very decent match, providing two assists in addition to his goal and to an extent belied the idea that he and Ozil cannot be in the same eleven and both operate effectively. Mkhitaryan’s goal had shades of the type Arsenal concede periodically, with a Bournemouth player trying a Xhaka style Hollywood pass across his own defenders and it being cut out. It was like taking candy from a kid.

On that note, Arsenal being Arsenal a clean sheet was a big ask, and Guendouzi was robbed of the ball on the edge of his own area making it easy for Bournemouth to score. They had already enjoyed another very decent opportunity when Arsenal were one up, but Leno, after hesitating to play the sweeper keeper role to the full, pulled off a good one-handed save to make up for his failure to deal with the danger initially.

Still, with the game so open, the goals flowed after the interval. Koscielny got one in off the post early in the second half, Ozil might have had a second, but hit the post. Bournemouth hit the bar themselves through Ryan Gosling. Mkhitaryan provided a strong run out of defence before playing a perfect through ball for Aubameyang to round the keeper and break his own recent scoring duck. Alexandre Lacazette came on from the bench and scored a very nice free kick over the wall.

Happy days, and good for the goal difference, although on this night, few favours from elsewhere, as both Manchester United and Chelsea won. The advantage of the latter though, is that they beat Spurs, bringing them, and third place, within four points of Arsenal ahead of the derby on Saturday lunchtime.

Iwobi and Suarez were the other subs, and Suarez, in these conditions, had the opportunity to show us a little more of his talents than we have seen so far. I don’t think we’ll be signing him at the end of the current season though. He’ll probably end up being loaned out to another Spanish club for the 2019.20 campaign. I was especially impressed with the tenacity of Lucas Torreria last night. It should be no surprise by now, but is worthy of mention. There is a team spirit at the club which doesn’t feel like anything we saw last season, and some of this may be down to Emery’s refusal to put any players on a pedestal, and do special favours. So Ozil has to play by the same rules as everyone else, and earn his spot. The nature of the Tottenham match suggests he will be back on the bench, as surely Mkhitaryan and Iwobi are ahead of him in the pecking order, and one imagines both Lacazette and Aubameyang will start. Aaron Ramsey could also come into the team.

There have been valid questions over whether or not this season has actually seen progress from last. The table leaves us in no doubt. Arsenal are fourth with 56 points from 28 matches. At the same stage last season they sat in sixth position with 45 points. Their goal tally was 51 for 39 against. This season it’s 60 to 38. So no significant improvement at the back (and injuries will be the mitigation there), but better results due to the improvement going forward. I’ve been banging on about the team reaching the 76 point target which I believe will secure fourth place, so there are now 10 games left for the Gunners to attain 20 points. They must take nine of those from the home games v Newcastle, Palace and Brighton. And then require 11 from the other seven games (six of which are away) – three wins and two draws would do. It’s achievable, certainly, assuming the team can improve between now and May. But there is reason for hope.

The current issue of The Gooner will be on sale at the forthcoming home matches against Manchester United and Rennes. It can also be bought online and posted to you. UK addresses buy here, and overseas addresses buy here.