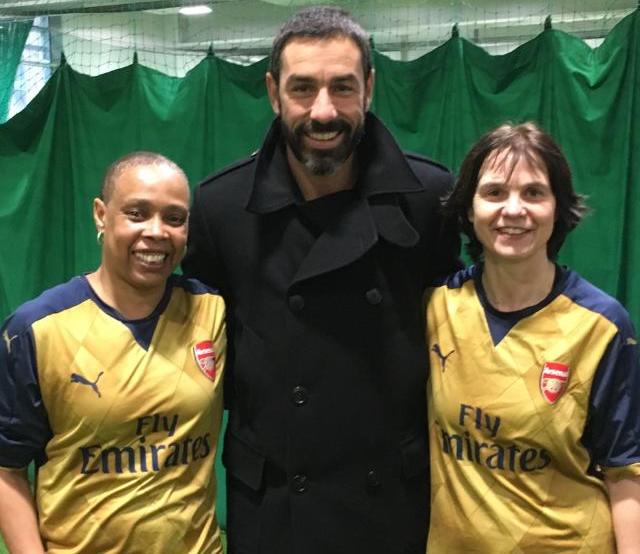 You need to be 45 or over to play… and female! 45-y-o Robert Pires poses with two of the team.

Ed’s note – This one’s a bit off topic, but what the hell. When we are approached to help publicise stuff, we occasionally try and help out. Here’s an example. We received an email from Ann Gibson recently which read as follows:
‘We’re nearly out of season and the guys are going well. The women’s team too. Out in the shadows are the Arsenal team I play for. We’re Arsenal in the Community over 50’s. We’re the other generation who can’t give up playing even though we probably should. We play at the Hub Saturdays and Sundays and are enjoying revisiting this beautiful game. As we’re off to the Old Girls World Cup in France at the end of June we would love everyone to know about us and how hard we have worked towards this.
So, with that in mind, would the Gooner be interested in helping us raise our profile?’
In response we offered to run a story on the website, and here’s what Ann sent for us to post…

Every Saturday morning ‘Lanesra’, a diverse group of women in their 40s, 50s and 60s, put on their glad rags (football kit and football boots) to train and play football at The Arsenal Community Hub, 56 Benwell Road, Islington, London, N7 7BA.

The team comprises all abilities, from beginner to experienced. Some players are of the generation that football missed. Others are rekindling their love for the beautiful game which they played/watched in their youth. No matter what, ‘Lanesra’ is for everyone.

The players take their football seriously and at the same time make it fun. The benefits are ‘sweeping’ (in the football sense) – players are kept on their toes both physically and mentally. Other advantages include the opportunities to play against other women’s teams (‘home’ and ‘away’), the camaraderie and friendships.

‘Lanesra’ is definitely going places. In June 2019, a squad of 10 is going to Soissons in France to play recreational 7-a-side football in the inaugural ‘Old Girls’ World Cup, which coincides with the FIFA Women’s World Cup. In preparation for the competition the players have been training hard since January 2019 and have a few matches lined up in England before they go to France.

Lanesra would like to increase the number of women attending the Saturday morning football sessions at The Arsenal Community Hub. So, if you are a woman aged 45 or over, don’t hang up your football boots just yet – dust them off, put them on, lace them up, go on the pitch, take centre stage and have a ball.