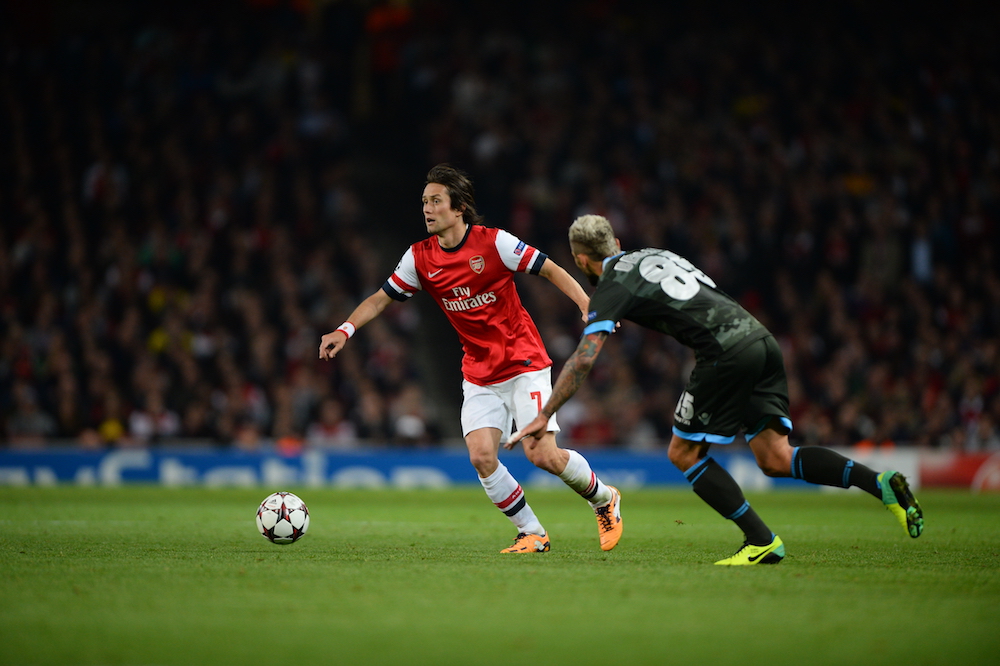 Neither side in great form
No question that the performance at Everton has derailed the optimism around the Arsenal team that previous results built up. And reason why suddenly the feeling is that the Europa League is a more likely route to the Champions League next season. At least though, Napoli are not in the greatest of form either, with a disappointing 1-1 home draw against a Genoa side reduced to ten men after 28 minutes. That followed a defeat away to Empoli the midweek before. Having said that, Napoli are second in the Italian table, and thumped Roma away 4-1 in the game before that loss at Empoli. Summary: Who knows which Napoli will turn up? A home win – maybe using a Betfair promo code - is probably the least risky result to back, as Arsenal are on safe ground, although if we are being realistic, probably need to be two goals up before heading to Italy.

The Great Kos Dilemma
Laurent Koscielny trained with the team yesterday, and there will be a test today before it is decided whether or not he will play. His form since returning to the team in December has been surprisingly impressive, and there seems little doubt Arsenal will need their captain to play in a number of further matches before the season’s out. The question though is which, given they can’t risk him every game. It was in the semi-final second leg of this competition last season that his season ended, as, cruelly, did his chance of becoming a World Cup winner with France. My hunch is that he’ll be saved for the second leg, but I really cannot see him playing against Napoli twice and Watford. Arsenal will be weaker in defence without him, which I suspect means we’ll see a back five to compensate, with Sokratis there to cover the inevitable Mustafi mishaps.

Auba has been ill
In

Unai Emery’s press conference yesterday the head coach informed the media that the reason his number 14 had been on the bench for the last two matches was that he was ill, and taking antibiotics. He is reputedly well enough to start this evening. If that’s the case, he most likely will, and in that case the decision Emery has to make is whether to start Lacazette or bring him on from the bench. Arsenal will need goals, no question about that, but they can’t be too gung ho either. One imagines a more workmanlike players, such as Iwobi will start on the left with Auba in the centre. If Mesut Ozil plays and there is a back five, it will put a lot of onus on whoever is selected at right wing back. Henrikh Mkhitaryan will do marginally more to help out the defender behind him, so could get the nod. As for the holding midfield pair…

Lucas Who?
With the international break and his three game Premier League suspension, it feels like an eternity since Lucas Torreira pulled on an Arsenal shirt. In fact, it’s four weeks, the second leg v Rennes being his last meaningful appearance, and that only as an 87th minute sub. Yet with his experience of Italian football and Emery’s rotation policy (to say nothing of the disappointing displays of Guendouzi and Elneny at Goodison Park), it would be surprising if he did not start this evening. Whether it will be Ramsey or Xhaka next to him will, I suspect depend on Xhaka’s fitness. One imagines Ramsey will be starting against Watford on Monday night.

David Ospina is on loan with Napoli this season, and has been declared fit to play in this game after being hospitalised for concussion suffered in a game against Udinese on 17th March. However, before his injury he has generally alternated with Italian Alex Merit in the Napoli goal. Merit did not play at the weekend against Genoa, with a little used Greek keeper getting the nod. Was he dropped or rested? Keepers aren’t rested are they? Anyway, back to Ospina. He has just over a year left on his Arsenal deal, and Napoli have an option to buy him this summer. Arsenal fans will remember him for some clangers, so may feel perfectly happy if he does get the nod this evening. It will certainly be an evening of mixed emotions for Ospina, whether he plays or not. Should Napoli decide not to buy him outright this summer, with the retirement of Petr Cech, you could see Ospina returning to the club to play second fiddle to Bernd Leno next season, as his contract runs down. That, of course only happening if an alternative buyer cannot be found. I am certain Emery would prefer to have a second choice keeper on Ospina’s wages who is going to be around a bit longer.

Conclusion
Difficult one to call, but Napoli’s last away performance in Europe was a 3-1 defeat to Salzburg. They don’t always travel well. Arsenal to win by a couple of goals. Another 3-1 scoreline more likely than 2-0. Whether that will be enough going into the second leg is difficult to say, but the Gunners probably need to win this evening to give themselves any chance of progress.