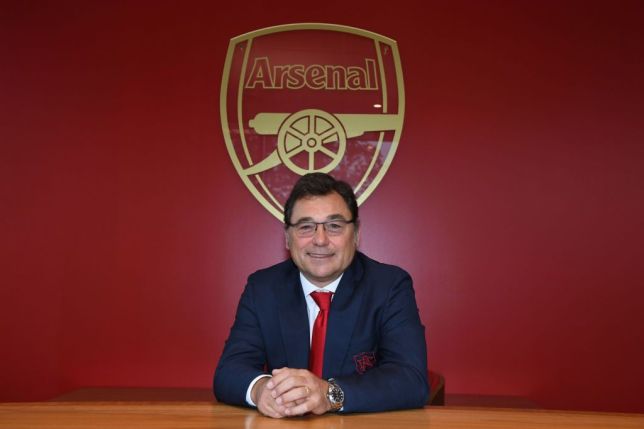 Raul Sanllehi - Man with a plan?

Please remember the week commencing 17th of June 2019. As this could be one of the most significant weeks in recent Arsenal history. It marks the change from fire fighting with random ill thought out high value signings, designed to appease the fan base. To a strategy of internal development that will tilt us into a club attempting to become a UK version of Borussia Dortmund or alternatively a Monaco. Both these clubs have managed to compete against the financial powerhouses of Bayern Munich and PSG.

The design and build will be a resurgence, using youth to provide power and dynamism. I’d bet good money with comeon that there will be no more mention I suspect of being a Bayern Munich with no plan to get there.

We could say we have been here before with project youth, however Project Youth Version 1.0. was managed by an autocrat who accepted little input from specialist experts and whose skillset was already being blunted by a new generation of managers.

To add to the dilemma the majority of our fanbase 10 years ago would not have stood easy with Wenger’s removal and any obvious disquiet in the boardroom would take a further 7-8 years to show any public face.

Raul Sanllehi - a divisive figure to some - has quietly put together a fit for business structure. The thing that Raul can offer is an understanding of corporate governance. Please bear with me as you cry “but it’s just a game!” The point is Tottenham and Liverpool have played the last three years sublimely whilst Arsenal and Man United have blundered from one disaster to another. We need to sharpen our skillset and professionalise ourselves. We cannot continue as we are. We need to diverge from the strange United / Arsenal symmetry. Let United pay £500,000 a week to Pogba. We have are trying to escape the £350,000 a week Ozil.

It appears part one of the necessary action was to deconstruct Ivan Gazidis’s confused lines of command.

What was Sven Mstinlat promised? It seems very much the offer of Raul’s role. Yet Raul is first and foremost an executive functionary - according to at least some gossip. Sven sacked some highly thought of scouts and then proceeded to be an absent figure. Next we have seen the sacking of Darren Burgess who appeared to overlap into Shay Forsythe’s territory. It was Darren Burgess who sacked the highly popular Colin Lewin. Darren Burgess was seemingly running on old ideas and was a fixture during Liverpool’s low period around the time of Roy Hodgson’s reign.

Arsene picked Darren Burgess personally. Was he the most compliant interviewee rather than the best qualified?

So Raul’s first two removals may actually be popular within the club and give clarity to the structure.

We are now according to well placed sources bringing in Edu.

I personally breathed a sigh of relief that the proposed Director of Football Monchi took the easy route back to mid-table club level in Spain. Edu in contrast has built up his experience within the South American football environment but also knows personally what character a player will need to have to play Burnley away on a freezing cold evening. Edu has walked the walk, plus compared to say Rio Ferdinand (who Man Utd are considering) does have the smart links into South America power structures.

Earlier this week we saw the announcement of the reasons why Steve Bould and Freddie Ljungberg have carried out a swap.

The talk was all about transition with Freddie guiding the youth into 1st team intergration and at last Steve Bould can regain his mojo whilst driving youth performance, an area he was originally excelling in. He will take an overall head coach position with oversight of Per Mertesaker as well as deciding with Freddy how much challenge any one young player can be immersed into. This should reduce the risk compared To Wenger’s strategy of throwing in youth no matter the opposition. Arsene effectively helped create the climate to sack himself in that 2018 FA Cup exit against Nottingham Forest. A new overall philosophy should be a controlled climate and limited exposure to physical and psychological damage. We can think of a number of players like Johan Djourou who was destroyed by too much exposure to soon. It should be remembered that Senderos was considered at one stage to be the best for his age in Europe.

Finally I will look at the removal of the autocratic Management Structure and our new vision. Our Coach is now a very important cog, but a cog nonetheless, if Emery is sadly unable to deliver in the job. The specification is clear, the transition coaching is there. The DOF and executive structure is in place but not least a new vision for the way forward. It is therefore a simpler matter to match the right candidate.

When I attended the infamous supporters event where Ivan Gazidis said he’d searched the earth only to find it was Arsene sitting next to him who was his top choice. The whole project at that time was about images of charity endeavour in the third world and some unmeasurable labelled as “class”. We were made to feel very good about ourselves in our mediocrity.

We are finally under Raul moving back to our raison d’etre of being first and foremost a football club and with a plan to actually create a meaningful change.

I believe we are recovering and finding our feet at last. What we will need is at least three years of patience to allow the new Arsenal to flourish. This could just as likely be under Emery or a new manager.