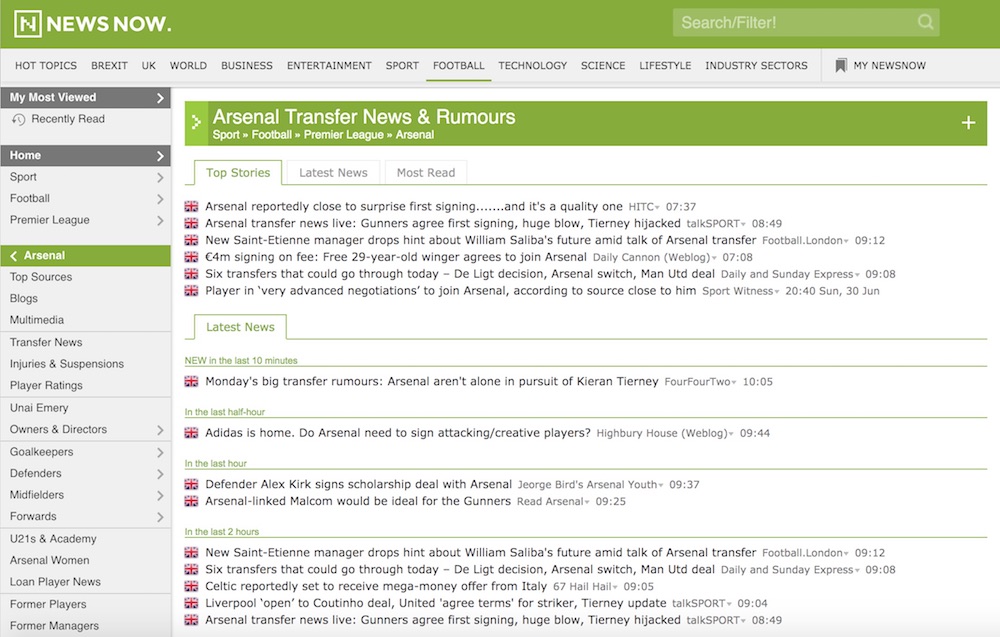 Clickbait - Can you resist?

There was a time when I used to keep a closer eye on NewsNow's Arsenal page during the summer. But I’ve lost interest in maybes these days. The law of diminishing returns eventually has its effects. So many players the club is linked with, and eventually, something actually happens… although sometimes not that much.

Remember the summer of 2015? The club signed Petr Cech… and nobody else. Cash sat in the bank and it wouldn’t be too long before the transfer market exploded and the cash was a lot less valuable in terms of what it could buy you.

The two current stories that have even managed to get my attention are the pursuit of Celtic left back Kieran Tierney and the idea that the club might be able to afford the signing of Wilfried Zaha from Palace. And I have some hot news on Tierney… he attended Toy Story 4 at a Glasgow cinema last night. Just what we need, eh? Another playboy footballer. Back to the plot, and with only £44 million to spend, this would certainly mean player sales to get Zaha, unless Arsenal were to do the unthinkable and actually speculate to accumulate. And people, that isn’t going to happen.

However, one has to wonder what the solution is at centre-back. Laurent Koscielny did better than expected on his comeback for injury, but he was exposed in the Europa League final as not having the quickness of body and mind that he once did, when Olivier Giroud opened the scoring. The Arsenal captain isn’t getting any younger. Sokratis was probably been the pick of the centre backs last season, so one figures the plan is for him to partner a fit again Rob Holding, although if Unai Emery is to consistently play a back five, another body will be required. Koscielny, Monreal, Mustafi, Mavropanos, Chambers, Bielik. The club are not light on numbers, but there are concerns over quality. Bielik has had a decent spell away from the club, but we can’t know as yet whether he is going to turn into the real deal at Arsenal.

I understand the clamour for Zaha, although it’s a legitimate question to ask what is wrong with the club’s current forward options. The two main strikers scored plenty of goals between them. Sure Emery could use the danger posed by Zaha, but is there any way the club could afford him without letting Aubameyang go? I suppose the thinking is that Zaha is three and a half years younger, but he’s not a prolific goalscorer in the way that Aubameyang is. Alexandre Lacazette has been at the club for two seasons and has scored goals, but not at the same rate as his strike partner.

My feeling is that Arsenal need to focus on getting things right at the back as their priority. Given they have so little to spend, it feels like a real curate’s egg of a transfer window. I suspect the club will want to do something that will excite supporters though, so rather than beef up the central defence, they will let Aubameyang go for the buzz Zaha’s arrival will provide.

One thing’s for sure though. I won’t be hanging on the updates provided by various websites online, whose business is to get you to visit them in the first instance and stay there once you do (clickbait – the mailonline has to be the worst for that particular Pandora’s Box). When someone is actually, genuinely signed, I’m sure I’ll find out about it soon enough. Until, then, I am enjoying the summer, a bit of cricket and some Women’s World Cup! And the Tour De France starts next weekend… when Arsenal’s pre-season begins with the under 23s playing at Boreham Wood (the first team squad do not return to training until next week). So six more weeks of transfer speculation, some actual signings, some departures and doubtless thousands of online stories about dozens of players Arsenal might be interested in. Wake me up when it’s over.