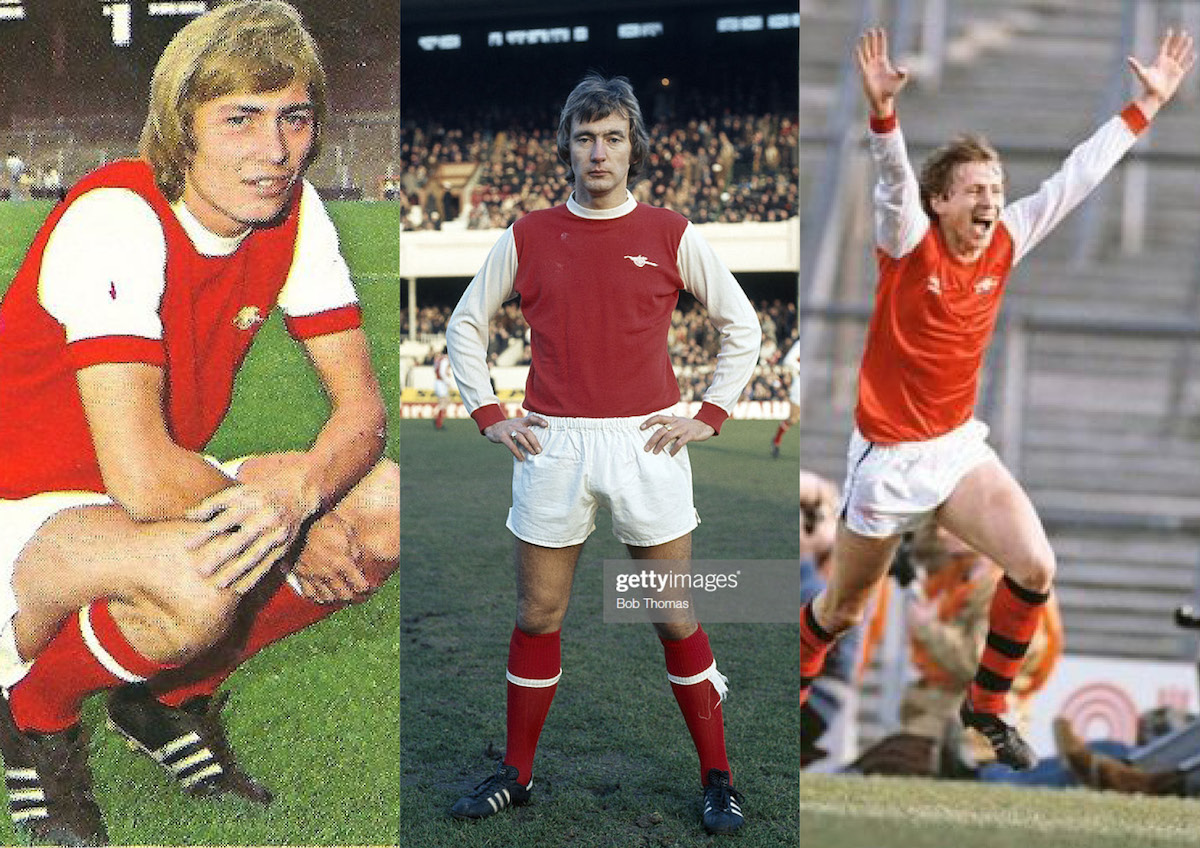 It was Alan Hudson’s birthday recently, and social media was full of messages of good wishes to, and fond memories of, one of the great 1970s footballing mavericks. Alan’s talent was one which still flourished within the physically intimidating, and helter-skelter atmosphere of football which prevailed back then, one which could push creativity and intelligence, at times, to the margins. Hudson’s career at Highbury was brief, too brief by far, but still contained enough moments which echo down the years, and resonate with supporters of a certain vintage; passages of games which stand as a testament to a player who burst on to the scene full of promise, verve and brio, but who departed leaving only a trace of the complex and satisfying tastes he had within his gift to bestow. It is forever a regret that Hudson’s Arsenal career is one which ultimately has a sense of disappointment about it: that occasions like his second half substitute appearance against Man City in a League Cup quarter-final replay in 1978, when he turned the game our way, came so bafflingly infrequently.

Hudson’s Highbury era sits bookended, appropriately enough, by two similarly blighted, frustrated, and truncated Arsenal careers, two players who came to North London, one at the behest of Bertie Mee, the other of Terry Neill, ready to blaze a trail in the dark skies which hung over Islington at times in the seventies and eighties; but both of whom left behind them nought but a tangible disappointment and sadness at their leaving; and now, looking back, a realisation too on my part that both were perhaps footballers who merely appeared at the wrong times; men at odds with the nature of contemporary football as it was in the mid-seventies; and then 1983: footballers who would flourish in the modern game?

In late 1974, with Arsenal in the doldrums, embroiled in the first of two successive battles against relegation, Bertie Mee went shopping north of the border and came home with a young midfielder from Hibernian, Alex Cropley. Making his name with the Edinburgh side in the early seventies, he featured in Hibs’ famous 7-0 victory at Tynecastle on New Year’s Day in 1973, scheming, assisting, and scoring one goal himself. Five up in 37 minutes, Hibs destroyed their rivals with Cropley’s goal acknowledged as the best of the lot, a dipping volley from outside the box. Alex had been 21 at the time, a new addition to ‘Turnbull’s tornedoes’, who that season beat Celtic at Hampden Park to lift the League Cup. In an interview with The Scotsman Cropley was described thus:

‘Modesty forbids Cropley to point out that he was also special. Not only did he have a sweet left foot, he knew how to find space where others couldn’t. Although slightly built, he was wiry and fearless in the tackle’

Originally hailing from the English garrison town of Aldershot, where his father briefly played professional football, he never-the-less quickly graduated to full Scottish international honours in October 1971, benefiting from the Scottish FA relaxing hitherto stricter eligibility rules; indeed he made his debut in the same game as our own Bob Wilson, who similarly benefited from the same rule change. But in 1972, as the season built towards a climax, which for Hibs was a Scottish FA Cup final, Cropley received the first intimation of what was to blight his career from there on in. Playing at Brockville, against Falkirk he had his ankle broken by non-other then Alex Ferguson. Cropley not only missed the show piece occasion at Hampden but was left with a weakness which would compromise him from that point onwards.

As he recovered, Arsenal, in the throes of transition, put in a bid for him of £150,000, rivalling a similar one from Chelsea: and Cropley chose Highbury, saying that, “Arsenal was a learning curve…big city, big club, marble halls. Wonderful!” Cropley broke his leg in January 1975, but returning to full fitness by the start of the 1975/76 season he quickly became a regular playing 19 games, scoring five goals before a another break to the same leg again pretty much put paid to his time with the Gunners. However, in that period at the start of the 75/76 season, although only amounting to a handful of matches, Cropley showed enough glimpses to have won over the Highbury crowd with his range of passing, his time on the ball, and combative approach – and in so doing he provided a pre-echo of the qualities which a young Paul Davis would soon be bringing to the Arsenal midfield. A standout recollection is his performance against Man City at Highbury on 4 October, 1975 in a 3-2 defeat: Arsenal’s midfield that day was: Kelly, Ball, Cropley, and Brady - a tasty ensemble! However, when Neill took up the reins at Highbury, Cropley soon became superfluous to requirements. On leaving the Marble Halls, Cropley said,

“I would like to have stayed there, but they had so many good players coming through like Liam Brady and Graham Rix.”

With Villa he won the 1977 League Cup, and became a firm favourite before a fourth break did for him. A tackle from West Brom forward Ally Brown left poor Cropley with his left shin hinged in a right angle.

“I was never the same after that…I can remember how it happened, how I was lying. I can still smell the grass. I looked at my leg and saw a big hollow where the break was”.

Cropley soldiered on, but at the age of 32, called time on his career in 1982, just as a very different kind of player was about to sign for the Arsenal fulfilling his dreams, following protracted negotiations which only added to the glamour and mystique he represented. Say the name Vladimir Petrovi? and a faraway look appears in the eyes of most middle aged Gooners; be sure too they are thinking of what might have been! The Serbian footballer who has since been coined the ‘adored failure’ made a mere handful of appearances for the Arsenal but left an impression totally out of kilter with such a small body of evidence.

After joining Arsenal on a summer training camp in 1982 and looking every inch the replacement for Liam Brady the club had searched for, he was curtly told he could not after all sign for the Gunners due to a Yugoslavian rule which stipulated a player could not play abroad before the calendar year in which their 28th birthday falls and Petrovi? would not be 28 until 1983. The move fell through, with Petrovi? returning to Red Star Belgrade a “sad and disillusioned young man”. Neill though was nothing if not persistent and maintained contact with his man and as Christmas approached Arsenal were offered the chance to galvanise the deal, with Petrovi? coming to Highbury initially on a loan deal costing £40,000 with the option to make the deal permanent at the end of the season. He had lifted the spirits of the team at the summer camp and almost immediately reconnected with the club when he finally arrived, setting up a chance for Woodcock on his debut which caused Alan Sunderland to spontaneously break into a round of applause. In the next home game he cracked home a sizzling free-kick which Jon Spurling has commented unleashed a surge of adoration for the new player. Drifting right he was quickly offering a nice counter-balance to the creativity Sansom and Rix provided down the left. But for all the promise and Petrovi?’s undoubted ability and technical excellence as early as his second game Neill and Howe were already fearing the little man may simply not be built to withstand the rough house treatment which was part and parcel of the domestic English game, nor the demands of 60 games a season. Petrovi? himself conceded he did not tackle back, he was there to create but he couldn’t create without first finding space and time to think, and in English football there was neither space nor time. After one brilliant display, when he ran the show, against Villa in the FA Cup quarter-final which saw the Gunners win 2-0 with a goal from the maestro himself, his and Arsenal’s season drifted away into obscurity. Arsenal politely refused to take up the option and for a second time Petrovi? returned home to Belgrade this time with an air of permanence about it. He later said that he was made tearful by some of the letters he received from supporters after he left, offering their thanks and support to him. Stewart Robson then still a relatively young man claimed Petrovi? was the most technically gifted player he had ever played alongside, going further to suggest that in today’s climate he would have flourished: for as a footballer he has, and I say it quietly, been likened in technique and intelligence, to Dennis Bergkamp on more than one occasion.

And perhaps there, in Robson’s assessment resides a truth, both poignant and frustrating. Cropley, Hudson, and Petrovi? represent a trinity of varying disappointments. It is so easy to think of Petrovi? fitting into an Arsenal midfield under Wenger, or any modern day super-club; likewise Cropley whose ability was ultimately literally cut down by the raw physicality of seventies football which for good or bad is no longer a part of the game; he too would have shone. Hudson though offers a compelling dilemma: is it that there remains a sense of contribution from the man himself to his ultimately not fulfilling the promise of which his career always suggested; an element of self-inflicted harm not present with Cropley or Petrovi?? Unquestionably all three would have suited modern football, indeed suited modern Arsenal. My face lit up the day we signed Hudson, Cropley was a talent, and Petrovi? gave us a taste of what would be regularly served up at Highbury 20 years later: so my gratitude at seeing them in Arsenal’s red and white is always one counter-balanced with regret born of football’s greatest component: what if?